The Tour de France is one of the coolest things on two legs operating two wheels, but it’s such a commitment of time, effort and frequent flyer miles to check it out. Then they ride by and it’s over. Fortunately, there are other options in bike racing — whether you’re a participant or a spectator — a bit closer to home. Formerly known as Tacoma Twilight Criterium, the Proctor Station Criterium consumes four blocks in Tacoma’s Proctor District today. Starting and finishing in front of Peaks and Pints, cyclists race down North 26th Street, turn right onto North Madison, race east on North 27th Street, turn right onto North Washington Street and head back to the start/finish on 26th. It’s super cool. Expect lots of spandex (for aerodynamics), and lots of good times, especially if you’re watching the race from Peaks and Pints enjoying our special beer flight, Craft Beer Crosscut 6.30.19: Flight For Proctor Criterium. 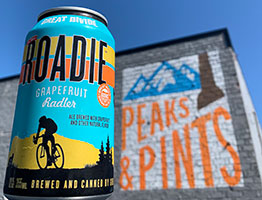 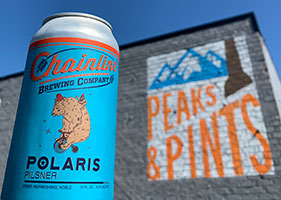 Released in 2012 by the Hop Research Institute in Hull Germany, Polaris hops were bred as a dual purpose hop with an incredibly high alpha acidity and essential oil content that leads to very bold tastes and distinctive flavors — including contributing to bold floral and fruit notes with a slight hint of mint, which describes Kirkland, Washington’s bicycle-themed brewery Chainline Brewing’s Polaris Pilsner. The 2016 Great American Beer Festival silver medalist pilsner has a mint-like flavor while still maintaining its Noble hops lineage. Bohemian malts and yeast provide the body you would expect from this style pilsner. 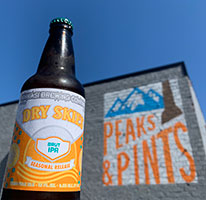 Tacoma’s weather forecast calls for dry skies — all the sun, a high of 79 and a north wind at 10 mph. it’s a little on the warm side for the racers, but at least it’s not raining. Ninkasi Brewing’s Dry Skies Brut IPA captures these fleeting kind of days when the sky is clear and unending, and everything is golden. It’s crisp and light, with a spark of citrus, each popping bubble a tiny celebration that lifts your spirit. 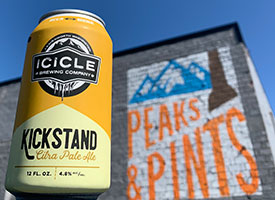 “You can’t deny the value of a cruiser bike’s kickstand. We put that same undeniable value into our newest beer, Kickstand Citra Pale,” states Icicle Brewing’s description of their pale ale. It’s a highly drinkable pale ale packed with citrus flavors and aromas. The beer stands firmly on a foundation of Warrior hops for a pleasantly bitter base and then cruises to its destination on the cone-tails of Citra hops. Kick back at Peaks and Pints, watch the Proctor Station Criterium racers, and enjoy the Leavenworth brewery’s easy drinking ode to the little piece of metal that keeps your cruiser classy. 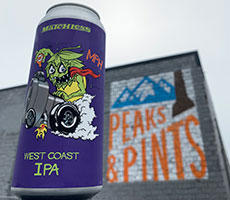 Criteriums, or Crits, are high-speed events with pro races often averaging up to 50 km/h (31 mph), making aerodynamics a large factor, even in the pack. Handlebars with a steeper curve than most road bikes, as riders spend most of their time riding the drops. Enjoy Matchless Brewing‘s MPH West Coast IPA with its huge in citrus candy notes, balanced bitterness and plenty of hops while the cyclists whiz by Peaks and Pints. MPH is dry so you can keep on drinking.