Happy National Almond Buttercrunch Day! The crunchy candy, sometimes called just buttercrunch but other times referred to as almond buttercrunch, or here in Tacoma: Almond Roca. In 1914, Harry Brown and J.C. Haley started a candy company in the City of Destiny. Brown & Haley’s taffy chews and butterscotch balls became popular with soldiers stationed at Camp Lewis. After this country’s entry into the Great War in 1917, the population at Camp Lewis grew larger.  Not surprisingly, the increasing demand for the new company’s sweets kept pace. After the WWI, Camp Lewis’ population shrunk. In 1923, the two confectioners’ efforts resulted in the creations of a crunchy, log-shaped candy piece comprised of a buttery toffee mixture wrapped up in a coat of chocolate and diced almonds. Pleased that the almond and chocolate coating made the candy less messy, Brown handed out samples to Tacoma’s residents, including Tacoma Public Library librarian Jacqueline Noel. She named it Almond Roca. In celebration of National Almond Buttercrunch Day, and Almond Roca, Peaks and Pints presents a flight of beers brewed with almonds that we call Craft Beer Crosscut 6.29.19: Flight of Almond. 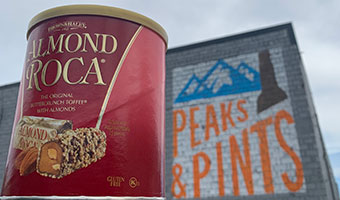 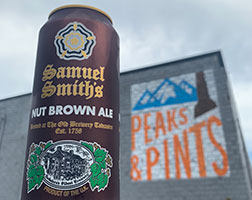 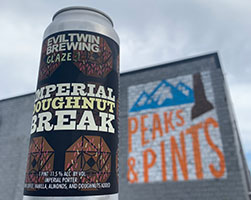 Once you’ve started the day with a few hot glazed, you’re probably not going to be getting much work done anyhow. Might as well start drinking, huh? A twist on Evil Twin Brewing‘s popular Imperial Biscotti Break, an imperial stout brewed with coffee beans, Imperial Doughnut Break imperial porter is made with almonds and bags full of glazed doughnuts dumped into the boil. It’s the sort of beer that gives Jeppe his reputation and it was completely delicious. A dark espresso color with slight red notes, we detected marzipan and oxidized coffee on the nose. Appropriately, the brew smells similar to a doughnut shop — a good sign! The mouthfeel is unique — it feels like our mouth is coated with doughnut glazing and the beer tastes like a doughnut. 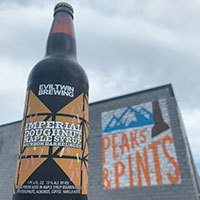 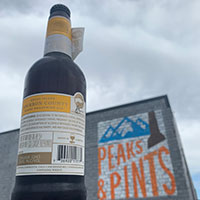