At 50 years old, people rarely go to parties anymore, and not because everyone is younger and better-looking than they are (even though they are), but because 50 year olds can’t hear anything anyone is saying. Huh? Can someone turn down the techno? Mostly they nod. Got a Bitcoin theory you’re dying to talk about? Fifty year olds would be the perfect people to tell it to. They can’t tell you you’re crazy if they’re only getting every fourth word. Fifty year olds don’t go to cool restaurants because of throbbing chooka-chooka-unh-unh beats. Beer? Probably not rich, barrel-aged stouts. It’s all a fast downward slide into retirement, old age, complete invisibility and being of no use to anyone at all, except Big Pharma and the people who make those creepy robotic adjustable beds. You get the picture.

Then, there is recently turned 50 Phaedra Russell Miller. Born in Kansas City, Missouri, but transplanted to Tacoma via her Air Force father and his McChord Air Force Base gig in 1972, Phaedra is a cool cat. Her coolness doesn’t involve her Stadium High School graduation certificate, her after school gig with a bankruptcy attorney afterschool or her many years with Frank Russell Investments (yeah, she’s wicked smart). And, yes, she’s down with all the social media skills via her command of the words and pictures for Parkway Tavern/Hank’s/Cole’s/Terry’s Office Tavern, which is also cool. She lives in Proctor; she knows everyone; she runs a book club; she loves music; she teaches children; she has a philanthropic heart; she hangs out at Peaks and Pints — ha ha ha ha all cool.

No, the reason why we love Phaedra is her passion for rich stouts. “Oh, the flavors — so rich, sometimes complex and when barrel-aged … yum,” says Phaedra Russell Miller. Cool.

Tonight, half of Tacoma will celebrate Phaedra’s age at Peaks and Pints. The crowd size isn’t surprising for all the reasons mentioned above. Peaks and Pints’ present to Phaedra, and our patrons, is an all-day beer flight of her favorite elixir — rich stouts. Happy Birthday Phaedra! Enjoy Craft Beer Crosscut 6.23.18: A Phlight of Phaedra Russell Miller. 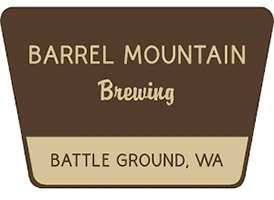 When you think of mountain cabins, many things come to mind: wood, saws, wood, ski hardware, wood, canoe oars and wood. In Battle Ground, Washington, there’s a mountain cabin motif brewery with all that goodness, plus a chair made of ropes, metal siding and a bit of Kentucky shabby chic. Not only did Barrel Mountain Brewing owner Troy Steigman bring the outdoors indoors to a former Laundromat, but he also added a scratch kitchen, well-equipped brewery and hired brewer Ryan Pearson, formerly of Green Flash and La Quinta in Southern California. The beers reflect the expertise Pearson brings to the table, with a variety of well-made styles, including his 2016 GABF bronze medal winner Starway Stout. Pouring jet-black with a tan head, Starway hits the nose with good roast. And the roast continues to the tongue with bold coffee, dark chocolate and a big toasty finish.

In 2002, Founders Brewing Co. wanted to age their Breakfast Stout in bourbon barrels. A call to Jack Daniels with a request to use their barrels was accepted as long as they picked them up. The first run was a success. Something magical happened in the barrel. The recipe needed refinement since the bourbon notes were overwhelming in the beer. The solution was to create an imperial (higher alcohol content) version of Breakfast Stout. The result is Kentucky Breakfast Stout, or KBS. Indeed, an imperial stout brewed with a massive amount of coffee and chocolates, then cave-aged in oak bourbon barrels for an entire year. Expect intense flavors of strong coffee, chocolate fudge, bourbon, oak, minimal booze and a sweet vanilla finish.

Consider space. Albert became the first monkey in space June 11, 1948, when NASA sent a V2 rocket carrying him up 83 miles. Laika the dog became the first Earth-born creature to orbit the Earth when the Russians sent her into space atop a Sputnik rocket on Nov. 3, 1957. Countless astronauts have since ventured into space, traveling as far as the moon. So is it surprising that Eugene beer maker Ninkasi Brewing decided to launch several vials of yeast into space aboard a rocket and then retrieve the yeast to brew beer from it? Live long and prosper, Ninkasi. In October 2014, six vials of brewer’s yeast traveled up 77.3 miles aboard a UP Aerospace Inc. rocket, returning safely to Earth and cold-transported back to Ninkasi’s lab in Eugene, where it was propagated and tested before being used to ferment Ground Control, a rich, complex imperial stout brewed with Oregon hazelnuts, star anise and cocoa nibs, hops of Apollo, Bravo and Comet, and fermented with an ale yeast that survived a trip to space and back. Enjoy this creamy, milk chocolate stout with almonds, touch of vanilla, bourbon and a little licorice brewed in 2016.

The 12th edition of Deschutes Brewery‘s The Abyss barrel-aged imperial stout made its official debut Nov. 17 in the Deschutes pubs on Bond Street and Portland’s Pearl District. It was eventually shipped across the nation, including peaks and Pints in Tacoma’s Proctor District. As always, The Abyss is actually a mixture of several stouts. It’s brewed with black strap molasses and licorice, with vanilla beans and cherry bark added. Half of the results are then barrel-aged — 21 percent in oak bourbon barrels, 21 percent in oak wine barrels, and the remainder in brand-new Oregon oak barrels — and the mix is what’s provided in the wax-topped bombers. The 2017 imperial stout contains flavors of chocolate, licorice, coffee, molasses, vanilla, cherries and wood — all in perfect balance.

Destihl’s Cerise imperial stout is brewed with sour cherries and Belgian yeast then aged in oak barrels. It pours an opaque black with very little head and khaki lacing that hugs the fringe of the glass. You don’t have to stick your nose down far to catch a huge whiff of tart cherries and chocolate.  First sip produces tart cherries followed by a crashing wave of milk chocolate and oak tannins. This Belgian-style imperial stout has a smooth, silky body and bone-dry finish.