Craft Beer Crosscut 4.27.19: A Flight of Kulshan and Occidental

April 5-27, 2019, Peaks and Pints pitted 64 of Pacific Northwest’s best in a pillowy head-to-head battle of pilsners. We speak, of course, of the Tournament of Beer: Northwest Pilsners. Sixty-four Washington and Oregon pilsners were selected and seeded by the public in February 2019. Some pilsners fell easily by the wayside, either faltered due to a defective mash tun paddle or simply because they faced a superior opponent. Saaz by Saaz, the Pacific Northwest drank its way through the first two rounds followed by the Sweet Wort 16, the Hot Break Eight, the Final Four and today’s Championship Game between Kulshan Pilsner and Occidental Bohemian Pilsner with online voting ending at 4 p.m. and resuming at 5 p.m. live at the Tournament of Beer Party at Peaks and Pints. The live vote will close at 8 p.m., tallied and the Northwest Pilsner champion will be announced at 8:30 p.m. In conjunction with today’s Championship Game, Peaks and Pints offers a sample beer flight of craft beer from Kulshan Brewing, the division champion from Washington state, and Occidental Brewing, the division champion from Oregon. Drop by Peaks and Pints today, vote and enjoy our Craft Beer Crosscut 4.27.19: A Flight of Kulshan and Occidental. The fifth beer in your flight is your choice: Kulshan or Occidental.

Craft Beer Crosscut 4.27.19: A Flight of Kulshan and Occidental

Occidental’s Kölsch reinforces that brewery’s reputation for making great German beer styles. The kölsch is made with ale yeast and is fermented warm, yet commonly aged at colder temperatures, making it a hybrid between the lager and the ale. This is Occidental’s homage to the delicious ale of Cologne, Germany. It’s effervescent with subtle fruity sweetness, dryness, and a light- to medium-body. Crisp and dry, it is clean and lager-like, with a pleasant, slightly spicy hop profile supplied by German Perle. 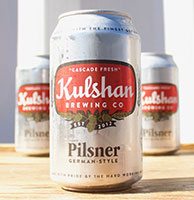 For the past couple years, when a mention of Bellingham breweries awards comes up, there’s always a discussion that starts with “Kulshan, again?”, but even though the rest of Bellingham’s growing craft beer scene is pretty damn awesome, the stamp that Kulshan Brewing has put on Bellingham can’t be denied. The brewery’s German-style “Pilsner” grabbed a gold medal at the 2017 Best of Craft Beer Award and a silver at the 2018 Washington Beer Awards, no doubt for its traditional clean and bready malt flavors supported by herbal, floral and slightly spicy hop aromatics and flavor from Hallertau Magnum, Hallertau Perle, and Spalt Spalter hops. With a medium body and a dry finish, Kulshan Pilsner is going to be hard to beat.

Long before the Portland neighborhood of St. Johns finally hit its long-anticipated growth spurt, the Occidental Brewing Company set up shop near the bridge and quietly started brewing some of the best German-style ales and lagers in Oregon. Thanks to an expansion into a Wursthaus, you can get a grilled brat, as well as a number of other options, to go with your Bohemian-style pilsner. Occidental Brewing Co. was founded in 2011 by Ben and Dan Engler. Focusing on largely traditional continental European beer styles, Occidental has won numerous awards. Plus, gotta love a pilsner in a big-boy, 16-ounce tallboy can. It’s an easy-drinking, Bohemian style pilsner on the fruity/malty/grainy/grassy side of things, but gets a crisp kick from the Czech Saaz hops.

The Russian Imperial Stout originates from England as an export to the Baltic states and Russia. It takes its name from its popularity with the Russian Imperial Court. Kulshan’s award-winning version is rich, robust and captivating, with chocolate, coffee and smoke character developed from three levels of roasted barley. Taste starts with a mild sweetness, then progressively moves to dark and deep cocoa bitterness at the finish. 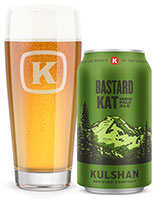 Crisp and snappy up front, smooth in the middle, and dry in the finish, Kulshan’s highly drinkable and flavorful Bastard Kat IPA grabbed gold at the 2015 Washington Beer Awards. Brewed in the West Coast IPA tradition with a prolific full hop flavor and aroma of Cascade hops, this beer balances said hop’s grapefruit and pine notes with caramel, bread dough and white cake.