Craft Beer Crosscut 3.1.19: A Flight of pFriem Now In Cans

Seattle native Josh Pfriem began homebrewing while at Western Washington University in his early 20s then moved to Utah as a ski bum. He worked at Utah Brewers Cooperative for a few years before moving back to his old college town of Bellingham to brew at Chuckanut Brewery, where he helped win the Great American Beer Festival Small Brewpub of the Year in 2009. He moved to Hood River, Oregon to work at Full Sail but left in December 2011 to open pFriem Family Brewers — across the highway from Full Sail along the banks of the Columbia River — in August 2012. Over the past year pFriem has upgraded its facility and enhanced its infrastructure to make way for canning. Today, the first pFriem cans — IPA and Pilsner — arrive at Peaks and Pints. In celebration, Peaks and Pints presents a flight of pFriem that we call Craft Beer Crosscut 3.1.19: A Flight of pFriem Now In Cans.

Craft Beer Crosscut 3.1.19: A Flight of pFriem Now In Cans

pFriem’s brewers dump 1,000 pounds of fresh Draper blueberries into their Lambic-style base beer to create Bosbessen, which is more blueberries than last year. Using a malt bill that consists of 60 percent malted barley and 40 percent wheat, the brewers use aged hops but without a coolship. Instead they used a heat exchanger to chill the wort before inoculating with a lambic mixed culture of yeast and bacteria. pFriem brewers then mature the base lambic-style in French oak barrels for six months before adding the blueberries from Graves Orchards at an amazing 2.7 pounds per gallon. The beer ages and fermented on the fruit for another nine months for flavors of blueberries, funk, some wood, jam and a nice, tart finish. 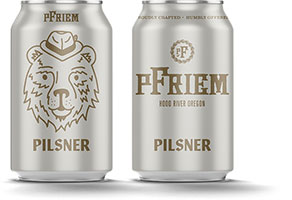 Visually, the pFriem Pilsner may be the lightest beer we’ve ever seen. It pours with a delicate green tint, a fluffy white head, and a crystal-clear complexion. Pastoral aromas of flowers and meadow grains combined nicely with a typical maltiness pilsner scent. The taste is the best part, though, with a deep dryness at the back of the mouth and the faint minerality that’s so crucial to a pilsner. Though it’s a term with varying meaning, pFriem Pilsner highly “drinkable,” and perhaps dangerously so — with its lovely front-end and low carbonation, pFriem’s Pilsner goes down easy as a breeze. pFriem Pilsner is now in cans with a $10.99 six-pack price.

pFriem’s no dummy. They know the combination of hops and the fresh citrus zest creates bright and refreshing flavors. They figured out that a malt bill of Rahr Pale, Simpsons Caramalt, and Simpsons Crystal Dark, plus Chinook, Mosaic, and Citra hops, plus American Ale yeast plus citrus zest from tangelo and grapefruit produces flavors of tangelo, melon, papaya, and ripe fruit with a zesty, bright, and refreshing finish.

An imperial brown ale lives in a similar realm as an imperial stout, but more malt focused, full, strong, and balanced. pFriem uses heritage malt varieties such as Marris Otter and Golden Promise to drive this complex and luscious ale. Then, they take this round beer and age it for one year in barrels that previously housed Macallan Single Malt Scotch Whiskey. These whiskey barrels had an additional life before the Scotch. They were also home to sherry from Spain. The result is an alluring beer that is complex and dynamic that hits the nose with toffee and nutmeg, followed by bold flavors of creamy vanilla bean, Scotch, dried fruit, and cinnamon. Finishes with a touch of sherry and wood smoke, round, and warm. 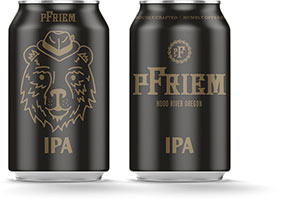 pFriem’s IPA is more of a Northwest IPA than West Coast IPA meaning its hazy and aromatic with assertive bitterness rather than lighter in body and brighter that is typically associated with West Coast style. pFriem’s IPA is brewed with Gambrinus Canadian Pilsner, Simpsons Caramalt, Simpsons Crystal Light and Simpsons Crystal Dark grains with Chinook, Mosaic, Citra, and Warrior hops before it ferments with American ale yeast for strong citrus character along with some tropical fruit aroma. Grapefruit and passion fruit dominate with a slight pithy/woody quality too. The malt aromas are heavily masked by the hops, but grainy sweetness and a touch of caramel come through. It’s a big, hoppy delight. pFriem IPA is now in cans with an $11.99 six-pack price.