In 2010 — with his Siebel Institute education, training in Germany and Belgium, and degree from Yale tucked under his arm — Ben Edmunds opened Breakside Brewery in the quiet Woodlawn neighborhood of Northeast Portland as a restaurant and nano-sized brewery. Breakside expanded to a 3.5-bbl brewhouse while winning their first medal at the Great American Beer Festival in 2011 where they have earned medals each year since. In late 2013 the brewery expanded operations to Milwaukie, Oregon with a 30-bbl production brewery. Many awards and honors followed. This year, Breakside was named Brewery of the Year at the Oregon Beer awards, Best Brewery in the Willamette Week’s Best of Portland issue, and the Gary Sheppard Memorial Trophy for Best New Exhibitor at the Australian International Beer Awards, to name a few. Tonight, Peaks and Pints, once again, welcomes Breakside Brewery to pour their latest craft beer, as well as feature five of them in today’s flight, Craft Beer Crosscut 11.21.19: Flight of Breakside 2019.

Breakside’s The Body Electric Wood-Aged Sour is a mixed culture sour beer that was fermented and aged in oak barrels from two of the brewery’s favorite Oregon wineries. A blend of several different lots of beer from their wood cellar, the finished product comes from 15 casks of beer brewed between August and November 2017. After nearly two years in barrel, this beer showcases a complex array of vinous and fruity notes, including pie cherry, pineapple, and fruit cocktail. Balanced acidity couples with a medium-high level of tannin from aged hops and oak for an elegant and multilayered finish.

Inspired by the family of Fizz cocktails, Breakside aged a citrusy, golden pale ale in second-use Old Tom Gin casks from small distillers around Oregon, then conditioned it on two types of culinary lavender for all the lavender nose and flavor.

When Breakside’s brewmaster studied in Germany, he fell in love with the unfiltered, ruddy, amberish lagers from legendary Bavarian and Franconian breweries such as Hacker-Pschorr and Paulaner. Kellerfest is inspired by these lagers — it balances bready malt notes with German noble hop flavors, and the result is a refreshing, uncommon lager. 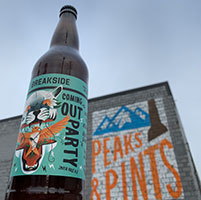 Breakside’s Coming Out Party, which originally began as a collaboration with Comrade Brewing in Denver, is brewed with a couple Down Under hops, plus Mosaic. Taiheke, a New Zealand-grown version of Cascade, is featured prominently in this beer, adding intense lemon-lime character. Big notes of passionfruit and mango come out due to judicious additions of Mosaic and Vic Secret. The tropical, dank, and citrus-heavy hops are couched in a pillowy malt base that makes the finish super soft. 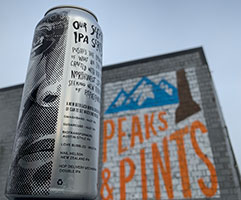 Originally developed at Breakside’s Dekum pub in 2015, Hop Delivery Mechanism is double dry hopped with Azacca and Citra hops, while the “So Cal trinity” of Amarillo, Simcoe, and Columbus anchor down the kettle and whirlpool. The intense hop character comes across as juicy and dank with big notes of orange marmalade, mango, and Froot Loops.