Happiness knows no particular order, and neither does Peaks and Pints Craft Beer Crosscut 10.24.17: A Flight of Happiness.

5% ABV, 6 IBU
Thanks to summer’s stronger sunlight and the extra hours in the day to soak it up, you’re more likely to float through the day feeling energized and optimistic. It has to do with serotonin, a hormone that’s been dubbed the “happiness hormone” by scientists. According to Peaks and Pints, Anderson Valley Summer Solstice is dubbed the “happiness ale.” Anderson Valley makes one of the only cream ales that is also a summer seasonal. Summer Solstice varies remarkably from most of the cream ales in its aggressive use of darker roasted barley. A brilliant copper color in the body and a darker head also show some color from the malt. Slightly sweet but very malty, this brew has an unconventional taste. With hints of caramel in the nose and a touch of spice, it’s become affectionately known as “cream soda for adults”. The unique flavors and superior drinkability make for the ultimate refreshment on a hot summer day. 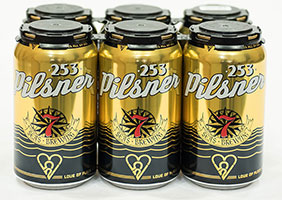 5.2% ABV, 32 IBU
There is a Chinese saying that goes: “If you want happiness for an hour, take a nap. If you want happiness for a day, go fishing. If you want happiness for a year, inherit a fortune. If you want happiness for a lifetime, help somebody.” 7 Seas Brewing and 253Heart joined together to craft a beer that supports the Pierce County community by donating a portion of the 253 Pilsner proceeds to a variety of local non-profit organizations. Two organizations are selected at any one time to receive a portion of the sales, up to $5,000. After the goal is hit the two organizations continue to select small, local, state certified 501C-3 and 501C-6 non-profits. The goal is to find the local non-profit organizations that this money would make a large impact to. In regards to the 253 Pilsner 7 Seas co-owner and head brewer Travis Guterson brewed more than five test batches, with different hops and different malts, to dial-in the recipe. “Travis settled on Sterling and Cascade hops,” says his business partner, Mike Runion. “It’s a Northwest interpretation of a pilsner.” Guterson and Runion brewed the 253 Pilsner with Northwest Pale and Pilsner malt, hopped with said hops, for a 100 percent Washington, refreshing, dry and crisp authentic premium pilsner.

6.6% ABV
As a child, I remember spending hours on a pogo stick — counting each bounce to break my own personal record. My parents were impressed — at least I believed so. So much happiness. Flash forward to July 1995; Engine House No. 9 became Tacoma’s first brewpub. That was big news then and is worth toasting nearly 22 years later. But the real cause for happiness is the birth of one beer in particular — E9 Brewery’s Pogo Stick Simcoe IPA. Known as “Cascade on steroids,” Simcoe hops, obviously, are the main attraction here, and pine is readily identifiable — more needle than cone. As the beer warms, a faint alcohol aroma emerges, which is surprising given the beer’s 6.6 percent ABV, and the woody pine becomes even more prevalent. A slight citrus character—tangy orange—peaks through in the dry finish, but the pine never disappears. 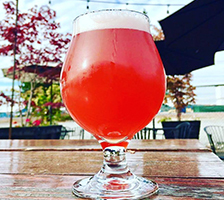 6.7% ABV
Milkshakes make people happy, especially if it’s a milkshake IPAs named Rosy Clouds. Milkshake IPA? The trending style is so delicious, so fruity, so thick and so creamy that it’s like candy — or a milkshake, anyway — to consumers. The milkshake IPA style seems to have emerged as a sort of exaggeration of the hazy, New England-style IPA, which are brewed with certain strains of yeast that leave particulates floating in the beer then not filtering said beer. Milkshake IPAs, similar in concept, go a few steps further as brewers add things like lactose, malted oats, flour, vanilla and fruits containing pectin. This results in a thick and frothy — and vanilla-fruit flavored, such as Skookum Brewery’s Rosy Clouds IPA. Skookum’s milkshake IPA is brewed with oats, lactose and conditioned on whole vanilla beans. Hopped with Citra, Mosaic and Simcoe, the Arlington brewery then adds 300 pounds of house-puréed raspberries toward the end of fermentation.