While sometimes used to indicate exceptional quality, cuvée generally means that the beer is a blend. Blending beers pre-carbonation has been a practice for centuries. Ninteenth-century English pubs would typically have a cask of strong, old ale on hand that they’d use to spike milder bitters. Belgian gueuzes are made the same way — they’re usually blends of old, sour beers and young, sweeter beers. Try a raw, unblended sour straight from the barrel and you’ll see why. Blending finished beers has seen a boost in popularity of late (and is far more complicated than the traditional black and tan in a nonic pint). One of the best things about Peaks and Pints’ weekly staff sample night tastings is what happens when the tasting, talking and judging is over: beer blends. We’ve blended just about everything: coffee porters with witbiers, IPAs and wheat beers, stouts and German pilsners, Mosaic pales and blueberry sours. It’s amazing what new profiles you can come up with when you have a little extra beer and the right frame of mind. Today, Peaks and Pints presents a flight of blended beers that we call Craft Beer Crosscut 1.28.20: Flight of Bar-Top Cuvée. 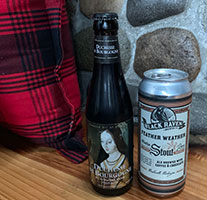 Flanders is wearing a sexy feather today! Tart and fruity Verhaeghe Duchess de Bourgogne and dark, creamy Black Raven Feather Weather stout combine in a drink that really does evoke the experience of a dark chocolate-covered cherry. Duchesse de Bourgogne — named for Duchess Mary of Burgundy, a filthy-rich medieval heiress who suffered an unfortunate (and deadly) fall from her horse — boasts notes of tart plums, black cherries, and that funky, yeasty finish every sour fan demands. When it plays around with Feathers brewed with cocoa nibs and cold pressed coffee, expect a sexy symphony of flavor. As for ratio, the sweet spot is right around two parts Duchesse to one part Feather. 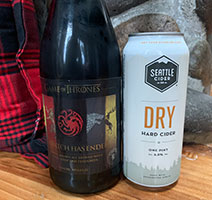 My Apple Watch Has Ended

Brewery Ommegang‘s latest Game of Thrones beer, My Watch Has Ended, is an imperial brown ale brewed with two-row base malt, specialty grains such as oat flakes and chocolate malt, plus maple syrup and fenugreek, an herb with a maple-like aroma and flavor. It’s plenty complex in its own right. Peaks and Pints thinks it could pack a little more punch. Combining it with Seattle Cider Dry manages to highlight the mouth-coating maple quality of Ommegang’s imperial brown, while cutting with a nice, sharp rinse of the cider. A three-to-one ratio of brown to cider takes the throne. 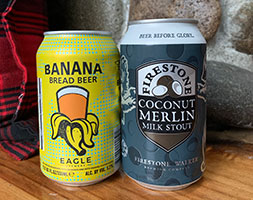 Otherwise known as the “Dirty Banana,” Wells Banana Bread Ale is magical with Firestone Walker’s Coconut Merlin. Banana Bread Beer smells like bananas. Seriously. In fact, Banana Bread Beer not only smells like bananas, but tastes like bananas, too, and not the artificial banana of bubble gum. The flavor is nicely balanced with the hops, the banana component more a whisper than a shout. A two Banana to one Merlin ratio turns the fruit beer into a Banana Mama cocktail with a bit of chocolate sweetness to balance everything out. It looks like muddy water, but by the beard of Merlin tastes delicious. 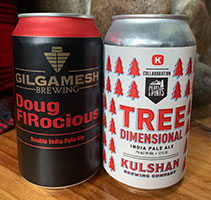 Many of us have a tendency to refer to all conifers as pine trees, which is not illogical considering that the pine family (Pinaceae) is the largest family of conifers and accounts for approximately a quarter of all cone-bearing trees (the definition of a conifer is a tree that bears cones). However, those roughly 200 species in Pinaceae include not just pines, but firs, spruces, cedars, hemlocks and larches. Today, Peaks and Pints presents a Pinaceae blend — our piney and slightly citrusy house beer, Kulshan Brewing Tree-dimensional IPA and Gilgamesh Brewing Doug FIRocious Double India Pale Ale. The result is a piney hop resin IPA with a strong and sweet caramel malt support. 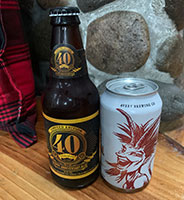 The 40 white Rascals offers the hoppy bitterness of an India pale ale and the body, color, spices and citrus qualities of a Belgian witbier (pronounced “vit”), or white beer. The witbier itself is a style that dates back more than 400 years. In the U.S. they have become especially popular in summertime. Sierra Nevada’s 40th Hoppy Anniversary Ale is a classic West Coast IPA with Centennial, Cascade and Cluster hops for intense pine and citrus with a deep gold color and slight caramel sweetness. We top it off with Avery White Rascal, an authentic Belgian style white ale — unfiltered and cleverly spiced with coriander and Curaçao orange peel producing a refreshingly zesty classic ale.