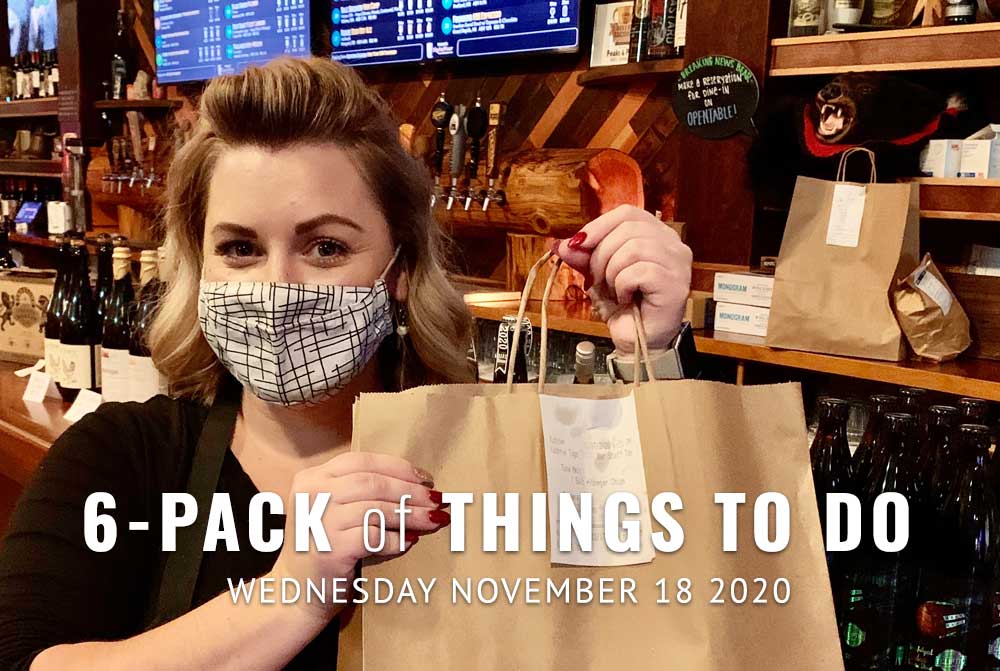 Not-so-unexpected news first: Peaks & Pints, unfortunately, once again, is under state requirement to pause our dine-in service. Starting today we won’t be taking reservations for restaurant dine-in until further notice. The positive flip-side to this whiplash is we still have all our delicious sandwiches, salads, beer, cider, and wine to go with a large load Campfire Crowlers ready for draft pours and more than 800-plus bottles and cans in the cooler. Thanks to everyone for sticking with us through these unpredictable times, your support means the world. Now onto a 6-Pack of Things To Do. …

RESTAURANT RALLY: This is the second to the last day for the Pierce County Restaurant Rally. The promotion offers 30 percent discounts on take-out meals today, and tomorrow at more than 300 Pierce County restaurants, including Peaks & Pints. The discount excludes alcohol and orders via third-party delivery and take-out services. A list of participating restaurants is available at piercecountyrestaurantrally.com. Stop by Peaks & Pints for 30% off carry-out sandwiches, salads, appetizers and our sandwich special. 11 a.m. to 8 p.m., Peaks and Pints, 3816 N. 26th St., Basecamp Proctor, Tacoma

CIDER FLIGHT: Apples were among some of the first crops grown in colonial America. Potted seedlings and bags of apple seeds were brought over on the Mayflower. The Bible-thumping Puritans were not teetotalers. Apple orchards in colonial America usually meant one thing: hard cider. Apples flourished in the fertile soil and friendly climate, and soon apples were a key part of most colonial farms and menus. The popularity of cider in America grew as the nation’s territory expanded. Then, the Temperance movement and popularity of German lager squashed the hard apple cider movement … until 2013. Zealous connoisseurs grow dissatisfied with the mass-produced apple cider sold by far-away, massive corporations. In response, they retreat to their basements and garages and start playing with recipes, learning about fermentation and putting their own spin on the old tried-and-true. Eventually, some hit on flavors in their homemade libation that are so tasty and unique, it seems a shame to hoard it all for themselves. They start putting some in bottles and growlers to share with like-minded friends and family. People flip out. Professional cideries began to pop up. It’s an explosion of craft cideries, and a return to the drinking habits of Colonial America. Today is National Apple Cider Day. Peaks and Pints has created a special to-go cider flight we call Peaks and Pints Pilot Program: Apple Cider Day On The Fly. 11 a.m. to 8 p.m., Peaks & Pints, 3816 N. 26th St., Basecamp Proctor, Tacoma

BOOK CLUB: January is a dying planet — divided between a permanently frozen darkness on one side, and blazing endless sunshine on the other. Humanity clings to life, spread across two archaic cities built in the sliver of habitable dusk. But life inside the cities is just as dangerous as the uninhabitable wastelands outside. Sophie, a student and reluctant revolutionary, is supposed to be dead, after being exiled into the night. Saved only by forming an unusual bond with the enigmatic beasts who roam the ice, Sophie vows to stay hidden from the world, hoping she can heal. But fate has other plans — and Sophie’s ensuing odyssey and the ragtag family she finds will change the entire world. Does this sound familiar? Have you read The City in the Middle of the Night by Charlie Jane Anders? King’s Books’ Feminst Utopia Book Club will discuss Sophie and the book in the King’s Zoom Room tonight. 5:30 p.m., King’s Zoom Room, Photo credit Sarah Deragon/Portraits to the People

CHORAL AND CHICKEN CASSEROLE: William L. Dawson’s choral music has been widely performed in the U.S. since the 1940s. If you’ve sung or heard African American spirituals in a choir concert, you’ve probably encountered his arrangements. He created nearly two dozen of these short masterworks, many premiered by his students in the choir at Tuskegee Institute in Alabama. Dawson’s remarkable Negro Folk Symphony premiered in 1934 to tumultuous acclaim by the Philadelphia Orchestra under the baton of Leopold Stokowski. Why is Dawson’s name not better known, despite the significance of his contributions to American music? Gwynne Kuhner Brown, professor of music history and music theory, will answer this question and others when she and her colleagues dine and down beat in the University of Puget Sound Zoom Dining Room tonight. Four times each year, the Puget Sound Daedalus Society sponsors an evening of scholarship, debate, and dinner, at which colleagues can become familiar with each other’s areas of research and expertise. Tonight, Brown sits at the head of the table to share her recent work and pass the gravy. 6-7:30 p.m., UPS Zoom Dining Room, Meeting ID: 936 6370 7247

THEATER: 6-Pack of Things To Do apologizes for missing last week’s Spacies episode at Tacoma Little Theatre. We were consumed with our Space X application. Anyway, Tacoma’s original space radio series is archived so you can still check it out. Our heroes commander Rash Blasterbelt and Ensign Jock Junior were in for a terrible surprise last week when they were startled by the return of one of their oldest and most insidious villains, Luthor Vile! What evil plan did Vile have in store for them? Click here to find out! Grab an Ecliptic Brewing Barrel Aged Sedna Tiramisu Stout from the Peaks & Pints cooler to pair with the discussion.