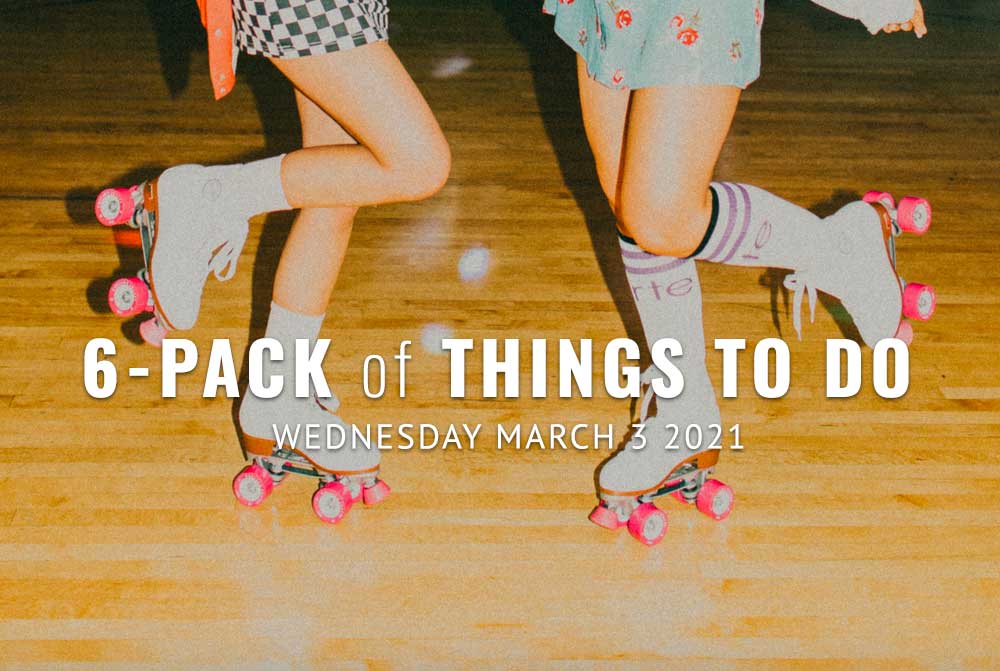 If you’re eager to freshen up your social media feeds, 6-Pack of Things To Do has a couple great selfie backdrops. Remember to social distance and wear masks while you’re out and about, and check ticket requirements before you show up and start snapping. Cheers!

ROLLER SKATING: Racing around in circles really fast is fun. Whether on wheels or blades, skating is a cheap and accessible great time. People have laughs by racing, doing tricks or pushing each other down. Handholding couples can go for a spin to show the world just how cute they are. There is no need to hold back if you have never skated before because after just a little practice you can fly on your own. But such adventures are well worth the haul for the guilty pleasure of flashing back to the eighties with The Gap Band. Tonight, Pattison’s West Skating Center hosts an Adult R&B Skate with DJ Mr. Nyice Guy. 7:30-10 p.m., 34222 Pacific Hwy S, Federal Way

BEER FLIGHT: In the early 1700s, it was common for London pub patrons to ask for blends of the various available brews. Historical documents say the Brits called their mixed beer beverage “Three Threads” using a third of a pint each of ale, lager and a strong brew called “Twopenny.” Eventually, bartenders told the Three Threadheads to take a flying leap off the London Bridge. Around 1730, a brewer named Harwood came up with a solution. He re-created the flavor of Three Threads into a single craft beer called Entire before it reached the pub. This beer came to be loved by porters and other physical laborers, and so earned its name, porter. Today, Peaks & Pints presents a to-go flight of imperial porters. Imperial porter is an emerging American style that falls somewhere between the traditional brown and robust porters and the Baltic porter. Stop by our Proctor District craft beer lodge and grab Peaks and Pints Pilot Program: Imperial Porter On the Fly. 11 a.m. to 9 p.m., 3816 N. 26th St., Basecamp Proctor, Tacoma

BEER: Do you have what it takes to be Canmaster of 2021? Tides Tavern will test your can crushing strength with 16 beers in 31 days. Participants receive a punch card to keep track of their progress throughout the month. There is a limit of three beers consumed in house per day. Those who complete their card will get a limited-edition T-shirt that can only be obtained by completing Canmaster within the month. Canmasters will also be immortalized with their name on the Tides’ “Wall of Fame.” 11 a.m. to 7 p.m. Sunday-Thursday, 11 a.m. to 8 p.m. Friday and Saturday, 2925 Harborview Dr., Gig Harbor

FILM: The 8th Destiny City Film Festival continues virtually with every film available through the end of the festival March 7, including Take Out Girl, the story of Tera Wong (played by Hedy Wong), who will do anything to help save her mother’s struggling Chinese food restaurant. The story begins with Tera dropping out of college — and ditching a side hustle in which she sold her tests and class notes to less-diligent students — to devote herself full time to the restaurant. But when a food delivery brings her into contact with a local drug-dealing operation, Tera sees (illicit) opportunity. Tera’s attempt to break the cycle of poverty puts everything at risk and drives the story toward a powerful conclusion. Photo courtesy of roseraymedia.com

BOOK CLUB: The Tacoma Public Library’s Wheelock Book Club meets virtually tonight to discuss Viet Thanh Nguyen’s The Sympathizer, a New York Times best seller and the Pulitzer Prize for Fiction winner. It’s the story of a Viet refugee from the fall of Saigon making his way in the USA while embroiled in espionage on behalf of revolutionary forces in his homeland. The title comes from the protagonist’s ability to see all issues from both perspectives. If you read it, or would enjoy listening to people who read it, register here. 6:30-7:30 p.m., Wheelock Zoom Room, no cover

COMEDY OPEN MIC: If you’re serious about doing comedy, tonight’s open-mic at the Tacoma Comedy Club is the venue. For starters, it’s a bona fide comedy club, with stage, lighting and seating set up specifically for the art form. Yet the most crucial element is the human one. There’s much to learn from the wide variety of amateurs who hop onstage and bomb; there’s even more to learn from the seasoned veterans who stop by to work through new material. Be sure to bring your A-game. Note: Sign up at 7pm. 7:30 p.m., 933 Market St., Tacoma, no cover