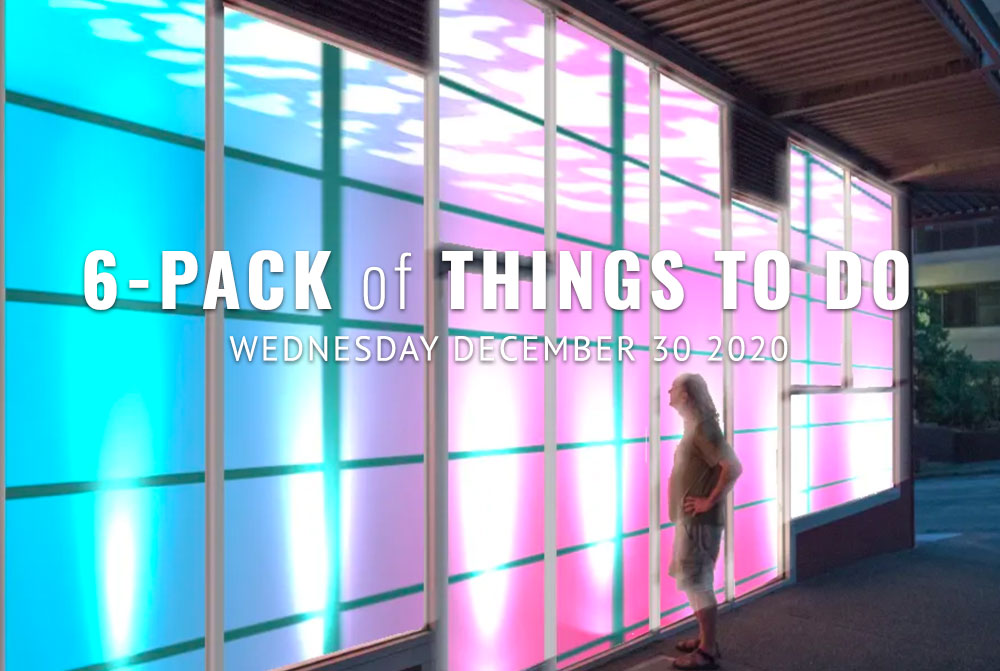 As the year winds down you can either jump on YouTube and track down all the old broadcasts of New Year’s Eve Rock n’ Roll Ball that MTV put together in the ’80s — back when they gave a damn about music and hardcore partying — or partake in 6-Pack of Things To Do. You do you. Cheers!

TACOMA LIGHT TRAIL: “This is such a dark time of the year, and it’s even darker with all the sorrow of the Covid-19 pandemic,” said Rosemary Ponnekanti, director of Tacoma Ocean Fest, who conceived and organized the Tacoma Light Trail collaborative event, in a news reelase. “I really, strongly wanted to do something that would bring hope, unity and joy to the community, and I knew other arts groups and businesses felt the same way.” Indeed. More than 30 artists, arts organizations, businesses and downtown spaces have joined the Tacoma Light Trail — a walking or driving trail around Tacoma’s downtown to see light art. The art — which ranges from projection mapping to video, illuminated sculpture and sheer blasts of light — will be visible in more than 20 locations. An accompanying Sound Trail will pair local music, poetry or sound with each light location on the Echoes mobile app. Both light and sound maps, as well as background information, are at TacomaLightTrail.org. 5-9 p.m., though Jan. 24, 202, free, photo: Mike Figueroa’s Resonance/Murmur at Spacework’s Woolworth Windows, Ninth and Broadway

BEER FLIGHT: It is true that this New Year’s Eve will look different than most, as the coronavirus pandemic continues to keep us from partying like a typical Tacoma rage machine. But, you want to celebrate a little at home. But, you don’t want champagne, especially the cheap stuff that is going to give you one mean hangover, and chances are it could start before the night is through. You’re looking for something different this year. Peaks & Pints suggests you toast 2021 with two classic European alternatives to champagne. The “Champagne of Belgium,” otherwise known as lambic, is tangy and dry with bubbly effervescence. Or, take a note from the Germans and try Berliner weisse, a tart and refreshing style dubbed the “Champagne of the North” by Napoleon. Stop by and pick-up Peaks and Pints Pilot Program: New Year’s Eve On the Fly. 11 a.m. to 8 p.m., 3816 N. 26th St., Basecamp Proctor, Tacoma

GIG HARBOR BREWING: Five years ago, after an exhaustive search for a large enough building space in Gig Harbor, the Gig Harbor Brewing was forced to open in Tacoma’s Nalley Valley. The brewery has 2,500 square feet of warehouse space, with seating for about 30-35 indoors and a sunny brick patio space for outdoor lounging during warm weather. In April of 2018, they opened a second taproom in their namesake city. Today, Gig Harbor Brewing celebrates their fifth anniversary with the release of their new Blueberry Creme Brulee Stout in both taprooms. 3-7 p.m., 3155 Harborview Dr., Gig Harbor; 3120 S Tacoma Way, Tacoma

FANTASY LIGHTS: Have you heard? There’s a two-mile drive along Spanaway Lake lit by more than 300 displays? It’s called “Fantasy Lights,” the largest drive-thru holiday lights experience in the Pacific Northwest. Pass around a thermos of hot cocoa in the car and tune into the pre-set radio station with a special selection of holiday music to truly illuminate your season. Open through Jan. 3, Fantasy Lights has added additional safety measures to keep you and their staff safer throughout your visit. 5:30-9 p.m. nightly, Spanaway Park, 14905 Bresemann Blvd. S., Spanaway, $15-$20 per vehicle