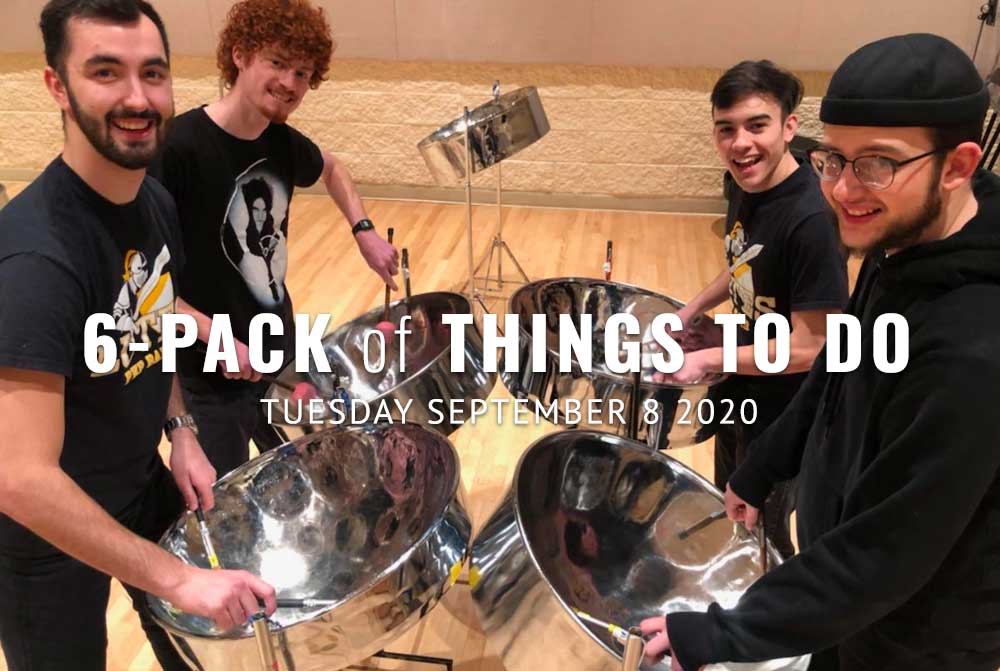 Just when you thought your respiratory system had enough threats a wildfire smoke wind storm shows up. Therefore, Peaks & Pints’ 6-Pack of Things To Do today features events held mostly indoors. Be safe!

CONCERT IN THE PARK: Classical Tuesdays’ annual Concert in the Park will be performed outdoors – but virtually today. The Classical Tuesdays season opens with a performance by Steel Pan, an ensemble representing the music of Trinidad led by Miho Takekawa, a member of the Pacific Lutheran University music faculty. It’s pre-recorded a few days in advance, but still steel drums anytime is a good thing. A conversation will follow between Greg Youtz, PLU music faculty and head of the PLU Trinidad and Tobago Study Abroad program, Takekawa, Classical Tuesday Artistic Director Pamela Ryker and others. Noon to 9 p.m., Classical Tuesdays Facebook

VIRTUAL LECTURE: The Evergreen State College-Tacoma hosts Dr. W. Joye Hardiman, past executive director of The Evergreen State College-Tacoma for week four of the university’s Virtual Lecture Series. Hardiman will share the intention behind the concept of Sankofa, the architecture of Evergreen-Tacoma, and the importance of cultural grounding — an approach to branding that appeals to the cultural/social elements of the target population and nurtures a relationship with audiences by calling up their own meanings, messages, and identities. 10 a.m. to noon, Evergreen Zoom

BEER FLIGHT: When we asked Peaks & Pints Nerd Alert Director Mitchell Lovett to pick a to-go beer flight of video game beers he sprinted to the cooler and started typing the beer names into his Pokédex. The arcades we knew were overrun with burnouts, jeans tucked into their high-tops. Back then; we’d seek out the cigarette-charred console of Elevator Action. Nothing flashy — you played an agent whose goal was to weave through a building grabbing secrets from behind red doors. You dodged, shot or kicked spies and rode the elevator to your getaway car in the basement. The colors were dull, and movement was a bit mechanical. Today, Lovett’s arcades are filled with fifth-level demigods and dorky hoodrats playing virtual anything. Anyhoo, with the arrival of Hoof Hearted Brewing’s Konkey Dog double IPA comes Lovett’s to-go flight, Peaks and Pints Pilot Program: Arcade Beers On The Fly. 11 a.m. to 8 p.m., Peaks & Pints, 3816 N. 26th St., Basecamp Proctor, Tacoma

MUSIC BUSINESS: Presented by Tacoma Public Library’s Digital Media Lab in a Zoom meeting, instructor John Hargis offers weekly forum designed for independent artists: musicians, vocalists and podcasters who are ready to make their voice known in the music and audio entertainment industry. Today, Hargis discusses what it takes to start your own record label — from the basics of setting up and acoustically treating a home studio space to addressing the technical side of studio recording. 6:30-7:45 p.m., Digital Media Lab Zoom

BASEBALL: Dylan Moore hit a solo home run and added a three-run double, Kyle Seager hit a two-run home run and the surging Seattle Mariners beat the Texas Rangers 8-4 yesterday for their first six-game winning streak since July 2019. Tonight, the Mariners take on the San Francisco Giants, a team that on paper looks pretty similar to the Mariners and is a similar position in their rebuild cycle. Mariners RHP Ljay Newsome (0-0. 2.57) starts the opener of a two-game series in San Francisco. 6:45 p.m., Root Sports Northwest