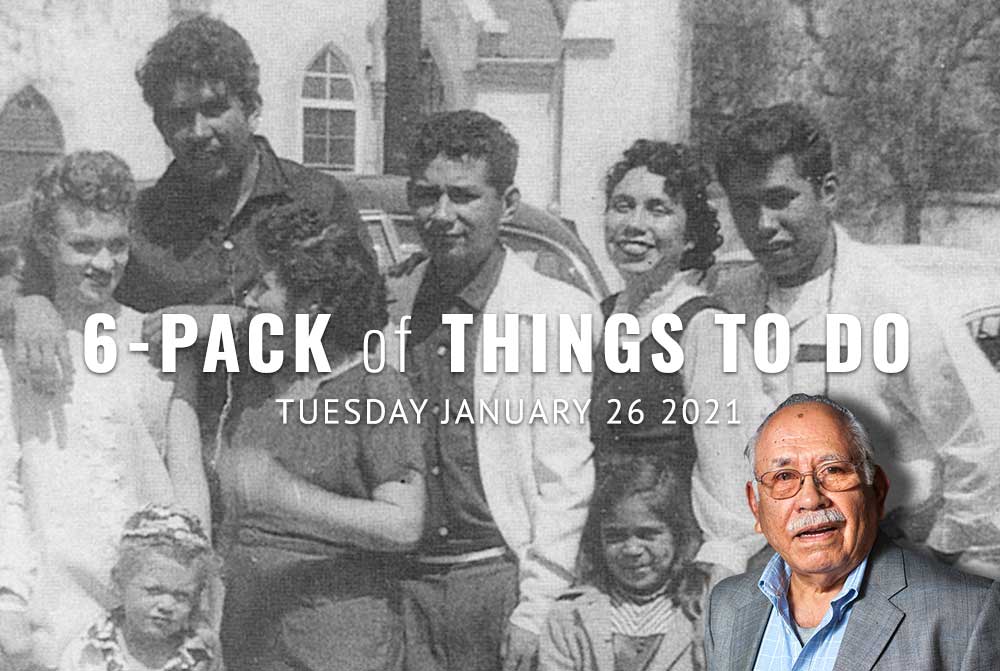 If your quarantine routine is getting stale, see below for our picks for today’s 6-Pack of Things To Do. Cheers!

TACOMA READS: As part of the Tacoma Reads program, Professor Carlos Gil, an emeritus professor of history at the University of Washington, sought to understand immigration by tracing his family’s history from the 1920s to the 1970s. In the process, he discovered the excitement, culture shock, inter-family conflict, and questions of identity that many immigrants face when seeking a better life in another country. Based on his book, “We Became Mexican-American: How Our Immigrant Family Survived to Pursue the American Dream,” Gil will lecture on Mexican immigration by spotlighting his own family’s experience in southern California, including parallels with Washington state. 6:30-7:30 p.m., Tacoma Public Library Zoom Room, free, but registration required here

BEER FLIGHT: Smoked beer may sound like some newfangled trend, but it’s actually a centuries-old tradition that has been making a comeback. In the centuries before temperature controls, grain for brewing was dried over an open flame, imparting a smoky quality to the resulting malt. Over the years, brewers have learned ways to keep that often acrid flavor out of their beers. In Bamberg, Germany, the rauchbier (smoked beer) tradition is still going strong with a handful of breweries that produce different types of smoked beers, including Schlenkerla Rauchbier Märzen. While the beers of Bamberg are almost exclusively lagers, most American smoked beers have a dark ale as their base. Porters are most common, the most iconic of which is Alaskan Brewing Company’s Smoked Porter. Today, we present Peaks and Pints Pilot Program: Smoke On the Fly, a to-go flight of smoked beers, because sometimes smoke is exactly what you want. Just as with scotch, wine and even the humble brisket, a beer with these pungent flavors can become truly transcendent, a hearty food for the soul. 11 a.m. to 8 p.m., 3816 N. 26th St., Basecamp Proctor, Tacoma

BOOK RELEASE: The University of Washington-Tacoma hosts a conversation with Dr. Lisa Hoffman (Urban Studies) and Dr. Mary Hanneman (School of Interdisciplinary Arts and Sciences), as they discuss their new book, Becoming Nisei, in conversation with Dr. Danica Miller (SIAS). Becoming Nisei, based on more than 40 interviews, shares stories of growing up in Japanese American Tacoma before the incarceration. Recording these early 20th century lives counteracts the structural forgetting and erasure of prewar histories in both Tacoma and many other urban settings after World War II. Lisa Hoffman and Mary Hanneman underscore both the agency of Nisei in these processes as well as their negotiations of prevailing social and power relations. 6 p.m., UW-T Zoom Room, free

FILM: What lies behind the masterpieces of Rembrandt, one of the masters of the Dutch golden age? How are these artworks affecting the people owning them? Why are these paintings still so important? These are the main questions documentary director Oeke Hoogendijk’s My Rembrandt tries to answer, and to do so, she chooses to follow a group of art collectors who share a passion, to different extents and for different reasons, for Rembrandt’s oeuvre. Stream it in The Grand Cinema’s Virtual Screening Room with a Breakside Brewery Celebrity Crush Porter from the Peaks & Pints cooler. $12 rental