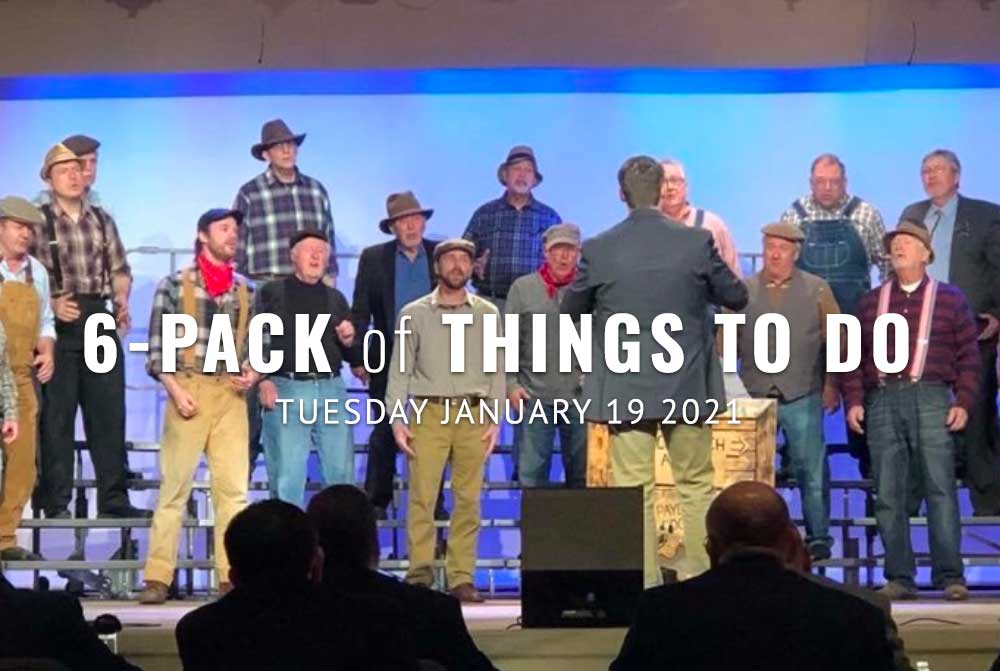 That impossible electric moment when it all comes together in a white-hot pulse of OK sure why the hell not I’ll sing barbershop and drink with wolves and watch a sheep movie and all the other splendors that is today’s 6-Pack of Things To Do.

MUSIC: If you’re thinking that barbershop singing couldn’t be competitive enough or entertaining enough to hold your attention, check out American Harmony. The documentary follows barbershop royalty as they duke it out with the new kids on the block (not those NKOTB) during one of the annual competitions. If you thought watching the spelling bee kids pass out under the pressure of an eight-syllable word made for compelling TV, wait until you see a twenty-something tenor fall short of his high note. After watching the documentary, and you’re thinking barbershop singing is your bag, baby, send off an email to tacomavocalstandard@gmail.com — the gateway to Washington State’s longest running barbershop chorus, Tacoma Vocal Standard. They meet every Tuesday, now virtually, and guests are welcome. 7 p.m., 614-TVS-SING.

BEER FLIGHT: The news had scarcely gotten out that Peaks & Pints has wolves when the phone started ringing at state wildlife offices. “Surely you heard there’s a craft beer bar, bottle shop and restaurant in the Proctor District with wolves in their cooler!” screamed a Rainier drinker over the phone. “That’s ridiculous, and stop calling me Shirley,” quipped the ranger. State wildlife offices haven’t confirmed yet whether a pack of wolves has taken up residence at Peaks & Pints, although the prospect has created a stir in the Proctor District that hasn’t seen a regular wolf population in 200 years. “Frankly, this is ludicrous,” said Peaks & Pints co-owner Pappi Swarner on the phone with the wildlife department. “Yes, we figured, and stop calling me Frank Lee,” replied the female ranger. “We’re going to wait for the science, especially given the political nature of wolves in today’s world,” she continued. People! The wolves are wolf-themed beers. You don’t study them; you drink them! We formed a pack of them for proof. It’s safe to venture inside Peaks & Pints to grab the to-go beer flight: Peaks and Pints Pilot Program: Wolves On the Fly. 11 a.m. to 8 p.m., 3916 N. 26th St., Basecamp Proctor, Tacoma

MARTIN LUTHER KING JR.: All are invited to attend the virtual University of Puget Sound’s 35th Annual Martin Luther King Jr. Celebration tonight. Their program will include messages from various Puget Sound community members and a keynote address featuring multi-genre writer, educator, and interdisciplinary artist, Anastacia-Reneé, who is no stranger to the Sound as she served as the Seattle Civic Poet from 2017-2019. 6:30-8 p.m., UPS Zoom Room, free

TACOMA LIGHT TRAIL: More than 50 artists, arts organizations, businesses and downtown spaces have joined the Tacoma Light Trail to create a free exhibition of light installations including projection mapping, video, illuminated sculpture and sheer blasts of light – with available music, poetry or sound to go along with it. Mad Hat Tea Co. is part of the Trail with lights and crystals combining for an intimate meditative window beckoning to a warm tea café. The act of making tea goes back centuries, a ritual of kindness and calm in an otherwise turbulent world and a chance to slow down and find peace. Sacred gongs from Tibet create a calming sound bath of resonance on the Echoes sound app. 5-9 p.m., through Jan. 24, tacomalittrail.com, Echoes sound app

TOUR: Imagine a time when great acts such as Charlie Chaplin, Jack Benny, Fred Astaire, and Sarah Bernhardt graced the stage of Tacoma’s Grand Pantages Theater. Thanks to Greek immigrant Alexander Pantages and his mistress and business partner, Kate Rockwell (Klondike Kate), downtown Tacoma’s Pantages Theater opened in January 1918 at a cost of $400,000. Gritty City Tours invites you to tour the Pantages and learn its storied history free via their Vimeo page. Photo courtesy of Neko-chan

FILM: The Grand Cinema herds Rams into their Virtual Screening Room. Jeremy Sims’ New Zealand adaptation of the successful Icelandic film Hrútar, Rams tells the story of two estranged brothers on adjoining sheep farms who haven’t spoken to each other in 40 years. When a rare disease threatens their sheep, the brothers must find a way to work together to save their flock, their small town and their family’s legacy. It stars Sam Neill and Michael Caton as the brothers, and features Miranda Richardson, Asher Keddie, Wayne Blair and Leon Ford. $12 rental, photo courtesy of Samuel Goldwyn Films