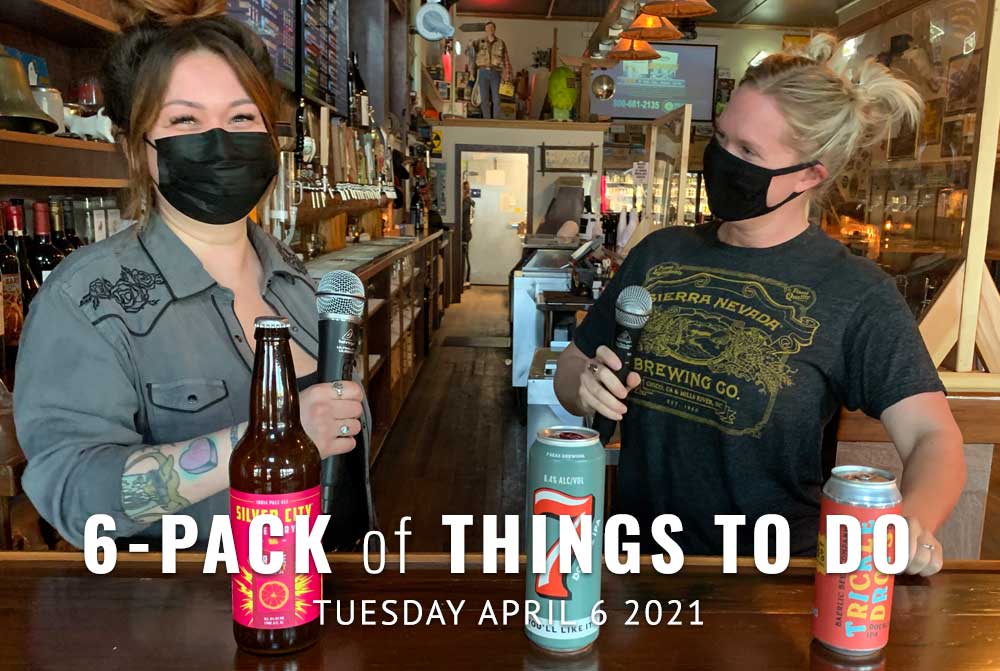 Side effects of today’s 6-Pack of Things To Do: Random bouts of deep sighing/relief coupled to spurts of awkward elation feeding into an urge to hug teachers and botanists and animators and karaoke hosts. Also, brewers.

TOURNAMENT OF BEER: What constitutes a great double IPA? Who brews the best in the Pacific Northwest? Everyone seems to have his or her own favorite, and everyone’s an expert. Throughout the month of February Peaks & Pints polled the public asking what are the top 64 double IPAs brewed in Washington and Oregon. You chimed in. Friday, April 2, we launched the Tournament of Beer: NW Double IPAs, pitting your 64 double IPAs against each other, similar to the NCAA Basketball Tournament, only with way more malt character. Today, eight new double IPAs do battle on the court. Vote here!

BEER FLIGHT: Today, April 6, is the day we all celebrate New Beers Eve. This is a real thing. New Beer’s Eve was the night before the first alcoholic beer became legally available after 13 years of prohibition. From 1920 to 1933, no alcoholic beverages were legal in the United States. Franklin Delano Roosevelt had barely been president for a month when he and a new anti-prohibition majority in Congress known as “The Wets” brought back beer. The Cullen-Harrison Act increased allowable alcohol in beer from 0.5% to 3.2%. Prohibition would be completely reversed later that year with ratification of the 21st amendment to the constitution. The 21st Amendment repealed the 18th Amendment. It took effect at 12:01a.m on April 7, 1933. On the evening of April 6th, anxious Americans lined up at breweries and distilleries to purchase legal beer and alcohol at the stroke of midnight. That night, someone coined the term “New Beer’s Eve,” and a new annual holiday was born. Peaks and Pints offers cheers to FDA and “The Wets” with a to-go flight of new craft beers we call Peaks and Pints Pilot Program: New Beers Eve On The Fly. 11 a.m. to 9 p.m., 3816 N. 26th  St., Basecamp Proctor, Tacoma

PLANTS: The Pacific Northwest is filled with horticultural riches, and spring around here is typically filthy (in a good way) with specialty plant sales. Except when COVID-19 and social distancing disrupt life as we know it. The Metro Parks annual Spring Native Plant Sale is pivoting like a hardy gardener transplanting trees. The Spring Native Plant Sale is online this year where you can visit the online nature shop from April 3-25 to purchase plants, then schedule a pickup day and time for the week of May 3. Here is a list of plants.

WORKSHOP: The Tacoma Tree Foundation hosts Gloria Joy Muhammad for an interactive nature writing workshop. Muhammad is a literary arts teaching artist, educator, and writer based in Puyallup Tribe Territory. As a writer, Gloria is inspired by spirituality, everyday life, nature, music, and cinematography. She is a graduate of Washington State Teaching Artist Training Lab and will host a nature writing workshop. All writers welcome; no experience needed. Noon to 1:30 p.m., register here

KARAOKE: Karaoke fans, get ready to step up to the mic again as Joeseppi’s Italian Ristorante and Bar hosts karaoke every Tuesday night. There’s a catch, though: You’ll have to wear a mask and follow other rules while belting out your favorite tunes. Every singer gets their own individual microphone cover; the microphone is properly cleaned between every individual use; singers perform at a distance of 20 feet from the nearest audience member. Check it out tonight. 7-11 p.m., 2207 N. Pearl St., Tacoma, no cover

FILM: Each year, the Oscars’ shorts categories are an opportunity to spotlight a breadth of imagination and emotion across all filmmaking cultures. The 2021 Oscar Nominated Shorts are streaming in The Grand Cinema’s Virtual Screening Room, including the nominated animation shorts. The animation category is the usual mixed bag of cute and curdle-y. On the former end of the spectrum is Madeline Sharafian’s Burrow — from Pixar’s side-project-friendly SparkShorts program — a fast-paced good-neighbors charmer about a go-getter bunny’s homemaking misadventure in an unexpectedly populated underground. A more starkly comic view of community living is Icelander Gísli Darri Halldórsson’s stop-motion trifle Yes-People, flitting among three pairs of snowbound apartment eccentrics but never really landing any noteworthy laughs. Check them out! $12 rental, photo courtesy of magnetfilm.de