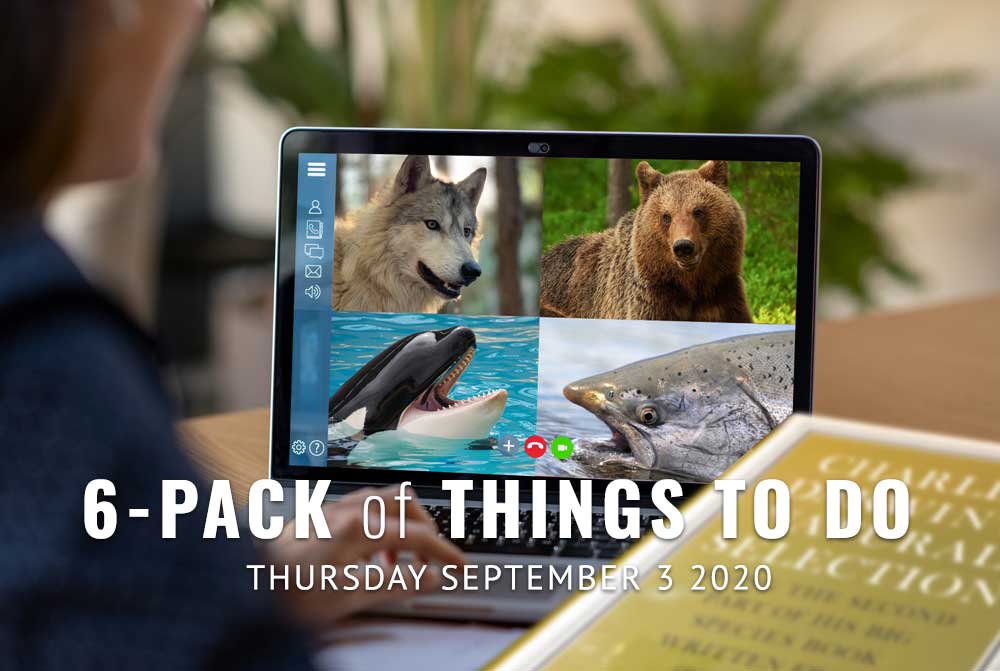 We don’t blame you, really. We wouldn’t want to wear the same dirty left sock every soccer game we played or have to carry around a pocket Buddha just to rub its belly every time we felt we needed a little extra good fortune either. It’s OK, don’t panic. You can get your luck right here. 6-Pack of Things To Do has lots of good luck. Print it out and carry it around with you today. Finding your lucky four-leaf clover on St. Patrick’s Day is still months away. 6-Pack of Things To Do should hold you over till then.

GREEN DRINKS TACOMA: Defenders of Wildlife is a solution-oriented organization dedicated to saving rare animals and plants, conserving habitat and building a broad constituency for protecting wildlife and wild places. The Defenders save the day in the Pacific Northwest, including Tacoma. Tacoma Green Drinks hosts the Defenders on Zoom tonight, discussing what Defenders do to help save salmon, orcas, bears, wolves, birds, and many other endangered wildlife — while drinking beer. Peaks & Pints suggest you enjoy a Little Beast Wolf Camp Hoppy Saison while playing the wildlife-themed games tonight. 6-7:30 p.m., Green Drinks Zoom Room

BEER FLIGHT: Damn, it’s going to get steamy out there today. When it’s this hot, Peaks & Pints only has two solutions … Unfortunately, the proctor Business District prefers us to wear clothing, so number one is out. Number two: drink IPAs with papaya notes until it cools off. If you taste a papaya straight from its thick green-yellow-orange skin, you’ll find a taste that is somewhere between vomit and a rotten cantaloupe. And those slimy looking black seeds that dot the hollow interior taste of potent mustard seed and gassy fermented cabbage. But, papaya in beer is quite lovely. We suggest four papaya-ish IPAs from our cooler in our to-go flight, Peaks and Pints Pilot Program: Papaya On The Fly. 11 a.m. to 8 p.m., Peaks & Pints, 3816 N. 26th St., Basecamp Proctor, Tacoma

MARKET DAY: It’s September, which means the Broadway Farmers Market closes an hour earlier — at 2 p.m. Every Thursday through October, the Broadway Farmers Market continues to offer a vibrant marketplace where local farms, small businesses, and organizations connect directly with the community, in a safe manner. Grab your lunch to-go and pick up some local ingredients for your dinner. 10 a.m. to 2 p.m., 925 Broadway, Tacoma

TOP RUNG RANDALL: The Strata hop wears a cap. In 2009, the hop emerged from an Oregon State experimental field at Corvallis, Oregon with strong disease resistance, a vigorous growing habit, and complex layers of aroma and flavor of passionfruit, grapefruit, strawberry, and dankness. Top Rung Brewing, ran by cape-wearing firefighters and military veterans, will take their Lacey Lager and run it through an infusion tube loaded with fresh Strata hops today. The hop addition will shine in the lager. 3-9 p.m., Top Rung Brewing, 8343 Hogum Bay Lane NE, Lacey

TACOMA COMMUNITY BEER GARDEN: Peaks & Pints hasn’t felt this great about the communal spirit since the group laughs after taster glass drops at the Brew Five Three Beer Festivals. This is community service at its best, and it’s all because y’all have continued to support the most brittle of economic engines — the independently-owned craft beer scene. 7 Seas Brewing and restaurant partner 3uilt, which operates inside the Tacoma brewery’s taproom, continue to host a “community beer garden” in the brewery’s loading dock off 23rd Street Wednesday through Sunday. It seats about 100 socially distanced guests drinking 7 Seas beers, as well as other Tacoma breweries’ craft. 2-8 p.m., 7 Seas Brewing, 2101 S. Jefferson Ave., Tacoma

BAKE BREAD: Bread is one of the oldest human-made foods. In its simplest form, the ingredient list is short; bread is made from a dough of flour and water, and falls under two main categories — leavened (bread with yeast or an agent to make it rise) and unleavened (bread without yeast, like matzo or tortilla). Do you love bread? If you were forced to only eat three things for the rest of your life, would bread would be at the top? You’ve been planning to start sourdough for two years now, but kept putting it off. What better time to start than now, when you don’t leave the house for days at a time? Instead of being inspired by your Instagram feed filled with people making their own loaves at home, bake your own.