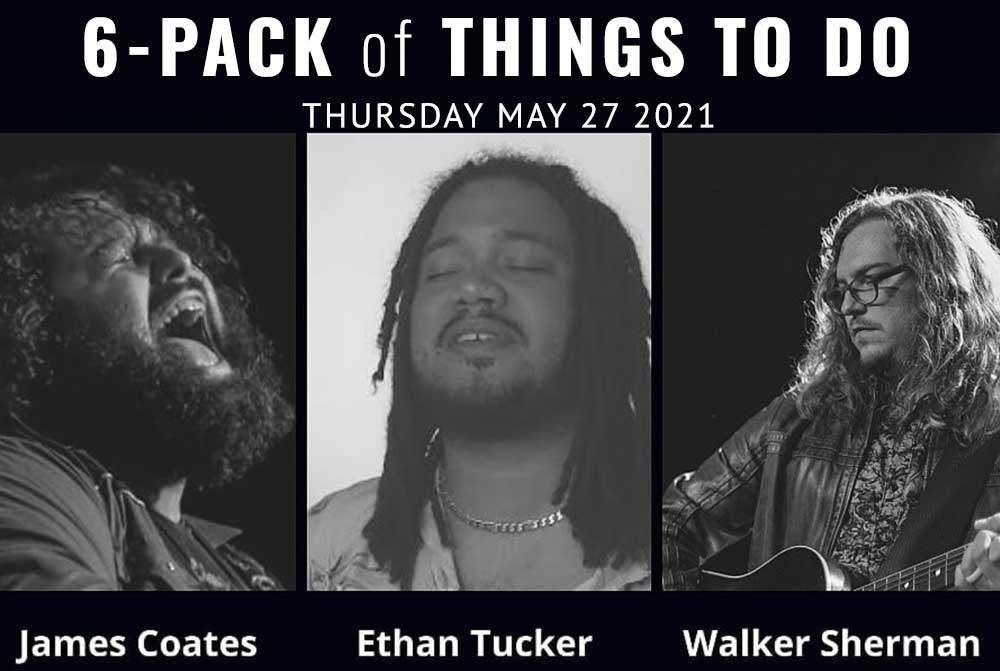 From live music to your own beer tasting comparison, from the Broadway Farmers’ Market to the final Tacoma Noir episode, 6-Pack of Things To Do: Thursday, May 27 2021 has something for everyone today. Cheers!

MUSIC: Every great song has a great loop, and what is a “loop” if not a fancy name for a circle? And when three fantastic singer/songwriters appear at various vertexes of the Spanish Ballroom at what’s being called “Walker Sherman’s Last Thursdays Songwriters in the Round,” they form a triangle of talent. James Coates, Walker Sherman and Ethan Tucker will share songs and explain the sphere of their stories, so expect to analyze complex rotations and experience some laugh lines. This is one equation you won’t mind working out on a Thursday night. So don’t be a square: Go get Round. 7 p.m., McMenamins, 565 Broadway, Tacoma, $55 day of show table of 5

BEER FLIGHT: Do you like West Coast IPAs better than hazy IPAs? Thanks to Chainline Brewing in Kirkland, Washington, your answer can now be more definitive. Our to-go beer flight today — Peaks and Pints Pilot Program: Intent and Purpose On The Fly — compares Chainline’s Intent West Coast IPA with their Purpose Hazy IPA. Both IPAs have the same hop bill but are brewed different. 11 a.m. to 10 p.m., 3816 N. 26th St., Basecamp Proctor, Tacoma

MARKET DAY: Late spring is known for many things — increased pollen, rain, Mariners in the middle of the AL West, and the Broadway Farmers Market. Indeed, it’s a Thursday at the end of May and that list is a thing. But the Broadway Farmers’ Market is blazing purple with lupine, as well as peonies, and other May flowers. Pick up a gorgeous bouquet of locally grown flowers, a tasty lunch, and ingredients for dinner along Broadway street. 10 a.m. to 3 p.m., Ninth and Broadway, Tacoma

FILM: The Grand Cinema screens Dream Horse, the inspiring true story of Dream Alliance an unlikely race horse bred by small town Welsh bartender, Jan Vokes (Toni Collette). With very little money and no experience, Vokes convinces her neighbors to chip in their meager earnings to help raise Dream Alliance in the hopes he can compete with the racing elites. 1:30, 4:15, and 7:30 p.m., 606 S. Fawcett, Tacoma, $5.50-$11

INTERVIEW: Join David Williams, author of the new book Homewaters: A Human and Natural History of Puget Sound, who will be interviewed by Claire Keller-Scholz, Art, Culture, & Heritage Administrator at Metro Parks Tacoma and former Curator at Fort Nisqually Living History Museum. Williams’ research, including at the Museum’s archives and library, sheds new light on Fort Nisqually’s relationship to the Puget Sound. The interview is part of Metro Park’s Fort From Home “Nightcap” series so pair it with Stillwater Artisanal’s Moonmosa blood orange, mango and sea salt sour from the Peaks & Pints cooler. 7-8 p.m., Fort From Home Zoom Room, $10-$50 here

MURDER MYSTERY: The City of Tacoma’s Historic Preservation Office has presented a four-part interactive murder mystery experience based on the birth of noir in Tacoma hosted on Pretty Gritty Tour’s YouTube and Facebook platforms. Over the past three weeks, you have been listing for clues about a fictional murder in 1920s Tacoma. The episodes have focused on a historic structure in Tacoma that has been preserved through the dedicated efforts of the Historic Preservation Office. Tonight’s episode will reveal the killer. The Historic Preservation Office will also explore the history of Dashiell Hammett’s time in Tacoma as a Pinkerton detective recovering from tuberculosis and the events that happened here that inspired his greatest novel, The Maltese Falcon. 6 p.m., Pretty Gritty Tour YouTube or Pretty Gritty Tours Facebook