Peaks and Pints Pilot Program: Intent versus Purpose On The Fly 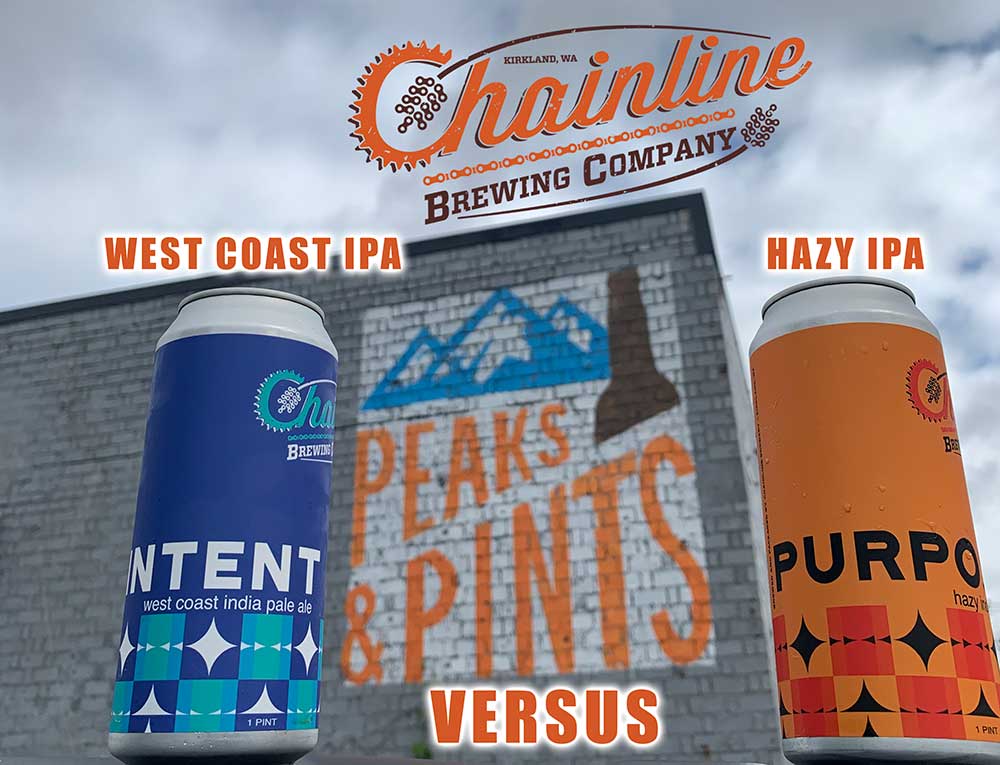 Peaks and Pints Pilot Program: Intent versus Purpose On The Fly

Do you like West Coast IPAs better than hazy IPAs? Thanks to Chainline Brewing in Kirkland, Washington, your answer can now be more definitive. Our to-go beer flight today — Peaks and Pints Pilot Program: Intent and Purpose On The Fly — compares Chainline’s Intent West Coast IPA with their Purpose Hazy IPA. Both IPAs have the same hop bill but are brewed different.

India Pale Ales emerged in the 1700s when British brewers found a market for hoppy beers in India and territories of the British Empire. The American spin on IPAs began to capture widespread appeal in the U.S. by the late 1990s. Those early versions in the craft beer movement often focused on sharp citrus and pine flavors. West Coast IPAs are bold, hop-forward beers born from the increasingly hoppy pale ales of the early ’80s, and then spurred by friendly rivalries among San Diego breweries during the mid-2000s. West Coast IPAs are typically brewed with higher amounts of hops in the boil kettle, which leads to the high bitterness and mid-palate hop flavor in the style such as grapefruit peel, lemon rind, and peppery pine.

Hitting the scene in the early 2010s, the New England style India pale ale came to fame thanks to a Vermont brewery, The Alchemist, with their Heady Topper, an unfiltered double IPA that became a cult favorite. The beer was a success, and other New England breweries followed suit: namely Hill Farmstead Brewery, also in Vermont, along with Trillium Brewing Company and Tree House Brewing Co., both in Massachusetts. Though loaded with hops, they are used primarily for aroma — like an orange grove. The hops are added to the whirlpool after boiling is complete. This “hot steep” time avoids extracting too much bitterness because the hops are not boiled but does extract aroma and flavor. Also, hazy IPAs receive their signature appearance from a combination of proteins and tannins contributed by a combination of higher-protein grains like wheat and oats used in the mash, and high rates of hop additions. The resulting haze complex binds to non-polar hop aroma compounds that would normally not remain in the beer, leading to the unique juicy aroma and lush mouthfeel of the style.

Back to Chainline’s Intent and Purpose, the West Coast IPA and hazy IPA, respectively, are brewed with Citra, Waimea, Idaho 7, and an experimental hop called HBC 630, but using the different procedures previously mentioned. It’s a cool opportunity to taste the difference between a West Coast and hazy.