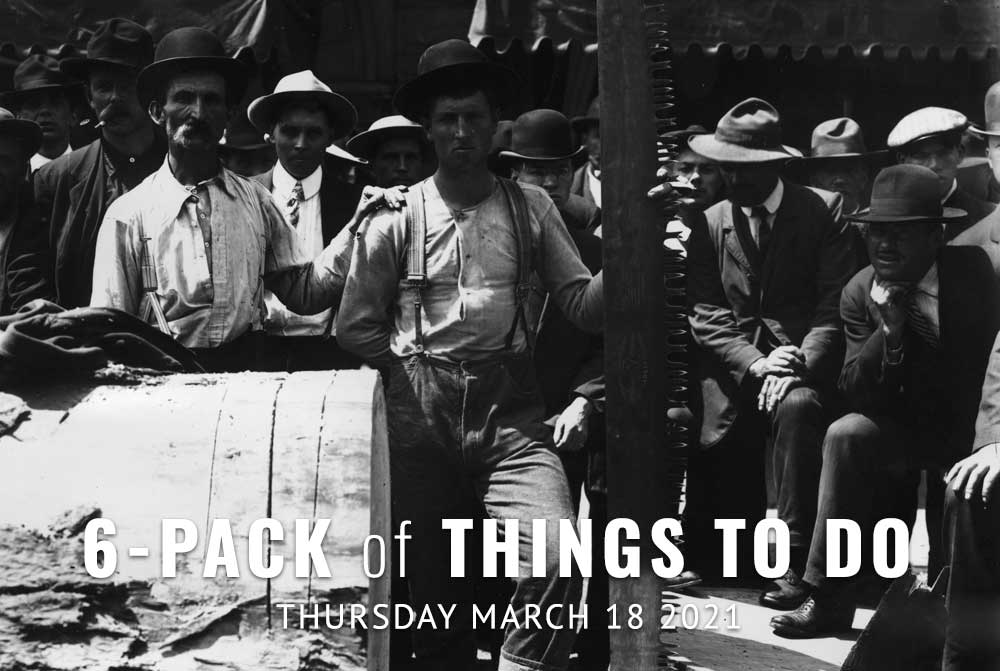 Yes, by now you can make it out of your home, but there’s still plenty to do online. Tacoma Arts Live hosts their online auction VIVID. The Washington State History Museum takes a look at a bad boy Billy Gohl. Museum of Glass pairs James Joyce’s Ulysses with glass, The Grand Cinema discusses stray dogs. Pretty Gritty Tours explores the sunken SS Governor. And, Peaks & Pints suggests you try four double IPA nominated into our Tournament of Beer: NW Double IPAs. Welcome to 6-Pack of Things To Do: Thursday March 18 2021.

HISTORY: The Washington State History Museum hosts “The Bosses’ Clubs: Employers organizing against workers, and the campaigns to defeat Billy Gohl and the Wobblies along the Washington Coast,” a lecture by historian and author Aaron Goings exploring the true-crime world of Billy Gohl (dubbed by newspapers as the Ghoul of Grays Harbor), a labor organizer from Aberdeen arrested for the murder of dozens of sailors and lumber workers. Goings will also delve into the collective, often brutal, union-crushing activity of employers toward working people. 6-7:30 p.m., History Museum Facebook Live, free, photos courtesy of WSU Libraries Digital Collection (Billy Gohl at left, at logbucking contest, ca. 1900)

BEER FLIGHTS: The public nominated 64 Northwest double IPAs for the Tournament of Beer: NW Double IPAs in February. Beginning April 2, through online voting on this website, Washington and Oregon double IPA drinkers will pick daily winners until the best double IPA in the Northwest is crowned April 24. The Tournament bracket hasn’t been released yet, but we have announced many nominated double IPAs pairing them with Northwest hiking trail. Today, we’re highlighting a few of the announced beers in a to-go flight we call Peaks and Pints Pilot Program: Nominated Washington Double IPAs. Take these nominated double IPAs on hikes. And, remember to vote on daily double IPA battles April 2 2021 at tournamentofbeer.com or this website. 11 a.m. to 9 p.m., 3816 N. 26th St., Basecamp Proctor, Tacoma

GREAT READS: The artwork of René Lalique helped to define the Art Deco movement in the early 20th century, a time that produced a staggering proliferation of literary talent that contributes to how we interpret and understand Lalique’s art today. The Museum of Glass has selected 10 iconic books — the top literary works of the 1920s — and worked with Tacoma-based artists to bring the words to life amid Lalique’s great works. Offered in conjunction with the exhibition René Lalique: Art Deco Gems from the Steven and Roslyn Shulman Collection, MOG will release a new Great Reads video every third Thursday, which is today: Emilie Rommel Shimkus reads James Joyce Ulysses. 9 a.m., MOG YouTube Channel

AUCTION: Tacoma Arts Live hosts VIVID, a fundraiser for their Arts Access & Education programs. Each year, they serve more than 300,000 patrons and provide more than $100,000 in free tickets to empower access. Their education programs reach across four counties and many school districts serving nearly 50,000 annually, plus they offer more than $35,000 in scholarship and transportation support. The VIVID auction helps make all that awesomeness possible. The auction closes at 8 p.m. Saturday, March 20. Have a VIVID Day.

DISCUSSION: Haven you seen Elizabeth Lo’s documentary Stray in The Grand Cinema’s Virtual Screening Room? The film follows the everyday life for a street dog named Zeytin, a weathered mixed breed who ekes out an itinerant living – along with thousands of others just like her – in the hustle and bustle of metropolitan Istanbul. Istanbul is home to 15 million people and some 130,000 stray dogs. For more than a century, it struggled to get a handle on its stray dog problem. It still struggles. Philip Cowan, executive director of The Grand and David Dinnell, director of the Tacoma Film Festival, which screened the film in 2020, will lead a virtual discussion on Stray tonight. Interested participants should email info@grandcinema.com and a link to the event will be provided. The film discussion does not include watching the film; patrons should complete the viewing of the film prior to the discussion start time (though not required). 7-7:45 p.m., $12 film rental, photo courtesy of Magnolia Pictures

LECTURE: The SS Governor was a 417-foot-long passenger liner built in 1907 in Camden, New Jersey. In the early morning of Friday April 1, 1921, she collided with the SS West Hartland, departing Port Townsend for India. The West Hartland tore a 10-foot gash in the starboard hull of the Governor, and 20 minutes later she sank, taking eight lives with her. Today, the Governor rests at a depth of 240 feet in Admiralty Inlet about one mile from Port Townsend. Join the Foss Waterway Seaport and Pretty Gritty Tours as they explore the SS Governor’s history with master diver Robert Mester. 8 p.m., Pretty Gritty YouTube, free, photo courtesy of Iwanafish