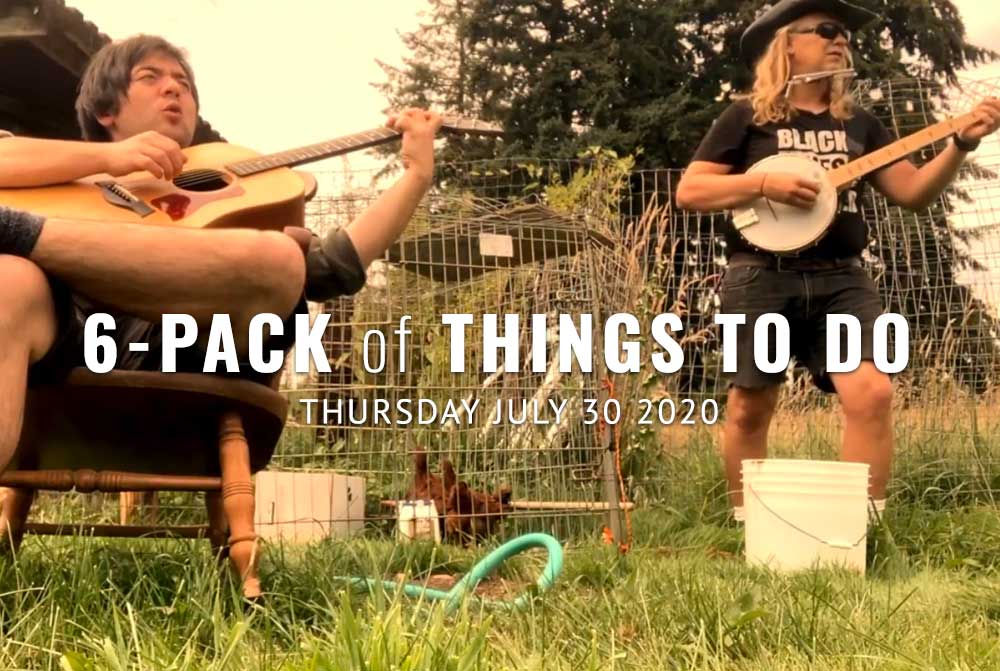 6-Pack of Things To Do: Thursday July 30

This year, the best kind of summer experience is an unstructured one, whether it’s blocking out a day for a hike at Mt. Rainier, shaking your head on a giant rock along the Ruston Way waterfront or sitting down with a good book. Peaks and Pints has managed to discover six other things to do today in our 6-Pack of Things To Do: Thursday July 30.

MUSIC: Forest Beutel and Kevin Shintaku have been entertaining the South Sound, frankly the whole world, since the pandemic hit. The longtime bandmates — Beutel plays banjo and harmonica in the Barleywine Revue and The Rusty Cleavers and Shintaku adds mandolin and guitar in both bands — have collaborated on a live streaming concert, More Ducks More Fun. They’ve entertained with originals and covers, from Bill Monroe to Bill Withers and Tacey Chapman to Janis Joplin to Tom Waits. Tonight, Episode 16, will be their last for the summer. They enjoy tubing down rivers way too much to let the summer go without tube chaffs and floating cooler tip-overs. Tune into their More Ducks More Fun Youtube channel tonight and enjoy. 6 p.m., Youtube

BEER FLIGHT: As comedian Steven Wright once said, “24 hours in a day … 24 beers in a case … coincidence?” Peaks & Pints thinks not. There are also seven days in a week and seven summer weather craft beer styles. Coincidence? Peaks & Pints thinks not. Our current hot weather streaks calls for a craft beer with impactful flavor and a light, refreshing finish. While there’s a plethora of brew styles out there, some are a little more enjoyable when the sun is beating down relentlessly. Today’s to-go beer flight, Peaks and Pints Pilot Program: Hot Weather Beer On the Fly, includes seven styles to enjoy while standing in front of the refrigerator with the door wide open. 11 a.m. to 6 p.m., Peaks & Pints, 3816 N. 26th St., Proctor District, Tacoma

DISCUSSION: Our world is growing more complicated by the hour, and figuring out how to talk with the young people in our lives about issues like climate change can cause even more stress. Enter Harriet Shugarman, “Climate Mama,” and author of How to Talk to Your Kids About Climate Change. The Climate Reality Project will get that conversation started and turn climate angst into climate action with a free Zoom lecture by Shugarman, “About Climate Change: Turning Angst Into Action,” followed by a Q&A. 6 p.m., registration is required

DISCUSSION: During the economic depression of the 1930s, U.S. government art projects created a wealth of public art and supported artists across the country, as explored in Tacoma Art Museum‘s current exhibition, Forgotten Stories: Northwest Public Art of the 1930s. Spaceworks Tacoma has been helping connect artists to places with their Rapid Mural Response Program. The two organizations will host the Zoom discussion “Public Art in Tacoma: Rapid Murals” featuring artists and organizers who have been brightening up Tacoma during the pandemic, including Mindy Barker who artwork is attached to this paragraph. 6-7 p.m., click here to register for the free event

MOVIE: When a migrant mother is separated from her child, when a transgender soldier is at risk of losing his career, when reproductive and basic voting rights are under attack, the unsung heroes of the American Civil Liberties Union take legal action to protect our freedoms. Gripping and topical, the documentary The Fight tags along with four ACLU attorneys as they tackle a few of the thousands of lawsuits brought against the Trump administration. Directed intensely by Elyse Steinberg, Josh Kriegman and Eli Despres, it’s an inspiring, emotional look at the lawyers of the ACLU, whose work is in demand now more than ever. Stream it from The Grand Cinema’s Virtual Screening Room with the Wingman Brewers Black Is Beautiful Imperial Coffee Stout you bought from Peaks and Pints. $12 movie

MUSIC: Drop by Peaks & Pints and buy a six-pack of Wander Brewing Right Here Right Now IPA, stream the movie Grease, and put on Pink Floyd’s Wish You Were Here. Mute the movie and start the album just as Paramount Mountain appears; proceed to drink and enjoy the spoils of a true film-album synchronization — or at least one that’s far better than yesterday’s tired “Dark Side of the Rainbow” screenings. Don’t try to align Areosmith’s Toys in the Attic with the original Toy Story flick; it doesn’t work. Stick with Grease and Wish You Were Here and Right Hear Right Now IPA. Just for kicks, drink the beer every time someone touches their own or someone else’s hair.