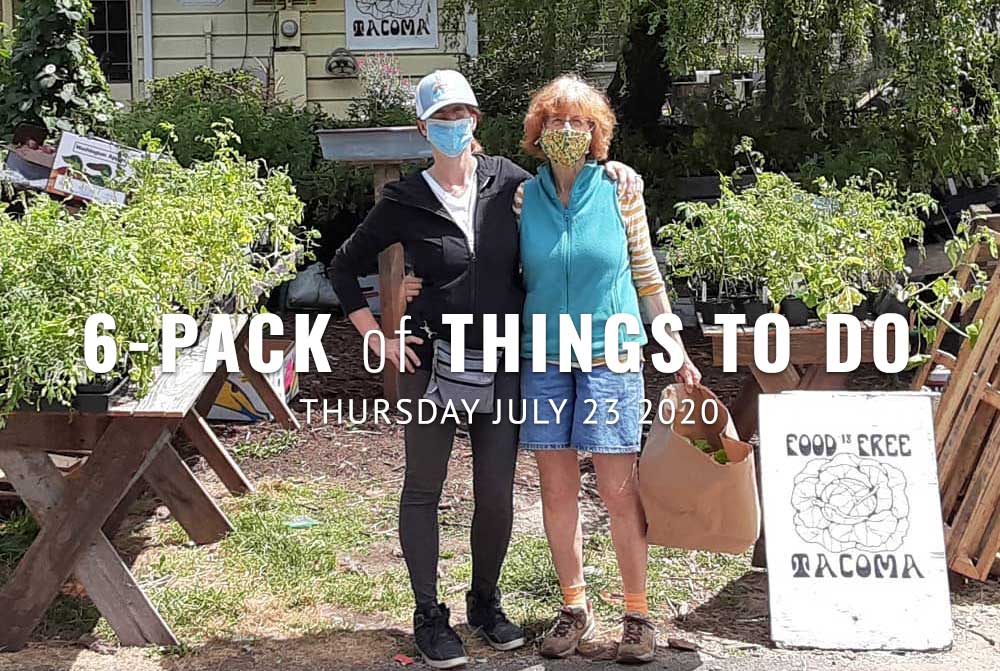 Given that we’re living through a pandemic worthy of the scariest sci-fi film, you probably want to continue staying indoors. Today’s 6-Pack of Things To Do leans heavy on virtual fun. But maybe you’re feeling trapped inside, or bemoaning the loss of summer vacation, or losing your mind because your kids won’t stop whining about wanting to do something. If so, the Broadway Farmers’ Market is a thing. Cheers!

PODCAST: At food banks and distribution programs across Pierce County there has been a significant increase of people in need, as unemployment claims have skyrocketed around the state and businesses have shuttered. At the same time, these feeding organizations have seen a decrease in food donations from grocery stores and other partners, as well as a delay in food deliveries. Tacoma podcasters Crossing Division examines a solution — Food is Free Project Tacoma. Crossing Division host Evelyn Lopez talks with David Thompson, director of Food is Free Project Tacoma, about urban gardening, food sharing and community building. David shares that while the future may be uncertain, having the ability and commitment to growing your own food is important and can help your neighbors in need. Crossing Division is in the Channel 253 podcast network. Listen to the full episode on Apple Podcasts, Spotify, Stitcher, or wherever you get your podcasts, and pair it with an Everybody’s Brewing’s Fertile Ground NW IPA in the Peaks & Pints cooler.

BEER FLIGHT: There are many metrics by which we can measure the brewing explosion that has taken place in the Eastern Washington over the past half-decade. We can talk about the number of new breweries, or the emergence of growler stations and beer bars. If we want to get really technical, we can tally the amount of barrels brewed and even track how many of those are traveling to other markets, serving as liquid evangelists for a craft beer scene that’s turning heads in the Northwest. But perhaps an easier, more visible metric would be to taste the delicious new IPAs coming out of the other side of the Cascades. Stop by Peaks & Pints today for a to-go flight of new Eastern Washington IPAs. 11 a.m. to 8 p.m., 3816 N. 26th St., Proctor District, Tacoma

FARMERS MARKET: The silver lining during the pandemic is that more folks are waking up to the inadequacies of the industrial food system, and that they’re responding by buying locally. They’re no better place to buy local than a farmers’ market. Every Thursday the Broadway Farmers Market offers a vibrant marketplace where local farms, small businesses, and organizations connect directly with the community, in a safe manner. Good news: Gateway to India is back at the Broadway Farmers Market with curries, Indian tacos, naan and more. 10 a.m. to 3 p.m., 925 Broadway, Tacoma

VIRTUAL AUCTION: The last few months, we’ve seen how our online world has allowed us to circumvent barriers to communication and come together virtually for collective action. For the Mountaineers, the carabiner slapping of an in-person annual fundraising gala is gone, but the outdoor savvy organization has used their tech savvy to give us the tools to act from our couches. Tonight, the outdoor advocacy organization will hold their biggest fundraiser of the year live on YouTube, where you’ll be able to bid on live auction items, hear keynote remarks, and be the first to hear a special announcement at the end while drinking an Abomination Brewing’s Fruit of the Woods Pie sour ale with blackberries, raspberries, apples, strawberries, rhubarb, lemon and vanilla beans. 6:30-8 p.m., mountaineers.org

MUSIC: It’s Thursday night. You could go to some bar and fight through a socially-distanced of martini-swigging, tie-wearing corporate types, or you could let the bohemian come out in you and spend happy hour streaming the Casey MacGill Cocktail Hour live from the fabled Ridgewood Room, high atop the hills of Tacoma. Music veteran MacGill performs music that swings. Nat “King” Cole Trio meets the Mills Brothers. Fats Waller meets Fats Domino. Slim Galliard meets Fred Astaire. It is American music of many decades and no decade in particular, all happening at the same time, woven into a seamless, beautiful whole on YouTube and Facebook. Pair the show with E9 Brewing’s Transmissions On Air IPA. 5 p.m.​

MUSIC: Tacoma grunge heavy rock band Halcion Halo has been standing strong for a number of years. Led by guitarist/singer Jenson Charnell, the band members and music continues to evolve while styles all around jump from one trend to another. Drummer Ira Garrett and bassist Eric Morlen join Charnell in a virtual concert of heavy deep riffs, monstrous drums, slathering of bass and commanding vocals tonight on Facebook. Pair the show with Standard Brewing’s War Pig milk stout from the Peaks & Pints cooler. 8 p.m.