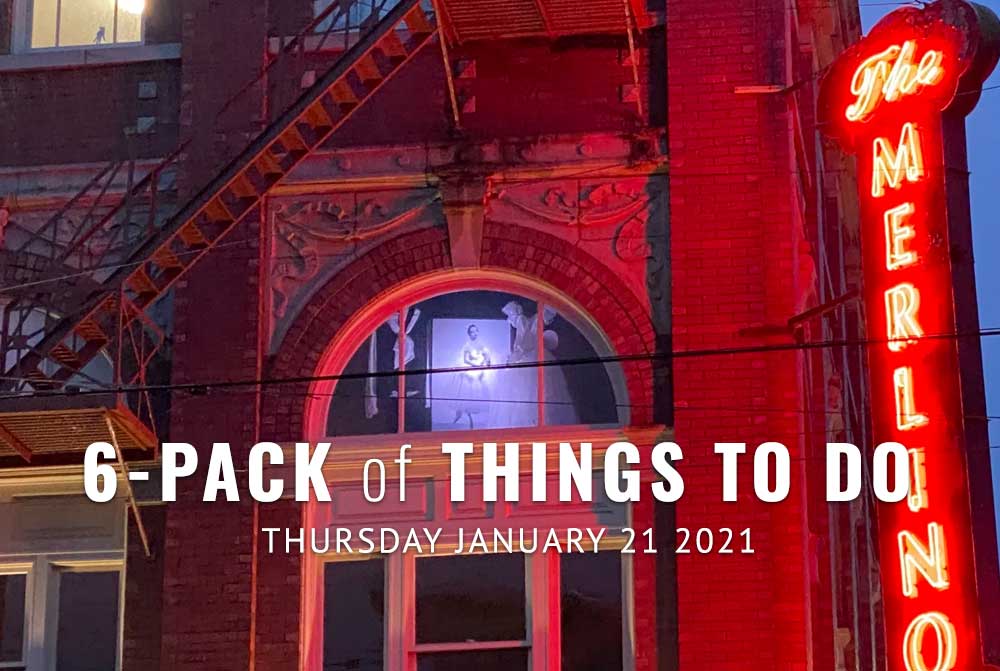 Mask up, mourn our incalculable losses, remain vigilant and invite kindness at every possible turn. On we go with life and today’s 6-Pack of Things To Do. …

TACOMA LIGHT TRAIL: In the balcony of Tacoma City Ballet in the Merlino Art Center are the arches of seven Palladian windows. The tops of each window are illuminated like a shadow-box, each themed with a different ballet to celebrate the dance. On the Echoes app, “The Book of Goddesses” by Robert Paterson is performed by members of Symphony Tacoma painting a picture of the goddess Sarasvati. It’s a part of the popular Tacoma Light Trail — a free exhibition of light installations — with available music, poetry or sound to pair via the Echoes sound app. 5-9 p.m., through Jan. 24, Merlino Art Center, 508 Fawcett Ave., Tacoma, tacomalittrail.com, Echoes sound app

BEER FLIGHT: Bend Brewing Co. was established in 1995 and is the second oldest brew pub in Bend. Located in historic downtown Bend, right on Mirror Pond, the ownership changed close to five years ago when Packy and Leslie Deenihan purchased the beloved brewery from Wendy Day. Since its purchase the new owners have added a massive outdoor space, added a northeast Bend production facility and hired former Three Creeks Brewing head brewer, Zach Beckwith. Prior to joining Three Creeks, Beckwith brewed at the former New Old Lompoc on Northwest 23rd Avenue in Portland. Beckwith brews some pretty avant-garde beers, as well as having one of Oregon’s first successful sour-beer brewing programs. One of the best decisions the Deenihans made is opening up distribution into Washington state. Bend Brewing cans have arrived at Peaks & Pints and a to-go beer flight is in order. Stop by for Peaks and Pints Pilot Program: Bend Brewing On The Fly. 11 a.m. to 8 p.m., 3816 N. 26th St., Basecamp Proctor, Tacoma

LECTURE: The University of Puget Sound hosts another Thompson Hall Science and Math Seminar, this time the second part of their State of the Climate Series where local professors and scientists provide an update on global climate indicators. Today, Prof. Ellen Moore of the University of Washington-Tacoma and Chris James, a local, well-known Regulatory Assistance Project and Air Quality consultant will lecture and take questions. Pair the lecture with Revision Brewing‘s Cloud Cuddles IPA from the Peaks & Pints cooler. 4-5 p.m., Google Meet, free

SCIENCE DOME: The Pierce College Science Dome is a 58-seat digital planetarium that is the only one of its kind in the South Puget Sound region. This immersive and interactive facility allows visitors to view the night sky from anywhere in the known universe on a cloudy day, be immersed in an alien environment with breathtaking full-dome images, explore the Egyptian pyramids and so much more. Tonight, the Pierce fires up the dome for a live talk and real-time telescope observations captured with the Slooh telescope network. Pair the experience with Mother Earth Brewing‘s Cosmic Pyrokinesis Hazy IPA from the Peaks & Pints cooler. 6-6:40 p.m., Pierce College Science Dome Zoom, free, register here

FILM: The South Sound Surfrider folks hipped us to this film, She Is The Ocean, presented by the Surfrider Washington’s Cascadia Film Series. The film follows nine extraordinary women, scattered across all corners of the globe. But they are united by the same sea, and their love for these waters is matched only by their dedication to preserve and protect them. The screening is followed by a live Q&A with local ocean heroes Kelly Potts, Susan Simmons, and Marina May. Pair the film with Rainy Daze Brewing‘s Goat Boater IPA from the Peaks & Pints cooler. 6 p.m., Washington Surfrider Zoom,  free, register here

THEATER: You’re traveling through another dimension — a dimension not only of sight and sound but of mind. A journey into a wondrous land whose boundaries are that of imagination. That’s a signpost up ahead: your next stop: Spacies: Kill Or Be Killed! The Tacoma Little Theatre Spacies serial space theater follows Commander Rash Blasterbelt and Ensign Jock Junior, members of the Intergalactic Space Guardians, as they travel through the cosmos to defend the innocent. Tonight, YOU get to choose the fate of our heroes. Get ready for a new interstellar adventure in which you make real-time decisions. Pair this space theater episode with Level Beer’s All I Do Is Win IPA from the Peaks & Pints cooler. 8 p.m., Tacoma Little Theatre Zoom, free