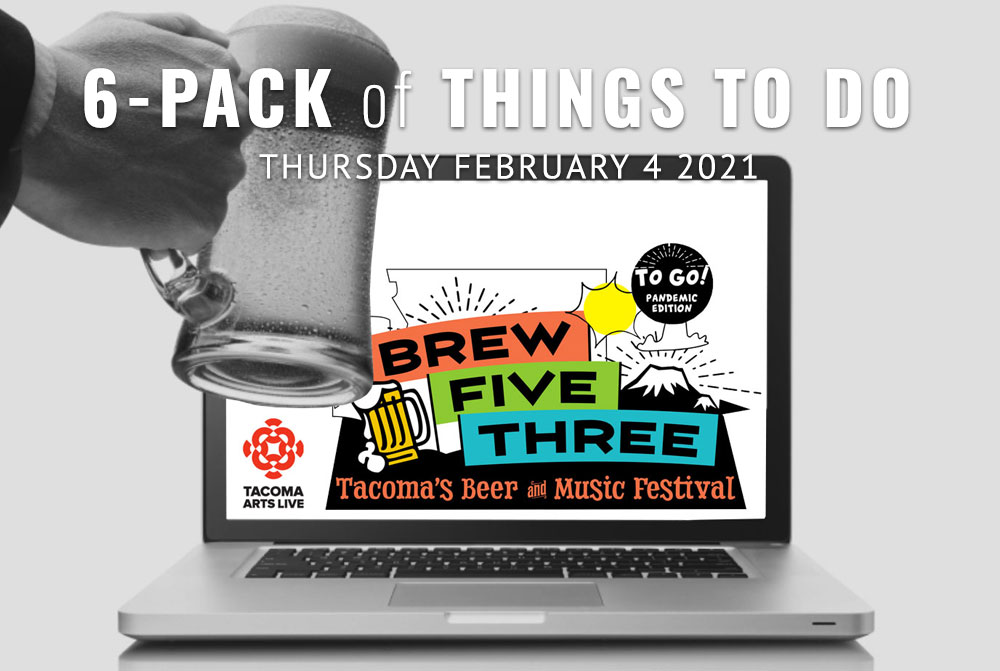 A centaur blares a horn on top of a mountain. The sun cuts through gloomy clouds. The beat kicks in. Cherubic unicorns and pegasi awaken from a long slumber, and a rainbow-trailing fairy flies overhead. Welcome to Peaks & Pints’ 6-Pack of Things To Do: Thursday February 4 2021.

BEER FESTIVAL: Today marks the last day you can order your Brew Five Three To Go virtual tasting kits. Tacoma Arts Live hosts three different Zoom-style virtual tasting events (Feb. 13-14), one for each of the three themed kits, highlighting what you’re drinking, as well as brewers’ chat and Q&A sessions. Each kit features a variety of different cans and bottles, a pint glass, and fun swag from participating brewers, cideries and local bottle shops. Plus, don’t forget the music —every purchase will have access to a special brewer and partner curated Spotify list. Order your kits here. Pick up date is Feb. 13, 2021 at LeMay – America’s Car Museum.

BEER FLIGHTS: Just when Peaks & Pints thought we’d have to cancel our annual February Stout Month celebration, Gov. Jay “Stout Is Life” Inslee allowed us to re-open for in-house drinking and dining this past Monday. February 2021 Stout In and Out is on! The Tacoma Proctor District craft beer lodge will tap five stouts on our Western cedar tap log through February for in-house enjoyment and Campfire Crowlers to go. Enjoy stouts, milk stouts, imperial stouts, pastry stouts, nitro stouts and other variations from your barstool or from your couch. Today, we add a to-go flight of stouts — a flight we call Peaks and Pints Pilot Program: Stout Month On The Fly. 11 a.m. to 6 p.m., 3816 N. 26th St., Basecamp Proctor, Tacoma

FILM: The Peace Bus TV Show will park for a free showing on The Patio at Alma Mater.    Through music and zaniness, Tacoman Kwabi Amoah-Forson and friends educate children on the subjects of homelessness, poverty, incarceration, hunger, racism and how they can help with the environment. The all-ages outdoor screening of The Peace Bus pilot episode will feature Sesame Street-like puppets and characters. 3:30 p.m., Alma Mater, 1322 Fawcett Ave., Tacoma, free

SCIENCE DOME: While most of the brightest planets are too close to the Sun, Mars will be front and center at the Pierce College Science Dome, a 58-seat digital planetarium that is the only one of its kind in the South Puget Sound region. This immersive and interactive facility allows visitors to view the night sky from anywhere in the known universe on a cloudy day, be immersed in an alien environment with breathtaking full-dome images, explore the Egyptian pyramids and so much more. Tonight, Pierce fires up the Dome for a look at the February sky and real-time telescope observations captured with the Slooh telescope network. 6-6:40 p.m., Pierce College Science Dome Zoom, free, register here

COMEDY: Washington D.C. comedian/actor Earthquake, born Nathaniel Stroman, has carved quite a unique audience. He’s captured the attention of Howard Stern and Bill Maher. He’s maintained his moniker as the “comedian’s favorite comedian.” He shakes up audiences with his high-brow common sense rhetoric as one of the most sought-after comedians on the national entertainment circuit. Tonight, he plays the Tacoma Comedy Club. The club open for shows. And it’s going to shake tonight. 7:30 p.m., $25-$35 here

THEATER: “Far out in the uncharted backwaters of the unfashionable end of the Western Spiral arm of the Galaxy lies a small unregarded yellow sun. Orbiting this at a distance of roughly ninety-eight million miles is an utterly insignificant little blue-green planet whose ape-descended life forms watch Tacoma Little Theatre’s Spacies serial space theater every Thursday night. Tonight, Commander Rash Blasterbelt and Ensign Jock Junior, members of the Intergalactic Space Guardians, are, once again, traveling through the cosmos to defend the innocent while you watch on the Zoom platform. Pair this space theater episode with Modern Times Mythic Worlds hazy Galaxy hopped IPA from the Peaks & Pints cooler. 8 p.m., Tacoma Little Theatre Zoom, free