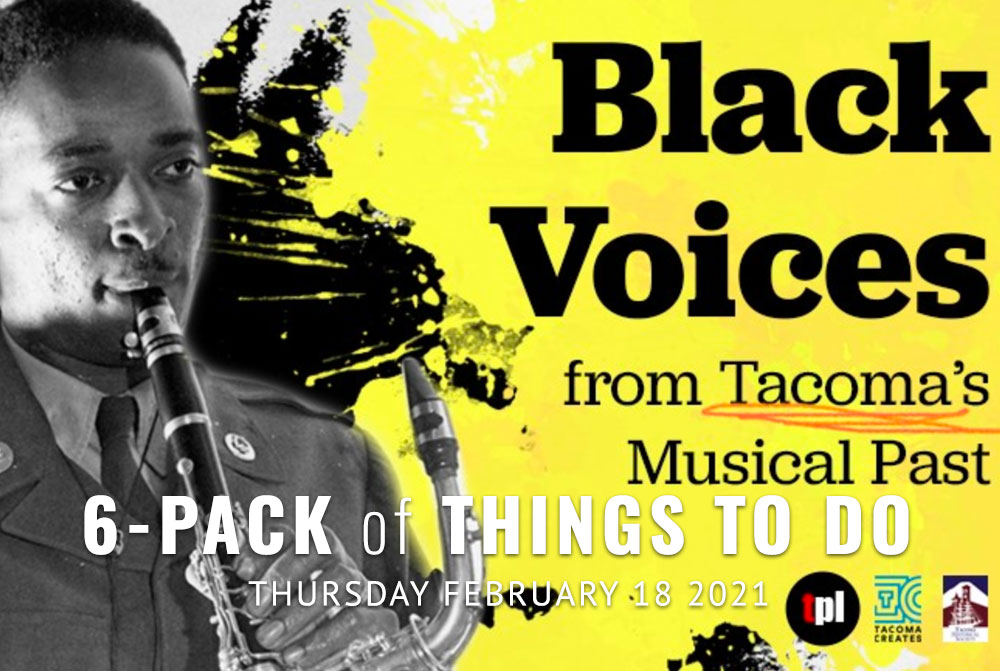 Some people are morning people. They like to get out, buy their beer and get home before traffic gets crazy and maskless customers start yelling “You’re drinking the Kool-Aid!” at bartenders and customers. For everyone else, today’s 6-Pack of Things To Do leans more toward late afternoon and night haps. Cheers!

LECTURE: The Tacoma Public Library continues its Black History Month focus with “Black Voices from Tacoma’s Musical Past,” in partnership with the Tacoma Historical Society, and support from Tacoma Creates. In this presentation, Tacoma music historian Kim Davenport will share stories of black musicians from Tacoma’s past who left an important legacy in our city. Some made Tacoma home while others were merely guests for a time, but all added to the artistic vitality of our community while confronting the realities of discrimination. The presentation will include historic photographs, as well as both historic and new audio. 6-7 p.m., Tacoma Public Library Zoom Room, free, but registration required

BEER FLIGHT: The Belgian quadrupel is the strongest in a series of Trappist styles, beginning with the single (better known as an abbey), the dubbel (double) and the tripel (triple). Quads are the strongest of the Belgian beers, often over 10% ABV. The monks seem to have stopped at four. They probably passed out. Quad is a dark beer that ranges from black to deep red or garnet, with a rich bold maltiness that combines with yeasty hints of raisin, dates, figs, grapes and plums. The quad is not hoppy. It’s known for alcoholic warmth and a complex sweetness, with wine and liquor-like characteristics. Today, Peaks & Pints presents a to-go flight of quads — both Belgian and domestic — a flight we call Peaks and Pints Pilot Program: Quadrupel On The Fly. Confession: We posted a quad flight a month ago, but the arrival of Cascade’s Contemporary Fashion forced us to revisit the style again. It’s that delicious. 11 a.m. to 9 p.m., 3816 N. 26th St., Basecamp Proctor, Tacoma

BEER CONTEST: In April 2021, Peaks and Pints will host the Tournament of Beer: NW Double IPAs — our fifth beer tournament. Through online voting, Washington and Oregon double IPA drinkers will pick daily winners until the best double IPA in the Northwest is crowned. It’s just like March Madness, only with way more fermentable sugars. First, we need you to help select the 64 Washington and Oregon DIPAs that should be included in the tournament. Click here and vote for your top three Washington and Oregon double IPAs before midnight Sunday, Feb. 21. We’ll randomly select a ballot to win a $25 Peaks and Pints gift card. And look for the first round of Tournament of Beer: NW Double IPAs voting April 2 at tournamentofbeer.com.

VIRTUAL OPENING: Hey Tacoma Art Museum members! Join the TAM staff for a virtual conversation about their online exhibition, Painting Deconstructed.  Indulge in some wine and cheese as you connect with art enthusiasts of Tacoma and dive deep into guided conversations about. Painting Deconstructed: Selections from the Northwest Collection, which takes a deep dive into the art of painting by focusing on the core components that come together to create a finished image. 5:30-7 p.m., Virtual TAM, registration required