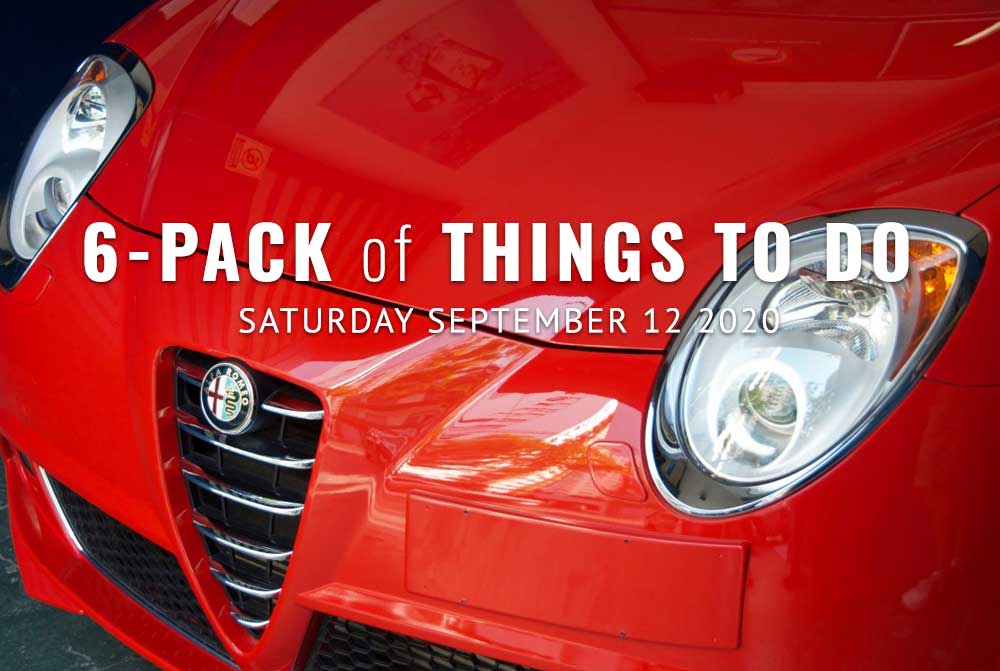 It’s the end of the world as we know it, and the sky looks fine. Very eerie, and beautiful — in an Edgar Allan Poe kind of way — the smoke-clogged air hovering over the South Sound can make people more susceptible to respiratory infections. Therefore, today’s 6-Pack of Things To Do is all about spending most of your time indoors. Be safe!

WHEELS & HEELS GALA: It’s not a big deal if your heels colors don’t match as tonight’s American’s Automotive Trust gala at LeMay – America’s Car Museum is online. The “Mechanics in Motion” Virtual Gala & Live Auction will be live streamed. You will have the ability to interact with the auctioneer and host, David Silverman, bid for live and silent auction items against other participants, and be introduced to America’s Automotive Trust honorees. You’ll also learn more about the programs our collaborating nonproﬁts serve and the lives the Trust impacts. Grab a Jules Lassalle Champagne from the Peaks & Pints cooler and start bidding! 5-7 p.m., register for free here.

CIDER FLIGHT: Northwest Cider Association’s 10th Annual Washington Cider Week continues at Peaks & Pints with day three of to-go Washington cider flights from out taps and cooler. Today, we feature Whitewood Cider Company from Olympia. In 2012, when Dave White met Heather Ringwood in the cider naming room the two business partners created Whitewood, the South Sound’s first cidery. White has family roots in the state’s apple capital, Wenatchee — his grandfather worked in the apple industry — so he doesn’t mess around much with other fruits. In fact, White became a founding member of the Northwest Cider Association. Drop by Peaks and grab our Campfire Crowlers and bottles of Whitewood in a to-go flight we call Peaks and Pints 2020 Washington Cider Week Flight: Whitewood. 11 a.m. to 8 p.m., Peaks & Pints, 3816 N. 26th St., Basecamp Proctor, Tacoma

TAM AT HOME: Tacoma Art Museum’s collection of more than 5,000 works emphasizes the art and artists of the Northwest and broader western region. TAM also has an European Art Collection consists of around 300 works in all media created by artists who are citizens of Western and Eastern European countries. You can sip a Modern Times Occhio Mallochio Italian Pilsner from Peaks & Pints cooler and peruse TAM’s European Art Collection on your screens here. Photo courtesy of tacomaartmuseum.org

CITY OF DESTINY AWARDS: Mayor Victoria Woodards and the City Council will recognize Tacoma’s top volunteers and service providers during this year’s 34th Annual City of Destiny Awards. Due to COVID-19 restrictions, they will present a virtual format of the awards ceremony that will be premiered on multiple platforms. The new format will highlight all of this year’s awardees and feature local performers. The event will premiere on TV Tacoma and streamed live on Facebook. 6 p.m.

MOVIE: The Grand Cinema added another film to their Virtual Screening Room. Blackbird is thought-provoking family drama about learning to live in the moment when painful loss looms. Starring Susan Sarandon, Kate Winslet, and Sam Neill, the film grapples with the contrasting needs of the dying and the soon-to-be-bereaved with humor, curiosity, and a tremendous sense of humanity. $12 movie

BASEBALL: The Seattle Mariners will play the Arizona Diamondbacks as the Seattle club is in fire-free Arizona. The D-backs clearly carried their momentum into last night’s home match against the Mariners, taking the series opener 4-3 for the team’s second straight victory. The Seattle Mariners have also cooled off with three straight losses and an offense that’s gone quiet. But, there’s a health warning and a pandemic outside so what else are you going to do? Grab a Belching Beaver High Expectations Hazy IPA from the Peaks & Pints cooler and make the best of it. 5:10 p.m. Root Sports Northwest