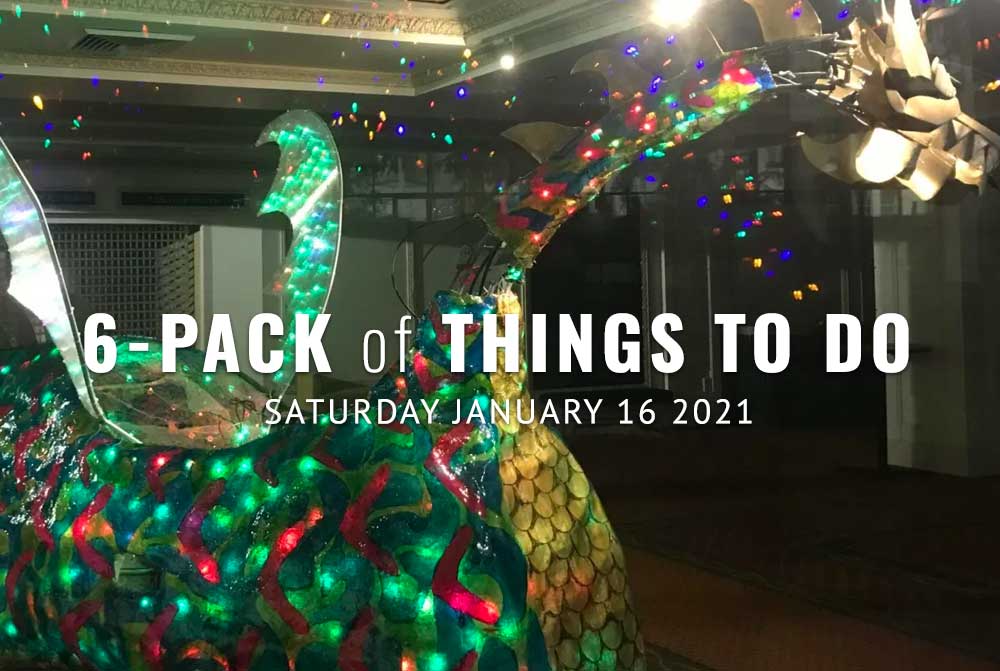 TACOMA LIGHT TRAIL: The Tacoma Light Trail is exactly that: a walking or driving trail around Tacoma’s downtown to see light art. The art – which ranges from projection mapping to video, illuminated sculpture and sheer blasts of light – is visible from the street in more than 50 locations through Jan. 24. An accompanying Sound Trail pairs local music, poetry or sound with each light location on the Echoes mobile app. Tonight, we suggest you start your walk on Broadway, between Seventh and Ninth, to take in Steve LaBerge’s “Lumos the Lucent,” Eric Taylor’s “Holiday Glamour,” and Linda Morrison and Nanette Colby’s “Flying Into The Light” at the Pantages Theater, Dragonfly and Mecca Mercantile, respectively. Launch the Echoes app to hear the songs of hope and life by the Puget Sound Revels, poet Josh Rizeberg, and singer Jim Meck. 5-9 p.m., though Jan. 24, 2021, free

BEER FLIGHT: What is a pastry stout? Stouts made with any number of baking ingredients, such as cinnamon, coconut, chiles, cacao nibs, (Noel also includes coffee in this mix, but Peaks and Pints thinks that’s crazy talk). Critics believe some of these beers have taken flavor additives too far and obscured the soul of good beer, but there are some delicious examples to seek out, such as the pastry stouts in our to-go flight today, Peaks and Pilots Program: Pastry Stouts On the Fly. 11 a.m. to 8 p.m., 3816 N. 26th St., Basecamp Proctor, Tacoma

FORT FROM HOME: Fort from Home brings the talents and expertise of Fort Nisqually interpreters to you live through interactive virtual programming. Today, Fort Interpreter Elizabeth will demonstrate straw platting techniques and tips. Straw platting is the process of turning natural fibers, such as wheat, into fabrics for use to make hats, bonnets, baskets and other wares. 11 a.m. to noon, Virtual Fort Nisqually, $10-$50 here

CLOSING: It opened in 1952 as a hamburger joint, but became known for their breakfast, Galloping Gertie’s will serve their last hamburger and pancake in Tillicum today. The bar and grill’s namesake and owner, Gertie Rice, passed away in 1991, but their friendly service never stopped. Tonight, there will be comedy and live music. Reserve your spot now before the joint gallops away. 5 p.m., 15417 Union Ave. SW, Lakewood (Tillicum), gallopinggertiesgrill.com

STUNT SHOW: Ever been hit in the head with a bowling ball? Matt Baker has. It’s his thing. The comic who’s been voted Seattle’s “Best Alternative Comic,” holds five Guinness World Records and appeared on Tosh.0 and America’s Got Talent — rests the bowling ball in the contour between his foot, ankle and leg. With a flick of his foot, the hefty ball flies into the air and lands with gasp-worthy grace on his forehead, where it rests. Stunts like this, paired with self-deprecating stand-up makes The Matt Baker Comedy + Stunt Show much different than your typical comedy stage gig. The Tacoma Musical Playhouse will stream his show tonight. 7 p.m., TMP Stunt Room, $25 here

MUSIC: Uncle Bonsai is the real deal. Filed most often under “folk” the original trio of Ashley O’Keeffe, Andrew Ratshin and Arni Adler made more than 200 original songs and toured like mad — including many shows in Tacoma — before taking an extended hiatus in the late 1980s, then resurfaced in 2008. Ratshin has released many a solo album of original material along the way and been included on a number of compilation projects and group tours. Sing Out magazine proclaimed Andrew “an absolute original” saying that “there’s more than enough brilliance here to entice and seduce open minded listeners who appreciate exceptionally well written songs.” Ratshin will be share new songs, as well as songs from the Seven Sins, Seven Wonders, Seven Dwarfs song cycle, and a couple old favorites, during a virtual concert tonight. 7 p.m., Konnectclub, $10+ here