Peaks and Pints Pilot Program: Quads On The Fly

The Belgian quadrupel is the strongest in a series of Trappist styles, beginning with the single (better known as an abbey), the dubbel (double) and the tripel (triple). Quads are the strongest of the Belgian beers, often more than 10 percent ABV. It’s a dark beer that ranges from black to deep red or garnet, with a rich bold maltiness that combines with yeasty hints of raisin, dates, figs, grapes and plums. The quad is not hoppy. It’s known for alcoholic warmth and a complex sweetness, with wine and liquor-like characteristics. Today, Peaks & Pints suggests a to-go flight of quads — a flight we call Peaks and Pints Pilot Program: Quads On the Fly.

Peaks and Pints Pilot Program: Quads On The Fly 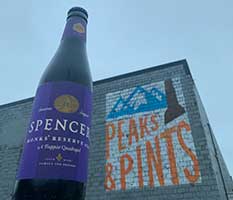 In January 2014, the 63 brothers of St. Joseph’s Abbey — about an hour’s drive west of Boston — received the thumbs up from the International Trappist Association, selling the first Trappist beer brewed outside Europe. Spencer Brewery Reserve Ale is a full-bodied classic Trappist quadrupel with a nose of dark malts, caramel, bread, raisins, figs, molasses, plums, cinnamon and herbal and earthy hops. The taste is sweet with strong notes of dried fruits and spices, while the background has a strong malty profile with notes of roasted malts, caramel and dark bread. 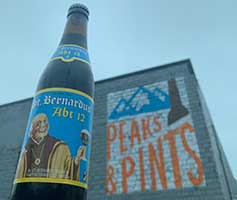 The Abt 12 is a classic Belgian dark quadrupel brewed since 1946, on the basis of the original recipe compiled by the Westvleteren monks that ended up at Brouwerij St. Bernardus. The Abt, or Abbot, another name for quadruple, is the highest-ranking monk in the abbey; so perhaps it’s no surprise that the brewery sees the Abt 12 as the highest-ranking amongst abbey beers. It hits the nose with banana, tropical fruit, raisins, spices and rum. The flavors come through as intensely fruity, with notes of banana, pineapple, as well as spicy clove, añejo rum and anise. Throughout the sip, spicy pepper and black licorice counter the sweetness before a flash of bitterness segues to the beer’s enduring dry finish. 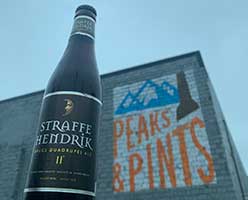 Produced by the oldest brewery in Bruges, Belgium, Brouwerij De Halve Maan’s Straffe Hendrik is a top fermented and bottle conditioned quad that made its debut in 1981 to commemorate the inauguration of a statue of St. Arnold, the patron saint of brewing, in Bruges. The name is not only a reference to the “strong” (straf) beer, but also pays homage to the generations of Maes scions, all called Henri — Hendrik — who were in charge of the brewery. Expect toasty malt, licorice, allspice, and pepper notes. Warning: It hides the alcohol well. 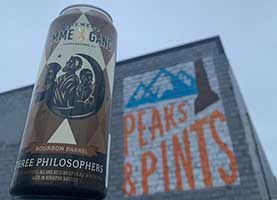 Brewery Ommegang’s Three Philosophers quadrupel ale combines a malty Belgian-style ale with Liefmans Kriek, an authentic cherry ale from Belgium. The recipe combines four malts (Pilsner, Amber, Caramel and Munich) with the cherry Kriek to create a beer reminiscent of sherry or port, with a mix of dark fruit, coffee, and raisin flavors that will only intensify as the brew ages. Then, Ommegang ages it in bourbon barrels for flavors of caramel, raisin, dried fruit, molasses, and vanilla and aromas of oak, vanilla, and subtle hints of cherry. The body is ample but still finishes faintly dry with lingering hints of the base malt and cherry, plus bourbon