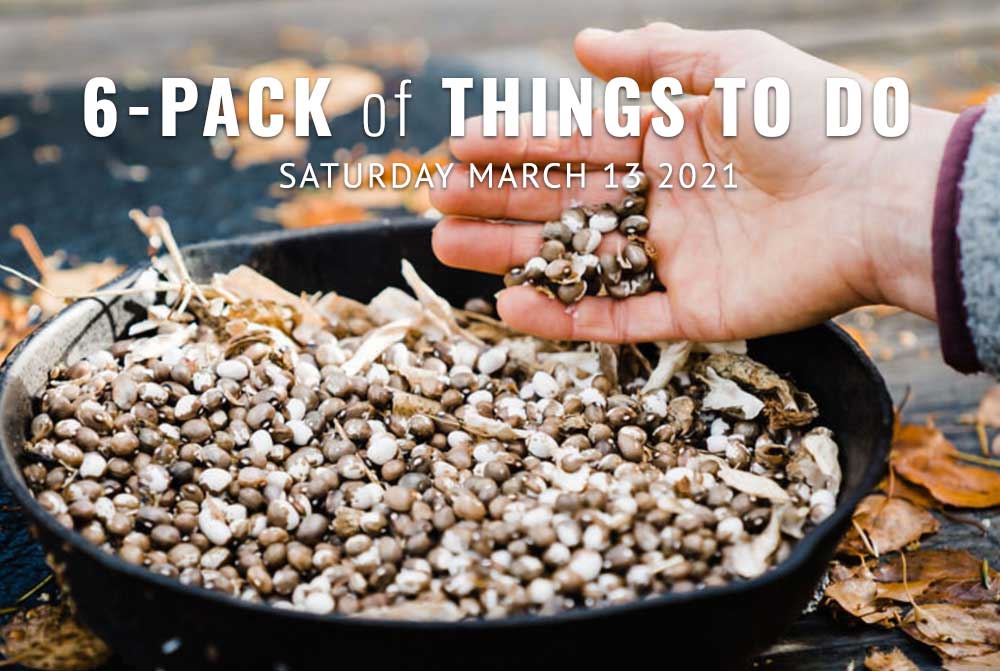 This is the time of year when the soul’s attention shifts from internal to external, from winter’s cozy home/hearth to nature’s boundless fertility, when the tides tremble and the moon winks and dogs get that look in their eye and the lagers flow like wine. A time in which, in the poetic words of Neil DeGrasse Tyson, “Atmospheric refraction hastens sunrise and delays sunset, adding to daylight.” So you know it must be good. Enjoy today’s 6-Pack of Things To Do. Cheers!

MARKET DAY: The Peaks & Pints hop plants have started to bud. It’s official; winter is over. The Proctor Farmers Market agrees. Today marks their final Winter Market. Who will be at the market today? Wild Seeds Farm on Vashon will board the ferry bright and early to sell their seeds in Proctor (pictured). The biodiverse food, medicine and seed farm breeds open pollinated vegetables, herbs, and seeds. Other vendors include Wilson Fish, Mound Lodge Farm lamb and cheese, Adam’s Mushrooms, Bloom Creek Cranberry Farm, Island Leafy Greens, Lavender Hill Farm, Purdy Organics and many others. 10 a.m. to 1 p.m., 27th Street and Proctor, Tacoma

BEER FLIGHT: Considered one of the top breweries in New Hampshire, University of New Hampshire grad Peter Beauregard opened Stoneface Brewing in 2014. The longtime homebrewer’s IPA placed first at the Boston Homebrew Competition the year before, confirming his decision to leave the software business and open a brewery with his friends, Erol Moe and Tim Finelli. Since then, Stoneface, located in Newington, has captured the attention of IPA lovers with their refreshingly hoppy beer. Peaks & Pints scored four of Stoneface’s beers, three of which are IPAs, for today’s to-go beer flight, Peaks and Pints Pilot Program: Stoneface Brewing On the Flight. 11 a.m. to 10 p.m., 3816 N. 26th St., Basecamp Proctor, Tacoma

RE-ENACTMENT: Over the winter of 1855 and 1856 soldiers from the American military base at Fort Steilacoom were posted at Fort Nisqually. The soldiers were stationed at Fort Nisqually at the request of the Fort’s Chief Factor at the outbreak of the Puget Sound Treaty Wars. This morning, living history volunteers from the Historic Fort Steilacoom Association will be interpreting this lesser-known history of the Fort. Visit the Fort or tune in virtually for interviews with American “soldiers.” 11 a.m., 5519 Five Mile Dr., Point Defiance Park, Tacoma, or Fort At Home Zoom ($10-$50), $30 or less

TOY SHOW: The ultra-rare Japanese mini-Boba-Fett-toy prototype is priceless. It sits atop a table at the Toy Man Toy Show, gleaming like the Holy Grail. It is a replica of the helmet of Boba Fett, badass bounty hunter from the Star Wars films, three inches high and made of clear plastic. There may only be one in the universe, young Jedi. Is it at the Washington State Toy Show this weekend? 10 a.m. to 5 p.m., Washington State Fairgrounds, Ninth and Meridian, Puyallup, $5-$10

CLASSICAL: Couldn’t we all use a little more tuba in our lives? Pacific Lutheran University Professor Dr. Gregory Youtz to the rescue! He will lead a discussion with the Symphony Tacoma’s trombone and tuba players — Keith Winkle (principal trombone), Grant Reed, (second trombone), Benn Hansson (bass trombone), and Paul Evans (principal tuba) — who will share the intricacies of their instruments and the different genres of music in which they play with Symphony Tacoma and elsewhere. 7:30-8:30 p.m., Symphony Tacoma Facebook Live, free

FILM: Jessica Barr is following in Lena Dunham’s footsteps, writing, directing and starring in her own thing, Sophia Jones. After her mother’s death, Jones (Barr) struggles to connect with her classmates. Her best friend starts to feel foreign to her, and she pours her uncertainty of the future into hooking up with boys. Barr’s feature debut is a coming-of-age story tangled in grief: How do you enjoy the pleasures of coming of age when you’re hit with an earth-shattering tragedy? Check it out in The Grand Cinema’s Virtual Screening Room. $12 rental, photo courtesy of jessiebarr.com