Peaks and Pints Pilot Program: Helles On The Fly

Helles is a German style blonde lager that is one of the few beers with an actual birth date of March 21, 1894, courtesy of the Spaten Brewery in Munich. Helles (pronounced “HELL-us”) was, like a few other styles, an invention of competitive necessity. In the mid 1800s, the Bavarian brewer, Josef Groll, developed a new style of beer for brewers in Plzeň, Bohemia — the pilsner. Gabriel Sedlmayr, owner of Spaten, would have none of it. That fateful March day he released an answer to pilsner — a light golden lager style called helles, which translates to “bright,” “pale,” or “light.” The Münchner (Munich) helles is known for being medium-bodied with an emphasis on malt character and low bitterness. The maltiness is soft and smooth, with bready or toasted qualities. A helles should be very clear and bright. These beers commonly range in alcohol content from 4.5% to 5.5%. This style is quite popular in Germany; it even outsells Oktoberfest beers at the Oktoberfest event in Munich. Hell yes helles is our to-go flight of the day. Stop by our Proctor District craft beer bar, bottle shop and restaurant and grab Peaks and Pints Pilot Program: Helles On The Fly. 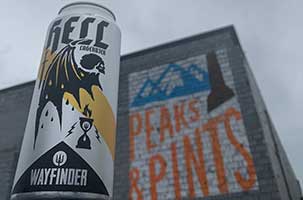 Peaks and Pints Pilot Program: Helles On The Fly

Welcome to Hell, Wayfinder Beer’s Munich-style helles lager, which was voted “Oregon Beer of the Year” in 2019 by New School Beer. This super clean lager smells of fresh baked white bread, honey, and floral hops. On the tongue, we get subdued malt character with a twinge of citrus — all set off with a fine, balanced hop bitterness. 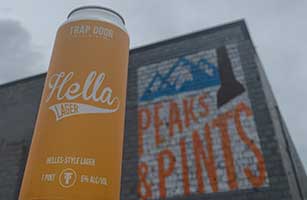 Trap Door Brewing Head Brewer Kyle Larsen put his own spin on the style utilizing Weyermann’s Barke line of malt, a simple and refined grist, combined with Hallertau Mittelfruh hops, and 5-plus weeks of lagering, creating a lovely drinking experience. It begins with floral hop notes then moves toward a biscuit like finish and clearing bitterness. 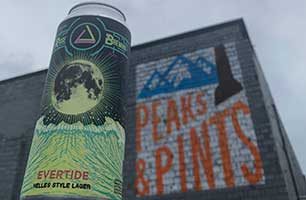 Ruse Brewing’s Evertide is an easy drinking, full-bodied helles-style lager that hits the nose with Pilsner malt, grassy and floral hop notes, freshly baked bread, and a little wet straw. The floral and grassy hops take flight followed quickly by delicious bready Pilsner malt. These two go back and forth before finishing with a nice, clean, and crisp light hop note. 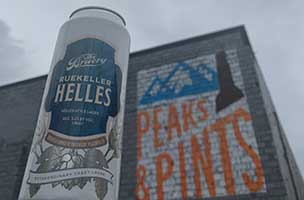 The name Ruekeller is a play on words, paying homage to both the traditional Krausen method of brewing fine lagers, and The Bruery’s namesake. In German, “ruh” literally translates to “quiet or “peace,” while in brewing, it refers to the step where almost finished beer rests in a secondary fermentation so that it can mellow and develop. The Ruhkeller, or “Rest Cellar,” is where the beer will be krausened. Krausening is a traditional German method for carbonating beers without using sugars or other adjuncts. Instead, actively fermenting malt wort is added to the fermented beer to provide the malted sugars needed for carbonation. During this step, the beer is crash cooled into what is referred to as lagering, lager meaning “to store.” This method is difficult in nature, meticulous in process, but the end product is an extraordinary craft lager brewed using Pilsner Malt, plus Magnum and Saaz hops. It’s easy drinking and full-bodied, with light bitterness, a touch of sweetness, and a clean and crisp finish.