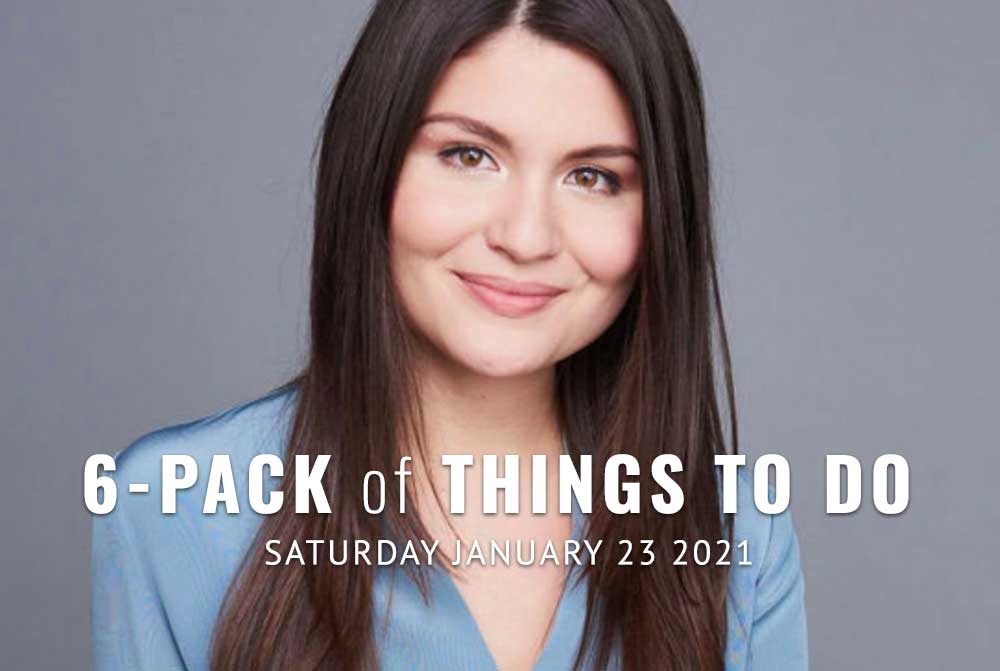 CELEBRITY: Best known for originating the role of Eliza Schuyler Hamilton in Broadway’s critically acclaimed show Hamilton, as well as earning a 2016 Tony Award nomination, Phillipa Soo will discuss her career and answer questions in the University of Puget Sound ASUPS Zoom Room. Soo can currently be seen in the film version of Hamilton and heard in the film Moana, and will soon appear with Peter Saarsgaard and Michael Keaton in Hulu’s Dopesick. 6 p.m., USUPS Zoom Room, free

BEER FLIGHT: In 2010, Boneyard Beer was launched in an old auto shop tucked away in the backstreets of Bend, Oregon’s historical district. Without any outside investors or major bank loans, Boneyard’s inception was unconventional to say the least. After decades in the brewing industry, owner Tony Lawrence built up a “boneyard” of old equipment he collected from 13 different breweries around the country. Alongside co-founders Clay and Melodee Storey, this second-hand brewing equipment was pieced together to brew the first batch of Boneyard Beer in May 2010. In July 2018, Boneyard opened a new taproom at 1955 NE Division Street in Bend; the location was formerly a Chinese restaurant as well as a Texas Hold’em poker room and a short-lived taqueria. Like many breweries during the pandemic, Boneyard decided to finally can their beer. Today, Peaks & Pints celebrates their cans in our cooler with a to-go Boneyard flight we call Peaks and Pints Pilot Program: Boneyard On The Fly. 11 a.m. to 8 p.m., 3816 N. 26th St., Basecamp Proctor, Tacoma

MUSIC: Have you heard? Kareem Kandi has no intention of letting jazz die in Tacoma. Not only does the saxophonist perform, teach, and produce concerts, he also interviews notable jazz performers for a world-wide audience. This afternoon, Kandi turns to mic and cameras toward guitarist, composer, and educator Dan Heck for a chat about his life in music. Born in Philadelphia, raised in eastern Long Island, Heck is a jazz guitarist/bassist and composer currently living and working in Naples, Florida. Will Heck discuss his Berklee College of Music years? Will he discuss his European tours? Will he discuss his award-winning Seattle jazz ensemble, Bebop and Destruction? Tune in. 3 p.m., Kareem Kandi Facebook Live or Kandi Youtube, free

TACOMA LIGHT TRAIL: Of course, the Old Post Office in downtown Tacoma is part of the Tacoma Light Trail. It’s a spectacular 100-year-old building and with its top floor grand ballroom light up in a feast of multicolor LED, it’s even more stunning. The Echoes app accompany music is “I Feel Your Pain” by Tacoma singer, composer, teacher and choir director Erin Guinup, with Darrell Hunt, violin and Amy Boers, piano.  This song acknowledges the pain that has been felt so widely this year and reflects Guinup’s commitment to fight for equity and healing. Tonight is the second to last night of the  Tacoma Light Trail — a free exhibition of light installations — with available music, poetry or sound to pair off the Echoes sound app. 5-9 p.m., through Jan. 24, 1102 A St., downtown Tacoma, tacomalittrail.com, Echoes sound app

THEATER: The cast from Tacoma Little Theatre’s 2017 production of Rumors will reunite to share their experience of putting on Neil Simon’s hilarious comedy. “Written by the legendary Neil Simon in 1988, Rumors concerns the attendees of a 10th anniversary party of New York City’s deputy mayor and his wife,” writes Weekly Volcano theater critic Rev. Adam McKinney. “As the play opens, the first two guests, Ken and Chris Gorman (Mark Peterson and Jess Allan), are already in a tizzy over what to do about the host — the deputy mayor is recuperating upstairs from a self-inflicted gunshot wound, and his wife is nowhere to be found. Tension builds as more guests begin to arrive and it becomes necessary to concoct a story about what happened, lest any of the well-to-do attendees get implicated in any shady business. Every actor gets their moment to shine with a cracking comic set-piece, but the play exudes its true power when all the characters come crashing together.” Log on, ask questions or just sit back and hear about their experiences. 7-8 p.m., TLT Castmates Zoom Room, free

FILM: The Grand Cinema has partnered with Film Movement to offer four Official Best International Feature Oscar submissions in their Virtual Screening Room. A new film will be released every Friday during the month of January, with Blizzard of Souls (Latvia) opening last Friday and You Will Die at Twenty (Sundan) opening yesterday. The debut from Sudanese director Amjad Abu Alala, You Will Die at Twenty follows a child — portended to die at age 20 — as he and his mother navigate the unchartered space between coming of age and facing the end. $10 rental/3 days to watch, photo courtesy of Film Movement