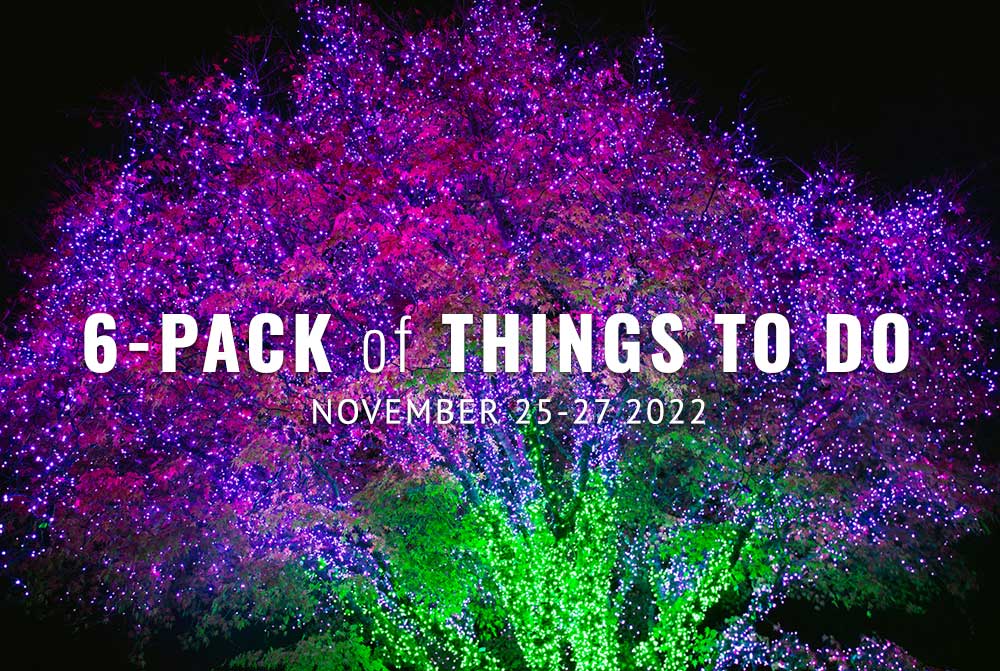 Skip the giant fluorescent-lit hellpits of heavily discounted spatulas and make your way to Peaks & Pints for a special 10 a.m. opening on Black Friday for the Goose Island goods as part of this weekend’s 6-Pack of Things To Do in the greater Tacoma area.

BLACK FRIDAY: Maybe you’ll be done buying discount TVs before 6 a.m. or maybe you’ve just got better things to do Friday than join the masses at the mall. Whatever the case, Peaks & Pints will open an hour early for special beer tappings and bottles in honor of the retail world’s big day. And while beer geeks will be hitting our Western red cedar tap tree and large cooler for the annual release of Goose Island Bourbon County Brand Stout and its variants, there are a few other treasures we’ll have in the lodge beginning at 10 a.m. So let go of the Walmart coupons and shine a little light on Black Friday by enjoying pints of Great Notion Double Stack, Goose Island Bourbon County 2021 and 2022, Goose Island 2022 Bourbon County Coffee Stout, AleSmith Minister of State, and AleSmith Vietnamese Speedway Stout, five different Goose Island Bourbon County Brand Stout bottles, and treasure from the Peaks & Pints cellar. 10 a.m. to midnight, Friday, Nov. 25, Peaks & Pints, 3816 N. 26th St., Basecamp Proctor, Tacoma

BEER FLIGHT: Goose Island Brewing Company first brewed their bourbon barrel-aged imperial stout in 1992 to commemorate the 1,000th batch of beer made at the company’s Clybourn brewpub. Ever since, Bourbon County Stout has grown into a highly anticipated annual release, dropping on Black Friday. When Goose Island concocted its first Bourbon County Brand Stout, the practice of barrel aging beer took an intoxicating turn. After three months inside used bourbon distillery barrels, the brew had a complex oak character from the wood and rich flavors from lingering whiskey — characteristics that made the Bourbon County Brand Stout an instant hit. Here it is November 2022, and Goose Island Bourbon County Brand Stout is still very much a thing, and so are its variants. Since Peaks & Pints caps the limit at two each of BCBS 2022 and one each of the variants, technically we have a to-go flight that we call Goose Island 2022 Bourbon County Stout Variants Flight. 10 a.m. to midnight, Friday, Nov. 25, Peaks & Pints, 3816 N. 26th St., Basecamp Proctor, Tacoma

GRIT AND GRAIN PODCAST: On this week’s Grit & Grain Podcast, hosts Matt McLaren, Sean Jackson and Ron Swarner hug it out in Episode 21. They awoke at the crack of dawn, stood in line for cheap waffle makers, then returned to the Parkway Tavern to answer listener questions, discuss their favorite beers, get in touch with their feelings and drink well. To listen to Grit & Grain Episode 19 with the three hosts, and the previous Grit & Grain episodes, visit gritandgrainpodcast.com, or search your favorite podcast mediums, including Channel 253.

ZOOLIGHTS: Nothing makes grown-ups want to snuggle more than a slow walk-through spectacular animal-themed Christmas lights while sipping hot chocolate under a cold, starry sky. In fact, many folks would pass through the seven levels of the Candy Cane Forest, through the sea of swirly twirly gum drops, and then walked through the Nelson Bennet Tunnel to see this year’s ZooLights at Point Defiance Zoo & Aquarium. Through Jan. 2, the Zoo is a colorful winter wonderland with more than 800,000 LED lights representing Northwest landmarks and zoo creatures. 4:30-10 p.m. nightly through Jan. 2., last entry is at 9 p.m., Point Defiance Zoo & Aquarium, 5400 N. pearl St., Tacoma

MOVIE: The Blue Mouse Theatre in Tacoma’s Proctor District will screen Black Panther: Wakanda Forever through Monday. The film begins with Black Panther, a.k.a. King T’Challa, a.k.a. Chadwick Aaron Boseman, dying off-screen of a mysterious illness. We’re in the lab with his sister Shuri (Letita Wright) as she does some crazy science to try to save him. Then the Marvel logo comes up and it’s all snippets of Boseman as Black Panther. Next, we see the beautiful funeral procession and watch Shuri touch her brother’s coffin before it is lifted into space and flown away. The film cuts to black, and it’s one year later. Queen Ramonda (Angela Bassett), Shuri, M’Baku (Winston Duke), Okoye (Danai Gurira) and the Dora Milaje (Florence Kasumba), fight to protect their nation from intervening world powers in the wake of King T’Challa’s death. As the Wakandans strive to embrace their next chapter, the heroes must band together with the help of War Dog Nakia (Lupita Nyong’o) and Everett Ross (Martin Freeman) and forge a new path for the kingdom of Wakanda. 7 p.m. Friday, Nov. 25-Monday, Nov. 28, 3 p.m. Saturday, Nov. 26 and Sunday, Nov. 27, Blue Mouse Theatre, 2611 N. Proctor, Tacoma

TREE LIGHTING: It’s the most wonderful time of the year: The time where we begin to bust out our ugly sweaters, stock up on hot chocolate, and fill up our gas tanks to go tour the most beautiful holiday lights in the area. Some are near, some are far, but nothing beats taking in the magic of the holiday season in the form of twinkling lights. Peaks & Pints suggests you pass through the seven levels of the Peppermint Place Forest, through the sea of swirly twirly gum drops, and then walked over the Proctor Bridge to enjoy the Proctor District’s annual tree lighting Sunday. Basin Pacific Insurance’s giant permanent tree is, once again, the Proctor District’s official holiday tree. Mr. & Mrs. Claus, Northwest Repertory Singers, and Proctor District businesses welcome everyone to join them for a festive night in Proctor. 6:30 p.m. Sunday, Nov. 27, Basin Pacific Insurance, 4001 N. 26th St., Tacoma