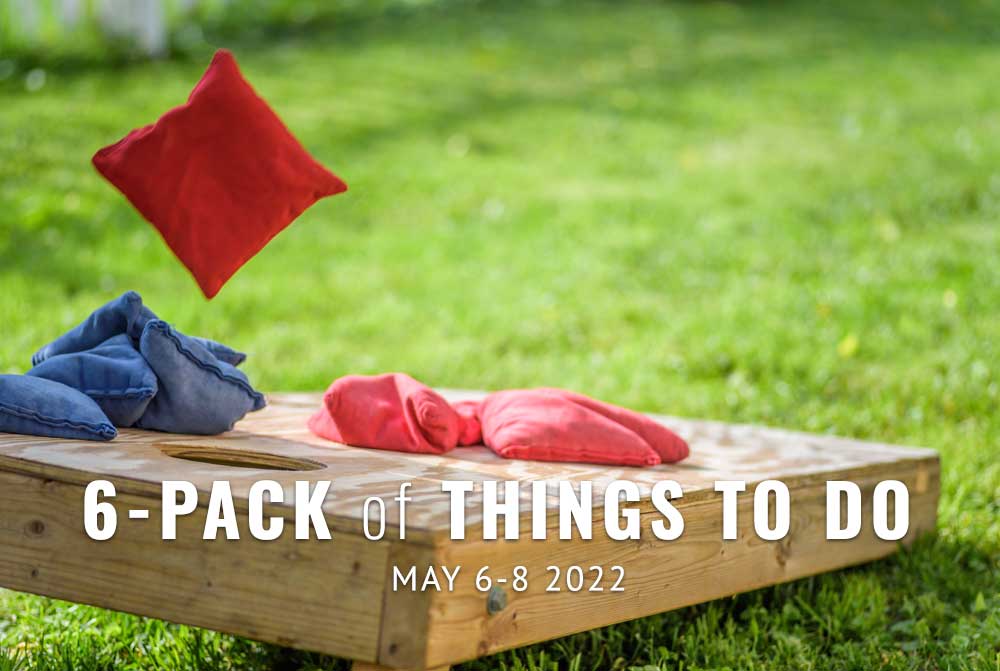 You’ve re-watched all the Star Wars films, ate all the tacos, and are now ready for a weekend in greater Tacoma, whether it be a cornhole tournament, free comic books or hanging out with Champ Kind. Welcome to 6-Pack of Things To Do: May 6-8 2022!

CORNHOLE TOURNAMENT: When a cornhole tournament hits the Peaks & Pints television screens it attracts more viewership and cheers than Major League Baseball or the Tour de France. While some may view it as a simple backyard activity — where competitors throw bags filled with corn or resin at a raised board with a hole in the far end — cornhole has grown and attempted to stake its claim as a legitimate sport over recent years. Tournaments are now broadcast on ESPN, and a new audience came aboard in the summer of 2020 when the COVID-19 pandemic forced major sports leagues to suspend their seasons. Fisher Scones hosts Throw Down In The Sound Cornhole Friday and Saturday at the Washington State Fairgrounds. Benefiting programs supported by Puyallup South Hill Rotary, this tournament is open to all skill levels with cash and prizes awarded to the top six teams in six divisions. Spectators welcome. 7 p.m. Friday, May 6, 10 a.m. Saturday, May 7, Ninth and Meridian, Puyallup

BEER FLIGHT: Portland, Oregon, is home to an abundance of old church buildings. Their spires front the hilly backdrop and skyline, adding to each neighborhood’s unique fabric. Changes in the city dynamics, though, have left many of these architectural stunners empty, abandoned, and crumbling. Across the city, though, several of these old buildings have experienced a revitalization where they’ve been repurposed for other uses — born again, including a 1909 church on the corner of Northwest Broadway and 24th, a tall, craftsman-era chapel made of Pacific Northwestern fir and cedar that now is a church of fermentation. In 2019, Brody Day and Dustin Harder converted the church into Steeplejack Brewing, a brewery, taproom, and restaurant that still looks like a church — a very cool church. The building’s stained glass windows loom above the brewery’s tanks and bar, and pews serve as banquettes for the wooden tables at the center of the space. Today, Peaks & Pints presents a mini to-go flight of Steeplejack beer — a flight we’re calling Peaks and Pints Pilot Program: Steeplejack Beer On The Fly. 11 a.m. to midnight, Friday, May 6, 3816 N. 26th St., Basecamp Proctor, Tacoma

FILM: Sam Raimi, who directed The Evil Dead, Oz the Great and Powerful, and Drag Me to Hell, directed Doctor Strange in the Multiverse of Madness, to add his signature campy frights to Marvel’s first horror-ish outing. It’s a movie well-suited to his sensibilities, full of monsters, portals to other worlds, evil spiritual books, doppelgängers, eyeballs where they don’t belong, and even the undead. The Blue Mouse screens this latest Doctor Strange flick this weekend. 7 p.m. Friday, May 6, 3:45 and 7 p.m. Saturday and Sunday, May 7 and 8, The Blue Mouse, 2611 N. Proctor, Tacoma

COMEDY: David Koechner is more than Champ Kind loud, boisterous quotes. If you want to get to know who Koechner really is, check out his shows Friday and Saturday at the Tacoma Comedy Club. Sure, he’ll probably mention the Anchorman films, The Goldbergs, The Office, The 40-Year-Old Virgin, Talladega Nights, and The Dukes of Hazzard, but Koechner is a pretty good yarn spinner and has all the material from his childhood. All right, fine: Whammy! 7:30 and 10:30 p.m. Friday, May 6, 10:30 p.m. Saturday, May 7, Tacoma Comedy Club, 933 Market St., Tacoma

WILD WONDERS: Point Defiance Zoo & Aquarium kicks off a new Wild Wonders animal show this weekend. “Extraordinary Creatures And How To Care For Them” stars a wizard, a zookeeper, and a very smart dog. There are broomsticks, potions, and rats. The show probably sounds very familiar to Harry Potter fans, but “Extraordinary Creatures and How to Care for Them” isn’t about magic. It’s about how the Zoo care for animals — and how everyone else can, too. 9 a.m. to 5 p.m., Saturday and Sunday, May 7 and 8, 5400 N. Pearl St., Tacoma

COMIC BOOK DAY: Picture this: A group of canine firefighters are on a fire truck, bells clanging, racing down the street. Chasing a cat. They’re passing by a real emergency: a house on fire. The firedog hanging onto the back of the truck, in full fire regalia, shouts to the people trying to flag them down: “Keep it going ‘til we get back!” Comic words by themselves are rather non-funny. But add the art and pow! Besides “Double Bubble” gum comics and licking off the sweet “powder,” young Peaks & Pints skipped the funnies and read comics with humorless muscle-bound heroes in Spandex saving the world monthly, or women who turn themselves into fire, and guys who shot ice from their hands to foil bank robberies.  Free Comic Book Day is going down this Saturday, and for many people around town, that means venturing into a comic bookstore for the first time. We understand that can be a terrifying experience, but don’t worry, the local comic bookstores have your back. Saturday, May 7, Stargazer Comics, 2610 Sixth Ave., Tacoma; Comiks The Gathering, 15022 Pacific Ave. S., Spanaway