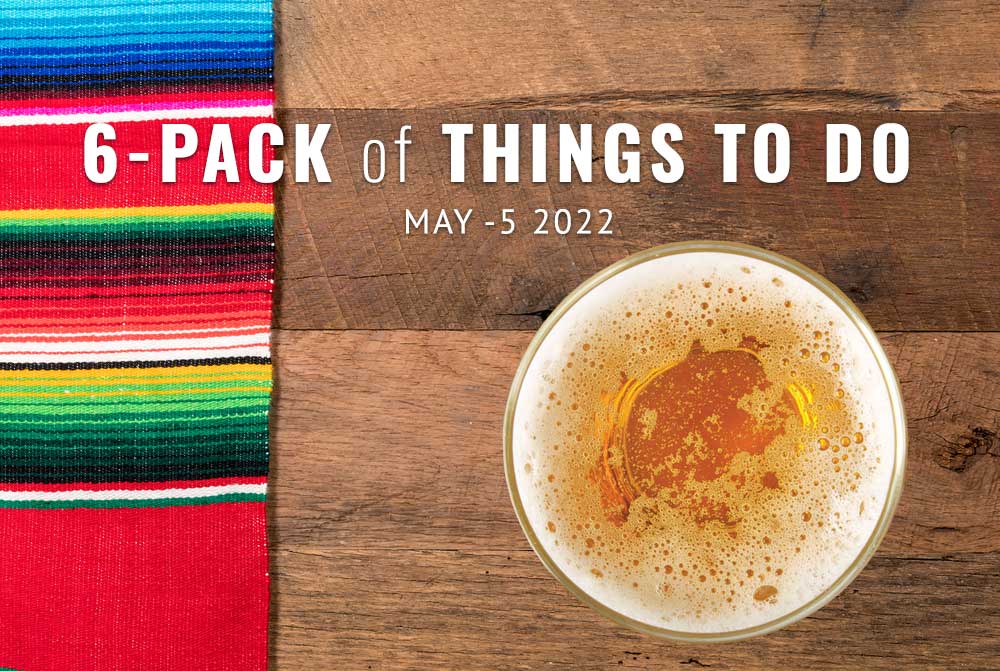 The next two days in Tacoma are packed, no doubt, with fun, with May the 4th parties followed by Cinco de Mayo events. And there are plenty of other things to do along the way, including a senior improv show at the University of Puget Sound, Tacoma Bike Month, and a kickass Viking flick. Cheers!

MAY THE 4TH BE WITH YOU: Drink craft beer, you must.  Today is May 4 — which may not mean a lot to a lot of people, but it’s a special date for serious Star Wars fans. May the 4th (as in “May the Force be with you”) is the day on which we celebrate all things Star Wars-related. And what better way to celebrate the date than by drinking space-themed craft beer while watching Star Wars from your couch. Where in the universe can you find such beer, padawan? Peaks and Pints: The Cooler Awakens. Embrace your inner Jabba (or related Hutt) and stop by our little craft beer lodge to put space in your face. Just leave the droids at home; we don’t serve their kind. 11 a.m. to 11 p.m. Wednesday, May 4, Peaks and Pints, 3816 N. 26TH St., Basecamp Proctor, Tacoma

CINCO DE DRINKO: Cinco de Mayo is Thursday, which means it’s party time Senor Garth. The best Cinco de Mayo parties feature live mariachi bands, Mexican-inspired craft beer, dancing Chihuahuas and beer bongs made from Saguaro cactuses. Peaks and Pints will offer one of those treasures for our Cinco de Drinko — Mexican-inspired craft beer on draft and in the cooler, a Mexican-inspired to-go beer flight, and a special Mexican sandwich special. Remember to say a little prayer for the feisty Mexicans who lost their lives May 5, 1862 fighting an invading French army so we could get our drink on safely. 11 a.m. to 11 p.m. Thursday May 5, Peaks and Pints, 3816 N. 26th St., Basecamp Proctor, Tacoma

FILM: The Northman screens at The Grand Cinema this week. Prince Amleth (Oscar Novak) is a scrawny yet determined son of King Aurvandil War-Raven (Ethan Hawke) in Iceland who is convinced he has everything it takes to be next in line. However, after Aurvandil is brutally murdered by his brother (played by Claes Bang), Amleth is forced to flee, vowing revenge. Two decades later, Amleth is fully grown, and fully savage, played now by Alexander Skarsgård. He has forgotten his desire for revenge and sets off to Iceland for clobberin’ time; a simple plan right up until he has an encounter with a strange witch (Björk) and develops the hots for an enslaved Russian named Olga (Anya Taylor-Joy) reigniting his fury and sets his plot into motion. 1:20, 4:20, and 7:15 p.m., The Grand Cinema, 606 S. Fawcett, Tacoma, photo courtesy of New Regency Productions

IMPROV: Behold as University of Puget Sound seniors delve deeper into scene work and develop their sense of ensemble in a Senior Improv Show today. Watch as they venture more in-depth into long-form improvisation with tags, walk-ons, and the three-beat scene structure. It’s the last show for seniors Gabi, RE, Willard, Mateo, Kenley, Alex, and Sam and, technically, they don’t know what they’ll be performing. 7-8 p.m., Wednesday, May 4, Rausch Auditorium, University of Puget Sound, 1500 N. Warner, Tacoma

TACOMA BIKE MONTH: When it comes to commuting via bicycle, there are thrilling upsides and harrowing downsides: the Don Henley-esque feeling of wind in your hair, for example, versus the sheer terror of a million one-ton boxes made of metal trying to kill you. Tacoma Green Drinks and Downtown On the Go gather at The Red Hot Thursday night to chat up Tacoma Bike Month and unleash Goldspoke Bike Repair on those who have bike issues. All are welcome, except jerks. 6 p.m., Thursday, May 5, The Red Hot, 2914 6th Ave Tacoma

MUSICAL OPEN MIC: As the spring weather and more widespread vaccinations converge, there’s something more than tulips blossoming in town these days: Live music is, well, alive once more. Tacoma is singing and tapping its toes more than it has for over a year — and for many, the relief is palpable. That includes not only music fans, of course, but the artists, club owners, and employees who have suffered more than a few existential crises during the pandemic. The Valley on Puyallup Avenue and host Elizabeth Ashbrook have launched a Thursday Open Mic for singer/songwriters, instrumentalists, jazz, folk, and all genres. 8 p.m., Thursday, May 5, The Valley, 1206 Puyallup Ave., Tacoma