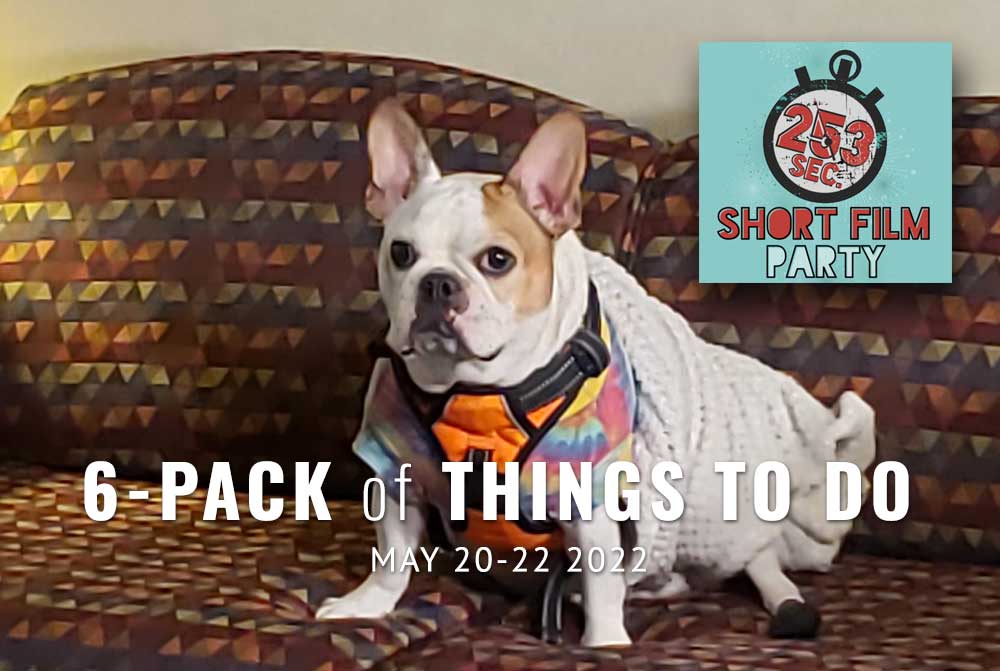 Stress, little sleep, and maximized creativity. These are the common elements in a 72-hour film festival and Tacoma’s iteration is no different. Add an international element to the Proctor Farmers Market, tank climbing, Orval Day, and glass blowers and this weekend is shaping up fine. Cheers!

253 SHORT FILM COMPETITION: Yes, it’s that time again: The Grand Cinema’s 253 Short Film Party returns tonight. Its evolution over the years has seen it rise from humble, let’s-put-on-a-show beginnings into a genuine behemoth. What started as 11 teams gathering at The Grand has ballooned into a totally legit happening. Every year teams of filmmakers collectively spill out of the woodwork to be met with the challenge of creating a 253 second film in only three days. As if that weren’t enough of a task, they are also required to somehow fit in a designated line of dialogue, a prop, a location, and an action. The 31 local film crews will gather at the Urban Grace to watch their creations with the public. Stop by Peaks & Pints before or after the screens for a Mason Ale Works Ob-1 Can-Obi hazy double IPA. 7 p.m., Urban Grace, 902 Market St., Tacoma, $16-$18

ORVAL DAY: Please visit Peaks and Pints as we join the top beer bars from across the globe in celebrating Orval Day 2022 Saturday, May 21. Orval Day celebrates a global ­flavor touchstone, a beer brewed within the walls of Belgian’s Notre Dame d’Orval monastery with a thousand-year history: Orval Trappist Ale. Intensely aromatic and dry, this Belgian pale ale is as complex as it is unique. Orval is bottle conditioned with three different malts, two types of hops, and undergoes complex fermentation with multiple yeasts including Brettanomyces. Peaks & Pints will offer Orval bottles to drink inside our craft beer lodge, or to take home. If you are celebrating at home follow these steps. First, grab your beer-clean Orval chalice. Second, gently pour until you have one centimeter of beer left in the bottle (per the instruction of the brewery). And last but not least, bask in the glory of this unique, Brett-y, dry-hopped wonder of Belgian craftsmanship. By participating in this event, you are also contributing to a great cause. On this day, Orval distributor Merchant du Vin will be making a charitable donation to the National Forest Foundation. 11 a.m. to midnight, Saturday, May 21, Peaks & Pints, 3816 N. 26th St., Basecamp Proctor, Tacoma

FILM: Sam Raimi, who directed The Evil Dead, Oz the Great and Powerful, and Drag Me to Hell, directed Doctor Strange in the Multiverse of Madness, to add his signature campy frights to Marvel’s first horror-ish outing. It’s a movie well-suited to his sensibilities, full of monsters, portals to other worlds, evil spiritual books, doppelgängers, eyeballs where they don’t belong, and even the undead. The Blue Mouse screens this latest Doctor Strange flick for the last time this weekend before Tom Cruise flies in next weekend. 7 p.m. Friday, May 20, 3:45 and 7 p.m. Saturday and Sunday, May 21 and 22, The Blue Mouse, 2611 N. Proctor, Tacoma

ARMED FORCES DAY: Armed Forces Day is a special holiday for people all over the world to come together and thank the men and women of the United States Armed Forces. First conceived by President Harry S. Truman, the holiday was established in 1949. The creation of a single day celebration for all five branches of the United States military made sense due to its recent unification under the Department of Defense. Today, Armed Forces Day is celebrated on the third Saturday of every May, this year falling on May 21. Joint Base Lewis-McChord will open to the public with free military displays, historical reenactments, and entertainment. 11 a.m. to 6 p.m., Heritage Hill, McChord Field, photo courtesy of MWR

TAG FESTIVAL: Artists from across the country and around the world will gather in Tacoma Sunday for the first annual TAG Festival: Together… in Art and Glass. The festival — free to the public — will showcase glass artists, muralists, potters and ceramicists, jewelry artists, painters and sculptors, crafts people of all kinds, live entertainment, food vendors, beer gardens, and local musicians Vicci Martinez, Amelia Day, Little Lies, and Sacred Janitor, among others encompassing Pacific Avenue from the Tacoma Art Museum to the Washington State History Museum, the Museum of Glass Plaza, and the Bridge of Glass. 10 a.m. to 5 p.m., 15th and Pacific Avenue, downtown Tacoma, no cover