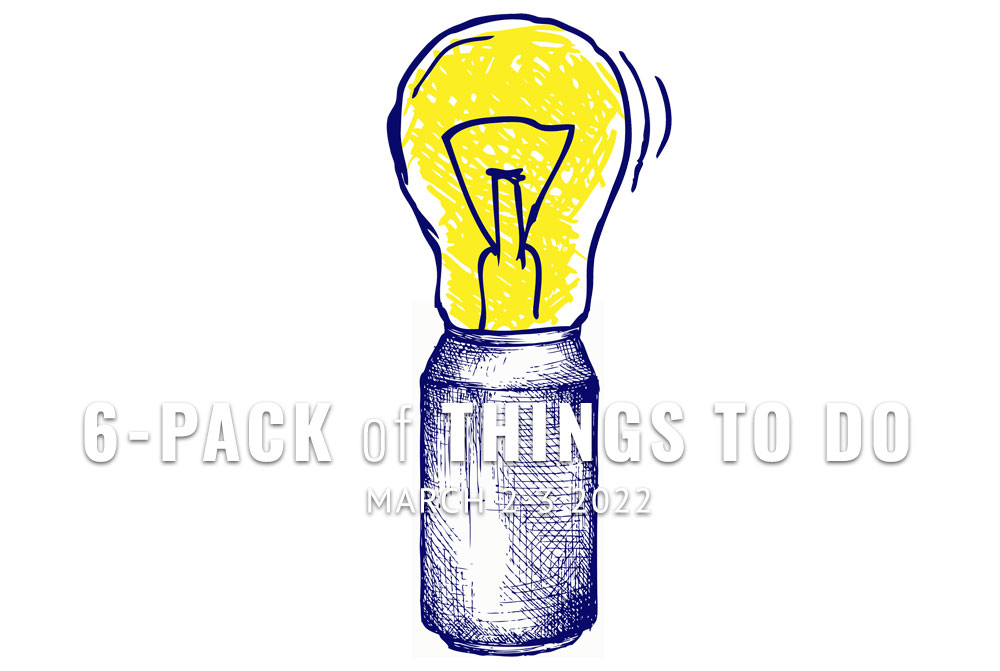 And with the notable exception of a few essential bodily functions, Peaks & Pints’ 6-Pack of Things To Do is an enjoyable read in the bathroom. It’s that relaxing sort of instant solitude, that immediate disconnection, that delicious kind of “At last I can hear the voices in my head” and “I am master of all I survey in this smelly eight-foot cube” and “Hell yes I’m going to nominate my favorite local lager for the Tournament of Beer: Northwest Lagers” between flushes. Nearly invisible you are, despite the windows; no one can disturb your personal aloneness, and no one can see you licking the spilled coffee off your cell phone as you read about today’s beer flight, no one can hear you singing old Lionel Richie ballads as you ponder joining the Knitty Gritty Stitchers or see you furtively picking your nose with your pinkie finger while scanning today’s Destiny City Film Festival options. It’s your bathroom. It’s your copy of 6-Pack of Things To Do: March 2-3 2022. It’s your turn to replace the toilet paper roll.

TOURNAMENT OF BEER: In April 2022, Peaks and Pints will host the Tournament of Beer: Northwest Lagers. Chosen through a public nomination process, the top 64 vote getters — the real lagers of genius — will compete Monday-Friday on our website, April 8-30. Through online voting, Washington and Oregon pale lager drinkers will pick daily winners until the best lager in the Northwest is crowned. It’s just like March Madness, only with way more burps. The crispy boi battle grand champion will be announced at the Tournament of Beers Party April 30 at Peaks and Pints in Tacoma’s Proctor District. The final two lagers will battle live pouring from Peaks and Pints’ Western red cedar tap log with the champion brewery receiving a permanent handle at Peaks and Pints through the spring and summer. First, we need you to help select the 64 lagers that should be included in the tournament. Vote for your three favorite regular lagers brewed in Washington and Oregon here, maybe win a $25 Peaks & Pints gift card, then look for the first round of Tournament of Beer: Northwest Lagers voting April 8 at tournamentofbeer.com.

FILM: Though several trophies for this year’s Academy Awards aren’t deemed kinetic enough to be presented during the televised Oscar ceremony, The Grand Cinema give several of them their well-deserved due over the next couple weeks. Film lovers can catch all the nominees in the Animation, Documentary and Live Action short film categories on the big screen. For the past decade, The Grand and hundreds of other theaters across the United States and Canada have partnered with Shorts TV to present each year’s nominated short films to local audiences well in advance of when the Oscars are given out on March 27. Click here for starting times for Oscar nominated Animation, Documentary and Live Action shorts.

FILM: The Destiny City Film Festival’s ninth edition continues through March 7 featuring a hybrid format of virtual screenings and limited in-person events. The homegrown film fest will showcase independent films from the Pacific Northwest and beyond. The lineup includes more than 40 films in addition including short films (narrative, documentary, animation and experimental), feature films (both narrative and documentary), music videos, student films, films made by Washington state residents, and short screenplays. Six distinct awards will be presented with winners determined by a jury of film professionals and by audience choice. For tickets and event dates, click here.

FIBER ART: Do you enjoy knitting, quilting, or any other fiber art? Then Knitty Gritty Stitchers is for you. The Stitchers will meet virtually Wednesday night for a BYOS event, which means bring your own stitching. They meet virtually via Zoom every month for a one-hour session where they share projects they are currently working on and socialize with like-minded folks. The Stitchers want you to join them. Register here and receive a Zoom link via email one hour before they get down with knitty gritty. 6:30-8 p.m., Knitty Gritty Stitchers Zoom Room

COMEDY: Big Jay Oakerson rolls into the Tacoma Comedy Club Thursday night for a New York City-style comedy show for three nights. He’s one of the most beloved and easily recognizable comedians in The Big Apple. His easy charm and dirty delivery endear him to audiences every night at The Comedy Cellar, The Stand, and Stand Up New York. Oakerson has recently been featured on This Is Not Happening with Ari Shaffir, Comedy Underground with Dave Attell, FX’s Louie, Inside Amy Schumer, and Late Night with Jimmy Fallon. 7:30 p.m. Thursday, March 3, 7:30 and 10:30 p.m. Friday and Saturday, Tacoma Comedy Club, 933 Market St., Tacoma