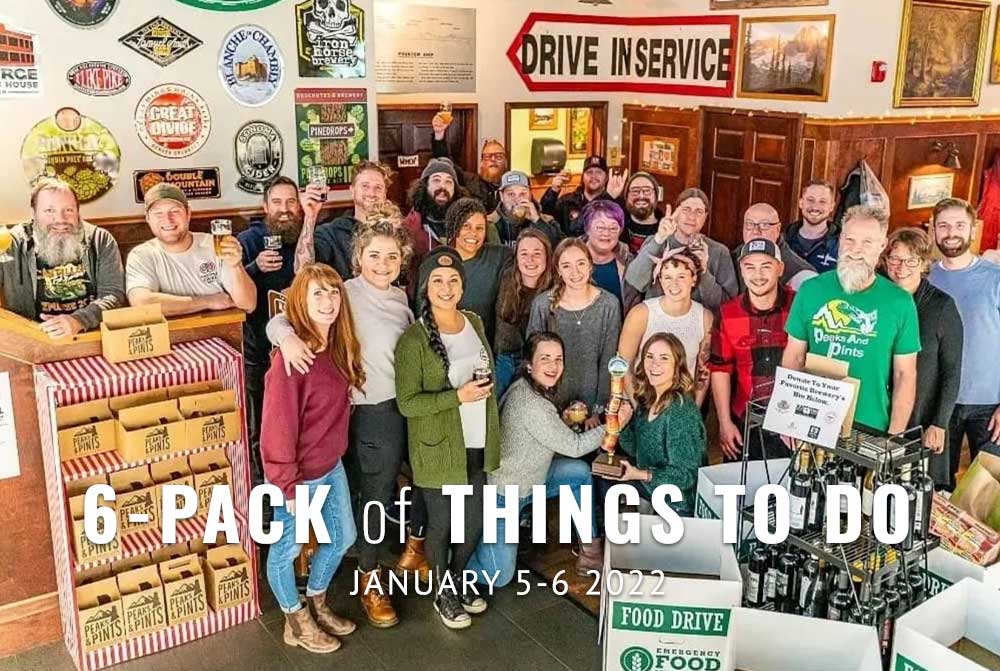 We must move. Forge ahead. Seek truth. Smile and sigh through the cotton/lycra covering part of our faces. Get on with it. The other option is just fatalism and doom and endless whining. And no one wants that. Everyone wants 6-Pack of Things To Do: January 5-6 2022. Cheers!

FOOD DRIVE PARTY: The Hoppy Holiday Food Drive brought together nine local Pierce County breweries and cideries for a friendly competition to collect non-perishable food and hygiene items for Emergency Food Network, or EFN. Peaks & Pints is, once again, honored to host the Douville Home Group’s Hoppy Holiday Food Drive Celebration Party at 6 p.m. Thursday, Jan. 6. This event will include raffles for swag (must be present at the event), guests tap from each brewery and cidery, a last chance to give donations, and finally, the awarding of the Hoppy Holiday Food Drive 2021 Tap Handle Trophy to whichever brewery/cidery brings in the most food and/or dollars. 6-8 p.m. Thursday, Jan. 6, Peaks & Pints, 3816 N. 26th St., Basecamp Proctor, Tacoma

MUSIC: The Weekly Volcano described the band How Now Brown Cow as “… Coltrane playing the theme song to CHiPs, mixing high art with ’70s camp. Throw in tasty samples and some cowbell, and, boy, you’re cooking up a party. Bowmp chicka bowmp bow.” Sound like your thing? The funk and jazz quartet will be improvising at The Spar tonight. 7-10 p.m., Wednesday, Jan. 5, The Spar, 2121 N. 30th, Old Town, Tacoma

MUSIC: Rockaroake is the brainchild of George Aragon and Rusty Urie, formerly of Hit Explosion, who employ a rotating group of local musicians to feed their live band karaoke night. While there have been a few bars that have tried hosting karaoke nights with live bands, Jazzbones’ Rockaraoke live band karaoke is one of the ones that’s lasted. 9:30 p.m. Wednesday, Jan. 5, Jazzbones, 2803 Sixth Ave., Tacoma

FILM: Director Sean Baker’s Red Rocket film stars Simon Rex, who plays as a washed-up porn star who returns to his small Texas hometown, but his return is not welcomed by his neighbors, especially his estranged wife, Lexi (Bree Elrod), with whom he tries to crash. The charismatic grifter is confident in his ability for self-improvement, or at least that’s what he tells everyone else. His plans go awry when he meets a young woman named Strawberry (Susanna Son) and gets mixed up with some shady characters. In his zigzagged path to redemption, his biggest obstacle may prove to be himself. Catch Red Rocket at The Grand Cinema the next two days, then swing by Peaks & Pints to discuss the film over a pint of Black Raven Macho Grande hazy IPA. 1, 4, and 7 p.m., Wednesday-Thursday, Jan. 5-6, 606 S. Fawcett, Tacoma, photo courtesy of Focus Features