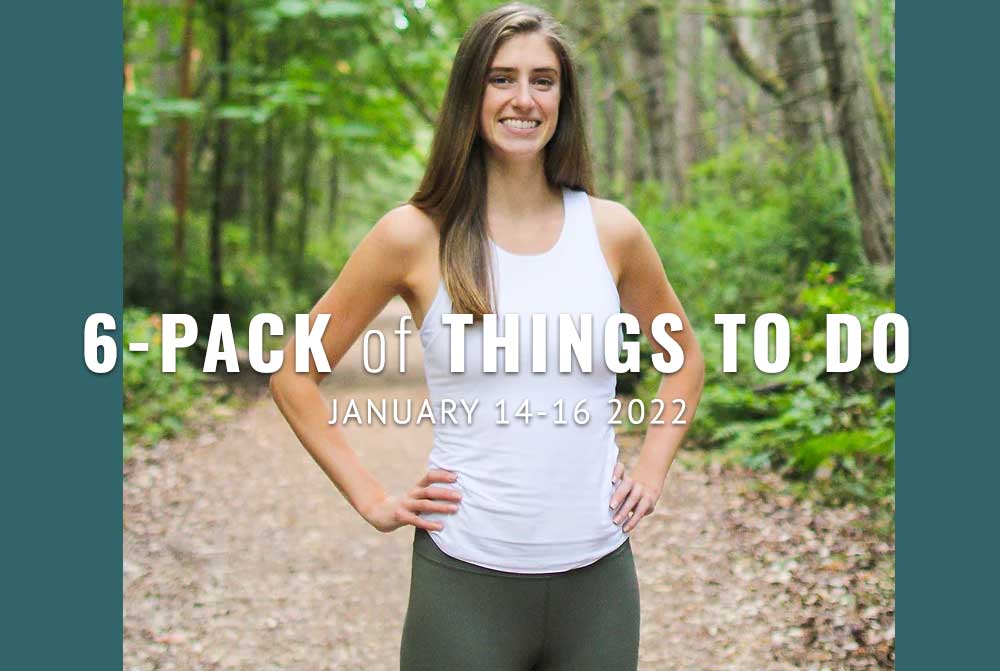 The vast and impossible, beautiful and terrifying, liberating and wildly deity-drunk hallucination continues. 6-Pack of Things To Do: January 14-16 2022 offers a weekend of masked merriment. Cheers!

BURPEES AND BREWS: Nothing builds community faster than a room full of people performing burpees and then laughing about it over beers afterward. Yes, indeed, exercise can be tough, and sometimes it takes a bit of extra effort to get off the couch and get moving. As it turns out, the best form of motivation often comes in the form of a beer at the end of an especially hard workout. Daryl Marie knows this. The collegiate athlete with a Psychology Bachelor’s Degree, Certified NASM Personal Trainer, and craft beer enthusiast will host a free personal training class at Peaks & Pints Saturday morning, Jan. 15. That’s right; the owner of SUPR Personal Training will lead a free hour-long fitness class at the craft beer lodge in the Proctor District, then buy the class a beer while raffling off prizes. You must sign-up here and wear a mask when not drinking your award. 10-11 a.m., Saturday, Jan. 15, Peaks & Pints, 3816 N. 26th St., Basecamp Proctor, Tacoma

BEER FLIGHT: Englishman Adam Robbings’ beer recipes had much success at homebrew competitions, including winning the silver medal at the National Homebrewing Competition in 2012, and his talent, along with a Kickstarter campaign that raised close to $11,000, eventually earned him, and his wife Grace, their own brewery — Reuben’s Brews officially opened in Seattle’s Ballard district in August 2012, which they named after their son, Reuben. Since then, the team has accrued an astounding number of accolades, including more World Beer Cup medals than you have fingers and toes. Today, Peaks & Pints presents a to-go flight of Reuben’s beers — a flight we’re calling Peaks and Pints Pilot Program: Reuben’s Brews On The Fly. 11 a.m. to 10 p.m. Friday, Jan. 14, 3816 N. 26th St., Basecamp Proctor, Tacoma

MOVIE: Thanks to the worthy screenplay by James Vanderbilt and Guy Busick and the stylish and Wes Craven-influenced direction by Matt Bettinelli-Olpin and Tyler Gillett and the ease with which Neve Campbell, Courteney Cox and David Arquette return to their roles, the new Scream stabs and jabs at our memories of the original and creates some bloody fresh twists of its own. Yup, the franchise springs back to life — and death — by bringing back Sidney, Gale and Dewey in a clever and organic way. Catch it at The Grand Cinema. After screaming, swing by Peaks & Pints for a pint of Structures Brewing Who Goes There IPA. 12:30, 3:15, 6 and 8 p.m., Friday-Sunday, Jan. 14-16, 606 S. Fawcett, Tacoma

MONSTER JAM: This weekend, bringing with it some thirty tons of flying truck, Monster Jam invades the Tacoma Dome. You know the basic idea here — overgrown toys flying over dirt and crushing old-junked sedans, Pit Parties where you can pose with trucks 12 feet tall and 12 feet wide with 66-inch tires, and wheelie contests where trucks fly over jumps vertically then topple sideways and skid upright for half the length of a football field. Neat! 7 p.m. Friday, 1 and 7 p.m. Saturday, 1 and 6:30 p.m. Sunday, Jan. 14-16, Tacoma Dome, 2727 E. D St., Tacoma, Ticketmaster

PINEWOOD DERBY: Design, assemble, and test out your own pinewood derby car before racing against other LeMay – America’s Car Museum visitors on a full-length Pinewood Derby track located in the Family Zone. Enter the fast-talking announcer person: “Due to the recent surge in COVID-19 cases, this will be a no-contact program. Pinewood Derby kits will be available for children and families at Guest Services; however, no Museum Educator will be on-site to facilitate the activity.” 11 a.m. to 3 p.m. Saturday, Jan. 15, LeMay – America’s Car Museum, 2702 E. D St., Tacoma