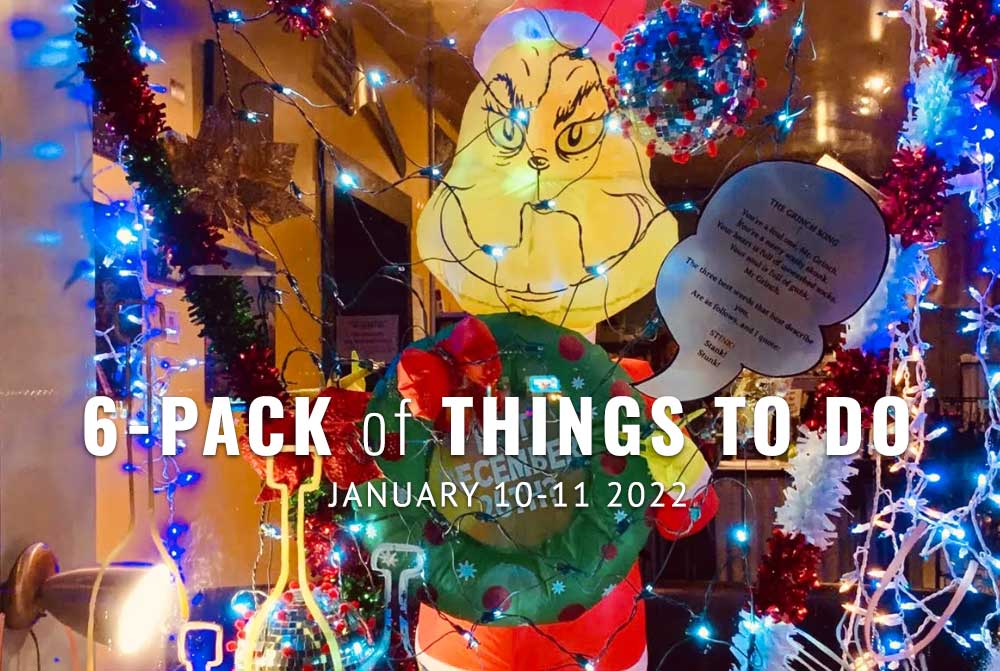 If we all agree on one thing, it’s that human life is a slippery, ephemeral whim, a puff of sacred nonsense designed by gods drunk on irony and Spider-Man and quantum physics. All your normal reference points of local events are not merely ever in flux, but prone to being completely, ferociously upended, transformed, and blasted anew in a blip of a global cataclysmic OMGWTF. You crave some innate, inviolable calm amidst the chaos? There’s only one place to get it: Peaks & Pints 6-Pack of Things To Do: January 10-11 2022. Everything else is karmic rabbit-hole nostalgia.

TACOMA LIGHT TRAIL: The Tacoma Light Trail features more than 50 artists, arts organizations, businesses, and downtown spaces hosting free light installations, including the window of Stink Meat + Cheese where not even the Lisa Kinoshita’s Grinch can stop the Tacoma Light Trail from bringing joy to the city. Kinoshita is a Tacoma jewelry and mixed media artist, gallerist, and curator, who owns Minka Art & Vintage, when she’s not checking on the Grinch’s heart size. Be sure to launch “Joy to the World,” performed by Jinshil Yi, piano and Jieun Yun, organ, as part of the installation. 5-9 p.m., through Jan. 16, 628 St. Helens Ave., Tacoma Theatre District, Tacoma

CIDER FLIGHT: Consider the vanilla bean. The Aztecs did. In addition to inventing long words ending in “atl” and awesome mythology, they had the patience to figure out how to cultivate vanilla — a particularly difficult flavor to come by. The pods are the fruit of an orchid plant (Vanilla planifolia), and they must be cured and fermented over the course of about six months. If that weren’t involved enough, the high-maintenance orchid itself must be pollinated by hand. Mexico continues to be a major producer, but bourbon vanilla pods from Madagascar are the Chanel No. 5 of vanilla, valued for its rich depth of flavor. For many years now, vanilla has been the adjunct that takes a cider’s status from gold to platinum. Not wanting to waste a drop we present Peaks and Pints Monday Cider Flight: Vanilla Bean. 11 a.m. to 10 p.m., Monday, Jan. 10, 3816 N. 26th St., Basecamp Proctor, Tacoma

LECTURE: The Tacoma Tree Foundation hosts a lunchtime tree talk featuring Tacoma native and sustainability professional Lexi Brewer discussing “Trees and Climate Change: Local and Regional Connections.” Brewer invites you to think about the connections between trees and the climate at the local, regional, and planetary levels. Stop by Peaks & Pints before the lecture and grab Rainy Daze Brewing’s Only The Tip spruce Double IPA to sip on during the lecture. Noon, Tuesday, Jan. 11, Tacoma Tree Foundation Zoom

CONCERT: The band Tool hasn’t received the respect that it should. Sure, they spawned a legion of milquetoast mainstream nu-metal bands but it’s not Tool’s fault. The press decided Tool performed music for meatheads, but meatheads didn’t care because they just wanted to hear big, loud, dark rock and roll. From the early 1990s to 2006, the foursome of Tool stood as a rock-and-roll epitome when rock and roll was a social average. Tuesday, Tool tools around the Tacoma Dome. Stop by Peaks & Pints before the show and sip on Old Schoolhouse Brewery’s Kief Box IPA.  7:30 p.m., Tuesday, Jan. 11, 2525 E. D St., Tacoma, $75 at Ticketmaster, photo credit Travis Shinn