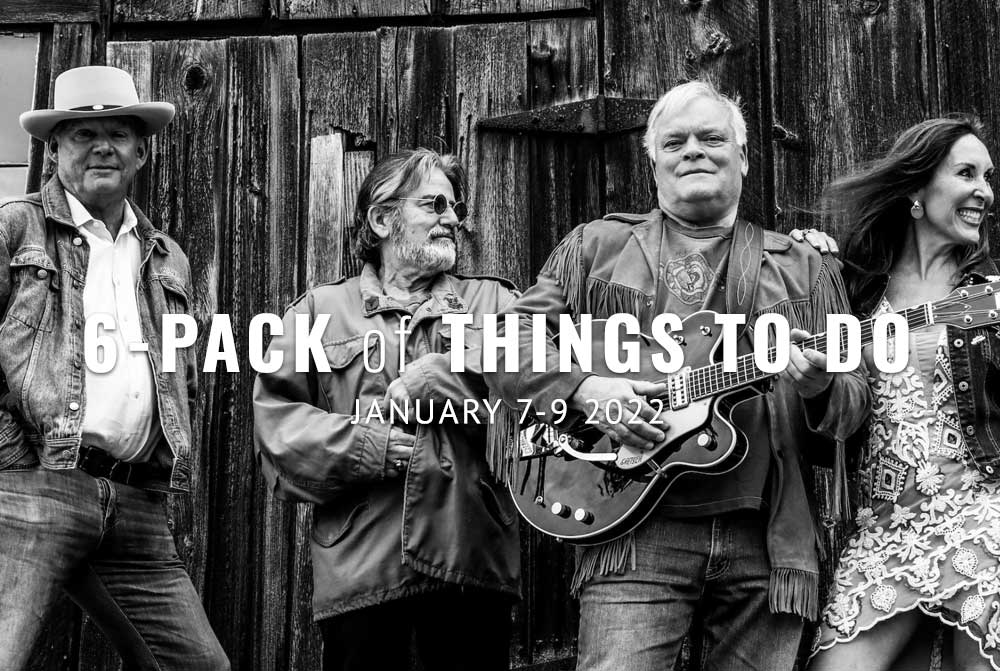 Peaks & Pints is dead tired from egg nogging our way through holiday parties. Thank goodness all that crazy applesauce has passed through the colander for another year. Now we can get back to a regular schedule of pairing local events with craft beer. Welcome to 6-Pack of Things To Do: Jan. 7-9 2022 in the greater Tacoma area. Cheers!

MUSIC: During a moment in which the ability to remain calm is disconcertingly connected to the size of your Purell and paper towel stockpile, the sanitized pop sounds of 1970s Southern California can project an inherent comfort. Tupelo’s music, both originals and covers, reflects the Iconic Sound of the 1970s Southern California rock and country rock scene invoking sounds such as the Eagles, Fleetwood Mac, and Linda Ronstadt. Catch the band at The Spar Saturday night. Stop by Peaks & Pints first and enjoy Southern California’s Mongo Double IPA from Port Brewing. 7-10 p.m., Saturday, Jan. 8, The Spar, 2121 N. 30th, Old Town, Tacoma

BEER FLIGHT: Joel Gregory, homebrewer and electrical engineer, opened Ex Novo Brewing in July 2014 with the mission to contribute profits to its four primary nonprofit partners: Friends of the Children, IJM, Impact NW and MercyCorps. These are organizations that work mainly to build stronger communities for the poor by reducing violence, providing support, and, in the case of Friends of the Children, by working with kids to break the cycles that keep communities in poverty and violence. Gregory initially envisioned the Northwest Portland brewery as a small neighborhood pub and gathering spot. It wasn’t long before he realized Ex Novo beer was a thing and the brewery expanded to two more locations, added Browar Polska to distribute its beer and built a mantle for their beer awards. Today, Peaks and Pints presents a to-go flight of Ex Novo beer — a flight we call Peaks and Pints Pilot Program: Ex Novo Brewing On the Fly. 11 a.m. to 11 p.m., Friday, Jan. 7, 3816 N. 26th St., Tacoma

PINBALL TOURNAMENT: Think you play a mean pinball? Prove it. You’ll be up against the best of the flippin’ best at the Sunday weekly Pinball Tournament at Airport Tavern. All told, 30 different machines will be ready for the challenge. And don’t worry about loading up with quarters: Five bucks buys all the pinball you can handle with three strikes. It should be enough to make even the deaf, dumb, and blind kid tilt. 5 p.m. sign-up, 6 p.m. start, Sunday, Jan. 9, 5406 S. Tacoma Way, Tacoma

FILM: Of all the holiday movies there is only one where you can see a slug sing Drake’s “Hotline Bling.” Ah, the magic of cinema! Sing 2, the sequel to the 2016 animated hit, packs the jukebox again with more than 40 songs, from BTS to Billie Eilish. The film from Illumination, the animation studio of Despicable Me and Minions, derive a lot of their appeal from a karaoke game of pairing a chart-topping hit with the appropriate anthropomorphic animal. The options are as vast as the animal kingdom. Should Cardi B be sung by a bumblebee? Is it too on the nose to give “Savage” to a stallion? Find out at The Blue Mouse Theatre this weekend. Afterward, discuss the film at Peaks & Pints with an E9 Brewing Riffage IPA. 7 p.m., Friday-Sunday, 4 p.m. Saturday and Sunday, 2622 N. Proctor St., Tacoma, photo courtesy of Universal Studios