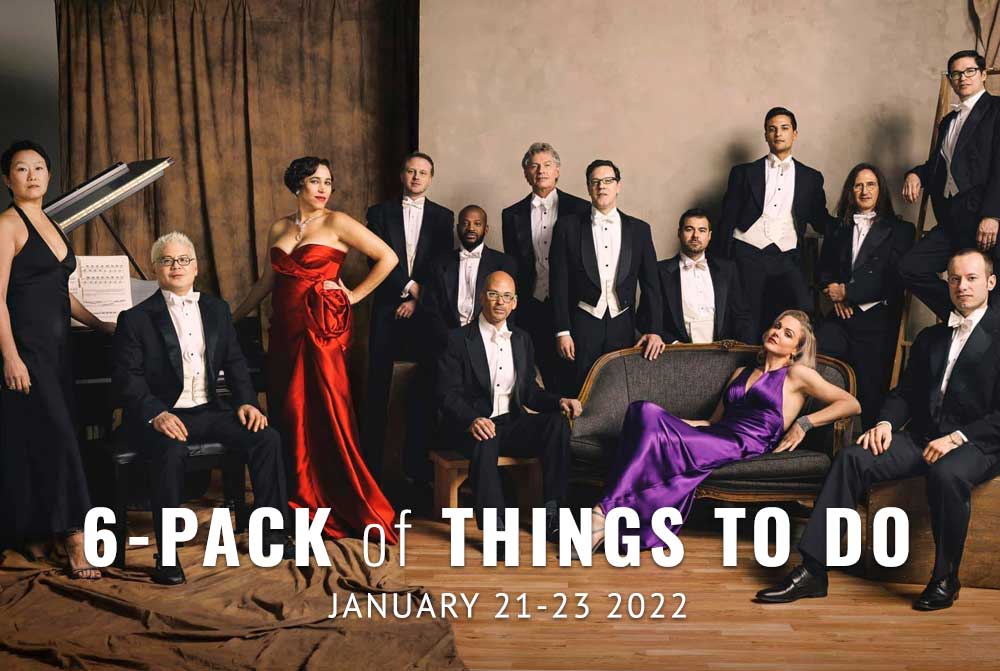 MUSIC: Pianist Thomas Lauderdale and his legendary Portland-based jazz and classical pop ensemble will perform at the Pantages Theater Sunday night. Pink Martini‘s blend of American swing, Latin rhythms and chamber arrangements, along with vocals in five languages, give the group’s largely original material mass appeal. Lauderdale of Portland, Oregon, founded the “little orchestra” Pink Martini in 1994. It has gone on to become a genre unto itself. 7:30 p.m., Sunday, Jan. 23, Pantages Theater, 901 Broadway, tickets here, photo courtesy of Facebook

TACOMA RV SHOW: There’s nothing more American than a recreational vehicle. Here’s a car that’s literally as big as a house, equipped to the nines with every sort of modern amenity you can think of, a brazen gas-guzzler ready to tear giant swaths of land apart, highway by scenic highway. Anyway, The 38th Annual Tacoma RV Show will feature hundreds of new RVs, ranging from Class A motor homes to lightweight pop-up trailers, including toy haulers, and 40-foot giants with all the trimming. Go big! 11 a.m. to 8 p.m., Friday, Jan. 21, 10 a.m. to 8 p.m. Saturday and Sunday, Jan. 22 and 23, Tacoma Dome, 2525 E D St., Tacoma

FILM: During the early 21st century, a war broke out between humanity and a race of artificially intelligent machines created to serve them. The machines won: All human civilization was decimated, while the sun and sky were blotted out by a near-impenetrable cloud of nanites in a last-ditch effort to deprive the machines of the solar energy they needed to function. With no other options and on the verge of extinction, the machines captured the remaining humans on Earth and siphoned the combined electric, kinetic, and thermal energy of their bodies for power. The fourth Matrix film, Resurrections, which is playing this weekend at The Blue Mouse, continues the battle between humans and the machines. Stop by Peaks & Pints for a piost-movie discussion over  an Equilibrium Brewing Mass X Acceleration Double IPA. 7 p.m., Friday, Jan. 21-Sunday, Jan. 23, also 3:15 p.m. Saturday and Sunday, Blue Mouse Theatre, 2611 N. Proctor, Tacoma

MUSIC: Tacoma garage punk band Evil On Repeat is finally letting loose the Repeat pause button and will rock The Valley Saturday night with Dehiscent and Bantangas. After a two-year hiatus, the Evil On repeat trio is now a foursome ready to unleash the guitar riffs, high adrenaline and fast paced tracks that earned them the “Evil” part of their name. Dehiscent guitarist Jon, bassist Hatchet, and drummer Frosty will fill The Valley with doom metal. Bantangas is a fun word to say. Stop by Peaks & Pints before the show for a Baerlic Punk Rock Time IPA. 9 p.m., Saturday, Jan. 22, The Valley, 1206 Puyallup Ave., Tacoma

MUSIC: Since the late 1970s Randy Hansen has been emulating the music, the look and the groove Jimi Hendrix developed during his short but lustrous career. Hansen’s choice licks are memorable, and his phrasing is flawless as he rips through classics such as “If 6 Was 9,” “Crosstown Traffic,” and a rendition of “Voodoo Chile” that easily rivaled Stevie Ray Vaughn’s version with precision. While nobody can ever replace Hendrix, you’d be hard pressed to find a more dedicated musician keeping his legacy alive. 9 p.m., Saturday, Jan. 22, Jazzbones, 2803 Sixth Ave., Tacoma