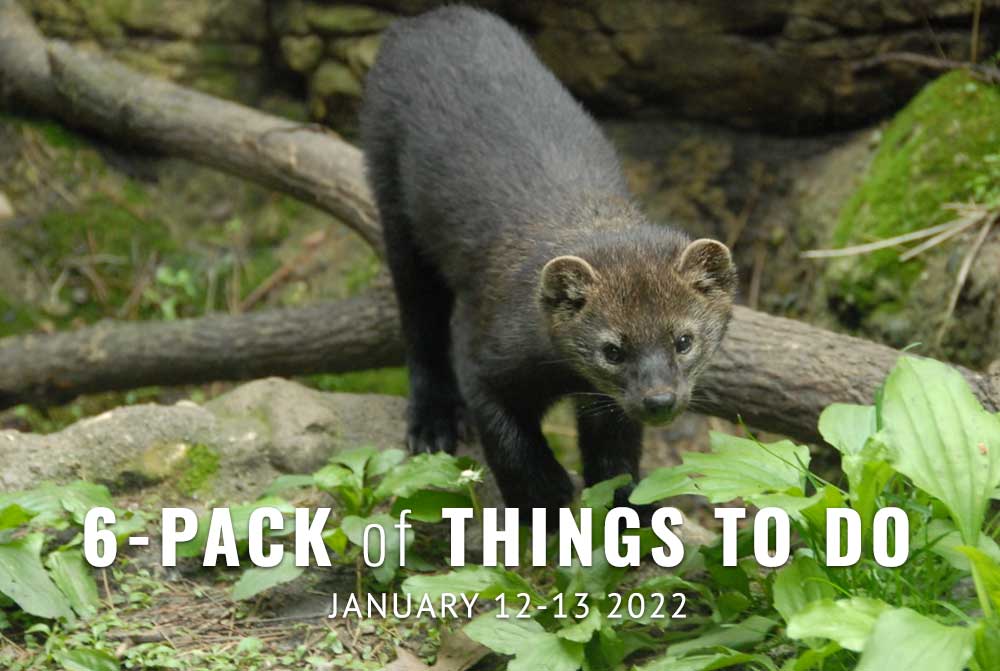 This is the year. No, really. This is it. This is the year you resolve to let it all hang out and lick the fingertips of the divine and stop holding back and stop quivering with unchecked anticipation/dread as you realize that, if you care a whit for self-definition and spiritual nuance and double masking and deep karmic social distancing in this rain-hammered, Covid-ravaged world, then jump on 6-Pack of Things To Do: Jan. 12-13 2022 and resolve. Cheers!

FROLIC FOR FISHERS: Drinking For Conservation — a sub-organization of the Point Defiance Chapter of the American Association of Zookeepers that raises money for endangered species through benefit nights at Tacoma taverns and bars — hosts a fundraiser for fishers at Peaks and Pints bottle shop, taproom and restaurant in Tacoma’s Proctor District tonight. Fishers? Indeed. The fisher (Martes pennanti) is a member of the weasel family, like the marten. Fishers are common in the Northeast and Midwest, but rare in the Northern Rockies and Northwest, where they are one of the rarest carnivores. Over-harvesting for pelts and loss of forest habitat due to logging and road building has significantly reduced and fragmented the fisher’s range in the Northwest. Join Drinking for Conservation to support this special species at Peaks and Pints. For every draft pour of beer, cider, and wine, Peaks and Pints will donate 50 cents to the Washington National Parks Fund to support fisher conservation. Sniff around Peaks and Pints at 6 p.m., drink delicious craft beer and help keep fishers thriving in the Northwest. 6-9 p.m., Wednesday, Jan. 12, 3816 N. 26th St., basecamp Proctor, Tacoma, photo courtesy of guppiecat via creative commons

BEER FLIGHT: The cocoa bean or simply cocoa, which is also called the cacao bean or cacao, is the dried and fully fermented seed of Theobroma cacao, from which cocoa solids and cocoa butter can be extracted. Chocolate is typically made from cacoa nibs, sugar, and cocoa butter, all of which must be (hopefully organically) processed before it becomes something you’d recognize and want to put into your mouth. Today, Peaks & Pints presents a to-go flight of beer brewed with cocoa nibs. 11 a.m. to 10 p.m. Wednesday, Jan. 12, 3816 N. 26th St., Basecamp Proctor, Tacoma

FILM: Two years after his wife’s unexpected death, Yusuke Kafuku (Hidetoshi Nishijima), a renowned stage actor and director, receives an offer to direct a production of Uncle Vanya at a theater festival in Hiroshima. There, he meets Misaki Watari (Toko Miura), a taciturn young woman assigned by the festival to chauffeur him in his beloved red Saab 900. As the production’s premiere approaches, tensions mount amongst the cast and crew, not least between Yusuke and Koji Takatsuki, a handsome TV star who shares an unwelcome connection to Yusuke’s late wife. Forced to confront painful truths raised from his past, Yusuke begins — with the help of his driver — to face the haunting mysteries his wife left behind. Adapted from Haruki Murakami’s short story, Ryusuke Hamaguchi’s Drive My Car is a haunting road movie traveling a path of love, loss, acceptance, and peace. It’s a winner of three prizes at the 2021 Cannes Film Festival, including Best Screenplay. Catch it at The Grand Cinema before it disappears Friday. 2 and 7 p.m., Jan. 12-13, 606 S. Fawcett, Tacoma, photo courtesy Janus Films

TACOMA LIGHT TRAIL: The Tacoma Light Trail features more than 50 artists, arts organizations, businesses, and downtown spaces hosting free light installations, including Randy Morris’ “Meteor Shower” at the Foss Waterway Seaport, illuminating the century-old trusses with fiery globes of recycled metal and vintage lights. Morris is an Everett artist who works in recycled materials and solar power. Be sure to click on the “Sound Trail” on Tacoma Light Trail’s website to pair the “Meteor Shower” with “Fire Mountain” (excerpt), by Daniel Ott, performed by Symphony Tacoma in collaboration with the Museum of Glass. 5-9 p.m., 705 Dock St., Tacoma, no cover

BREWERS NIGHT: It’s 160 days until summer in the City of Destiny, and you know what that means: Little Radio’s Endless Summer Soirée! Born of an intense need to escape the most depressing depths of winter, Endless Summer gives attendees an opportunity to travel to a tropical wonderland full of fruity booze, badass big wave videos, and filthy, sweaty table volleyball. The downtown restaurant and bar teams up with 7 Seas Brewing to create cocktails with the brewery’s Heidelberg Premium Lager. Come decked out and ready to get some sun! 7-9 p.m., Wednesday, Jan. 12, 728 Pacific Ave., Tacoma

MUSIC: Kaitie Wade, a pop-country singer-songwriter and recording artist from Seattle, will hit the Spanish Ballroom stage Thursday. Since calling Nashville her second home, Wade might wade through some worthy Nashville stories, in between lyrics such as “I’m a wreck in high heels, ain’t about skipping meals, sleeping with CEOs or signing ten-year deals.” Wade has performed in some of Nashville’s most famous Honkey Tonks and showcases, and has opened for multiple country stars including Russell Dickerson, Adam Craig, and Riley Green. 7 p.m., Thursday, Jan. 13, Spanish Ballroom, McMenamins, 565 Broadway, Tacoma, all ages, no cover