Peaks and Pints Pilot Program: Cocoa Nibs On The Fly

The cocoa bean or simply cocoa, which is also called the cacao bean or cacao, is the dried and fully fermented seed of Theobroma cacao, from which cocoa solids and cocoa butter can be extracted. Chocolate is typically made from cacoa nibs, sugar, and cocoa butter, all of which must be (hopefully organically) processed before it becomes something you’d recognize and want to put into your mouth. Most cocoa beans originate in Peru, Belize, or Madagascar and then stored in a climate-controlled room where inferior beans are removed. The good ones are then slow roasted in a modified coffee roaster, a giant machine of big, silver cylinders that looks like it’s meant to mix cake batter. Once the beans are roasted, still more industrial apparatuses begin to click and whir, beginning with a winnowing machine, which cracks open roasted beans, separating the nibs from the husks that are whisked away by a vacuuming device. The nibs, known as cocoa powder and used to make chocolate, are pulverized, and then ground into liquid form with stone wheels that resemble the landing gear of a jet airliner. This is the point at which the whole mess starts to look like chocolate — with the addition of organic sugar and homemade cocoa butter with a grinding device like an automobile carburetor, out of which creamy liquid chocolate happens. Several hours later, the mixture is moved to a conching machine, another automated metal bowl, where it’s heated and gets creamy again. In another big metal bowl, the chocolate gets tempered, which makes it shiny. The whole shebang gets set aside to age for a week or two and, once they’re hardened, the nibs of chocolate are aged for several weeks and later melted for use in making craft beer. About two weeks later, the cocoa-infused craft beer arrives at Peaks and Pints in Tacoma, Washington, where it’s placed with six other cocoa-infused craft beers and named Peaks and Pints Pilot Program: Cocoa Nibs On The Fly 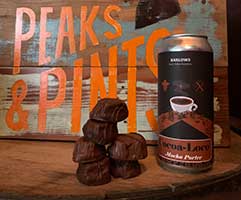 Peaks and Pints Pilot Program: Cocoa Nibs On The Fly

Barlows Brewery added Kafiex Roasters’ single-origin Brazilian cold brew coffee to their base porter. Next, they layered in lactose for the body and Ecuadorian cacao nibs for a double shot of chocolate decadence. The result is a velvety smooth beer boasting baker’s chocolate aroma up front and finishing with hints of almond and cherries. 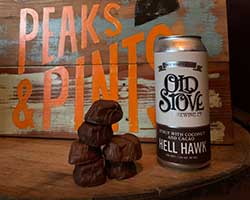 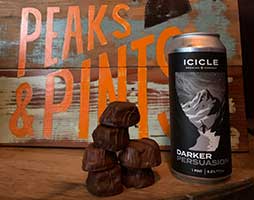 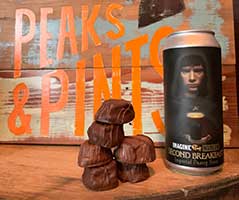 Imagine Nation Brewing’s Second Breakfast Pastry Stout is dedicated to those who wish they were hobbits, is a collaboration with Equal Exchange Coffee Roasters out of Portland. Brewed with lactose for a big, creamy body, this beer is conditioned on maple syrup, grade A vanilla from Papau New Guinea, organic cacao from Ghana, and organic coffee beans from Equal Exchange.  Even though the maple and chocolate are flavor forward it’s not overly sweet. 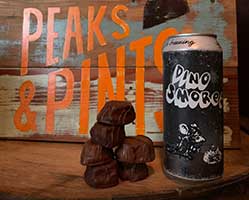 John Laffler of Goose Island and Dave Bleitner of Two Brothers opened Off Color Brewing in March 2013. At the brewery’s launch party, a local pastry chef cooked up a batch of dinosaur-shaped s’mores for munching; these treats provided the inspiration for an imperial stout Off Color would later brew in collaboration with Danish brewer Amager Bryghus and venerable Windy City bottle shop West Lakeview Liquors. The beer — flavored with marshmallow fluff, molasses, vanilla beans, graham flour and cocoa nibs — was named Dino S’mores and has been available since 2014. It’s sweet and sugary, with a bouquet of blackstrap molasses, graham cracker and marshmallow fluff atop a layer of alcohol, vanilla, marshmallow, and milk chocolate. 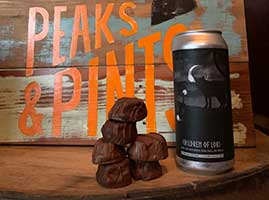 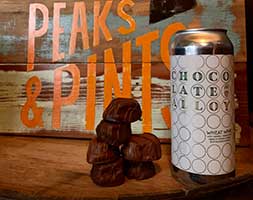 Wheat wine is a beer style generally perceived as somewhere between a barleywine and a pastry stout. It’s a strong ale that includes a portion of wheat in its grain bill. Like barleywine, wheat wine is sweet, malty, and high in alcohol. The amount of wheat can vary, but typically comprises about half of the grain bill, or roughly 40 to 60 percent. The rest is barley malt. Lumberbeard Brewing aged their Alloy wheat wine in wheat whiskey barrels from Dry Fly Distilling.  A variation of Alloy wheat wine with the addition of vanilla and cacao nibs aged in wheat whisky barrels. It’s decadent, and flavorful with lasting notes of vanilla.