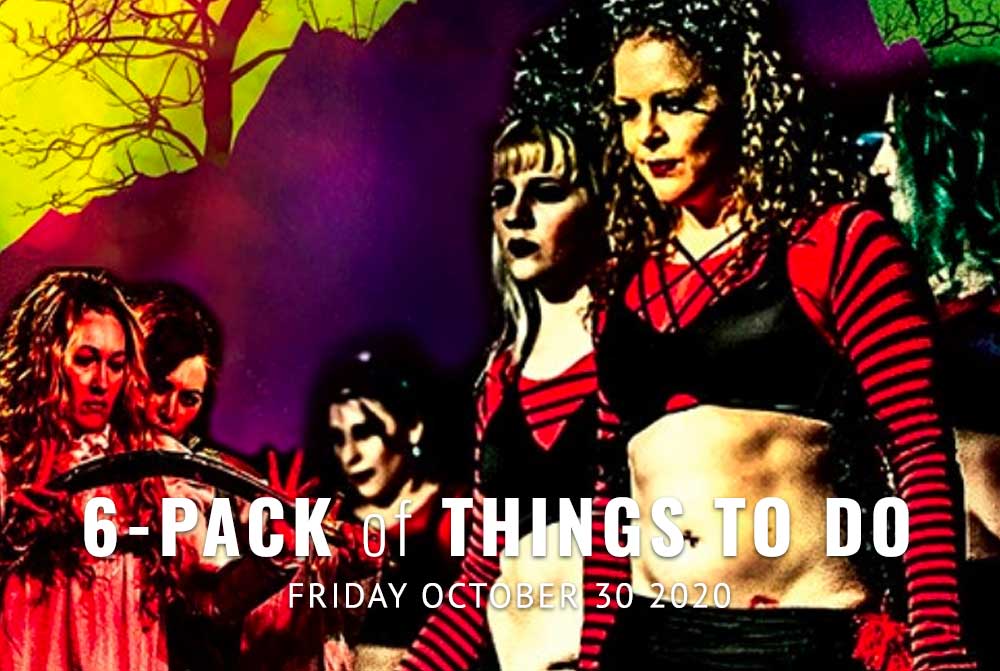 Happy Friday! 6-Pack of Things To Do takes you to Tacoma, Puyallup, and the Internet. Cheers!

I VANT TO VAMP: Unless you’ve been living in a cave, you know that Halloween is right around the corner. But then again, there’s a good chance you have been living in a cave, every night is fit for batty behavior, and tonight is no exception! Tacoma Dance Studios and Horrific: A Night of Horror Themed Dance present Devils Night In: A Halloween Dance streaming on Alma Mater Tacoma’s Youtube channel. Don your cape and get screechy with them from your living room. 7:30-9 p.m., Alma Mater Youtube

BEER FLIGHT: Why an IPA flight a day before Halloween? First, the majority of the world’s hops are harvested in late summer, starting at the tail end of August and stretching into September. After harvesting, most hops are kilned and pelletized, a process that can last until it gets cold. Brewing a beer when the hops are at their freshest, for the brightest possible hop character, happens to land at the beginning of winter. Second, this time of year IPAs carry a little bit more malt, incorporating adjuncts like cedar, and a touch more alcohol to shake off winter’s chill. Stop by Peaks and Pints and grab this three beer to-go flight, Peaks and Pints Pilot Program: Autumn IPAs On The Fly.  11 a.m. to 10 p.m., Peaks & Pints, 3816 N. 26th St., Basecamp Proctor, Tacoma, guaranteed seating via Open Table app

HAUNTED CAR WASH: Nothing much to see here. Just a creepy clown suddenly appearing at your windshield as you creep through the rinse cycle. It doesn’t exactly rival your local haunted house. On the other hand, those frights don’t conclude with a sparkling clean car. Now through Halloween, Classy Chassis Car Wash will be haunted by ghouls and zombies. Thrill-seekers don’t leave their cars. Monsters don’t open doors. Everyone wears masks, some of which drip with blood-like substance. 7-10 p.m., 5002 Center St., Tacoma, 11304 Canyon Road E., Puyallup, $20 per carload

THEATER: On Sept. 12, 2001, after a stunning halt to nearly all normal activity, life resumed for most Americans. And yet, we knew that everything had changed. Our sense of security was shattered. More broadly, we wondered what forces had led to this calamity. Craig Wright attempts to address the existential questions of free will and predetermination in Recent Tragic Events, a play set in Minneapolis on the day after the Twin Towers fell. Tonight, the Pacific Lutheran University Theater and Dance Department virtually presents this quirky and dark comedy about two people on a blind date the day after the Sept. 11 terrorist attacks. 7:30 p.m., PLU Theater Zoom Room, $5 donation

THEATER: “In a bit of an unexpected move, Tacoma Little Theatre has staged their own production of Evil Dead: The Musical, complete with a “splatter zone” on either side of the stage for audience members who don’t mind donning ponchos and getting showered with fake blood,” writes theater critic Rev. Adam McKinney in a October 2019 Weekly Volcano. “… Evil Dead: The Musical appeals to the giddy 13-year-old in all of us: cheesy puns, zany slapstick, bodacious babes, righteous dudes, and gallons of blood are all on the table.” Tonight, that TLT cast of 2019’s Evil Dead: The Musical reunites to share their experience of putting on this bloody audience favorite production. 7 p.m., TLT Zoom Room, no cover, photo courtesy of Dennis K Photography

MOVIE: The Donut King tells the story of Ted Ngoy, a Cambodian refugee who arrived in Los Angeles in 1975 and changed everything we know about America’s favorite pastry, the donut. While building a multi-million-dollar empire that effectively kept Dunkin’ Donuts out of Southern California for decades, Ngoy became a hero of the Cambodian community by sponsoring hundreds of visas for incoming refugees. Stream The Donut King in The Grand Cinema’s Virtual Screening Room. $9.99 movie, photo courtesy of Facebook