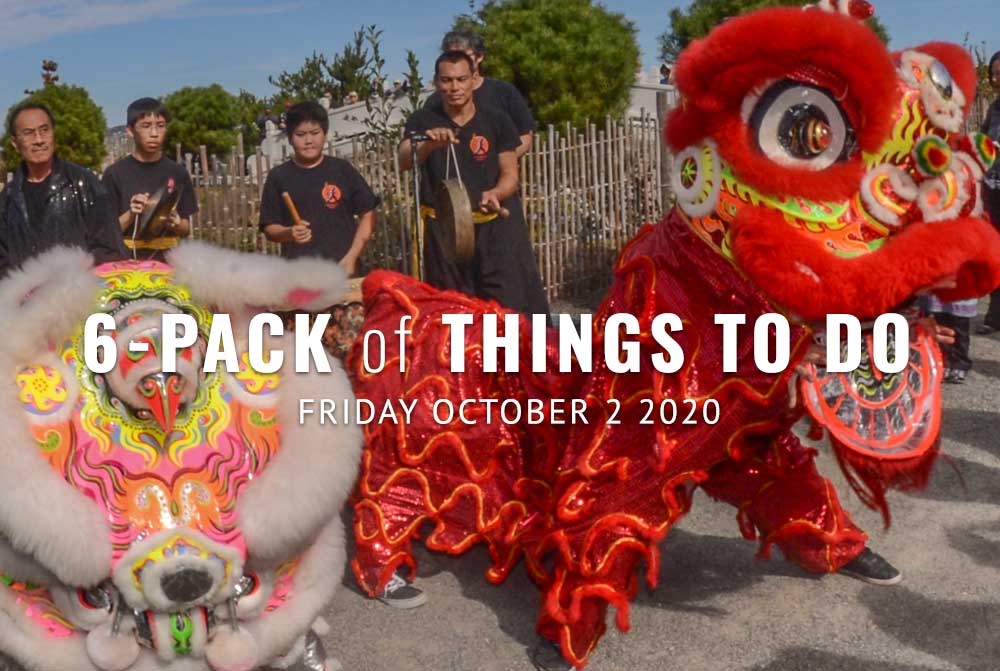 Hello! We’re back! Peaks & Pints apologizes for the sudden disappearance of 6-Pack of Things To Do. We brewed our new house beer, Pop-Up Park IPA, at Everybody’s Brewing in White Salmon over the past few days, which means we couldn’t see straight to write this treasure. Join us at our 4th Anniversary Party Nov. 1 when we tap the new beer. Now, on to 6-Pack of Things To Do: Friday October 2 2020. Cheers!

FESTIVAL: Presented by the Chinese Reconciliation Project Foundation, the Tacoma Moon Festival is an annual outdoor celebration held at the Chinese Reconciliation Park to honor the rich diverse cultures of the Puget Sound region, brought here by our immigrant communities over the 150 years of the city’s history. Due to the pandemic, the 8th Tacoma Moon Festival will not be a live, in-person event. Instead, the Moon Festival will be held virtually with dance and musical video performances, online Asian Teahouse, mooncake recipe, and more. Pair this virtual experience with Moonraker Brewing’s Citra Crush IPA from the Peaks & Pints cooler. Photos courtesy of chinesereconciliationpark.org

BEER FLIGHTS: Craft beer is best fresh. If you drink a fresh hop IPA the day it is bottled or canned, it will be at its peak. Never again will it taste so good. Day by day, by degrees, its lushness will fade. Beer, unlike vinegar and Pop Tarts, is not a fixed food product. So why then do brewers barrel-age beer? Because it’s porous, wood allows for very slow oxidation, which can make darker, malty beers more complex. Wood can also host microflora, bacteria that add the sourness to wild ales and lambics. The barrel’s former resident — the wine or whiskey or whatever that first made its home there — is also important. As a tenant, bourbon leaves the place smelling like vanilla, as does Cabernet Sauvignon, though to a lesser extent. Rum barrels soak up all that yummy, distilled sugar cane goodness for an aroma that is pure dark rum and flavor laced with sweet vanilla and spice notes. Today is National Barrel-Aged Beer Day. Therefore, we’ll celebrate the day with the to-go barrel-aged beer flight, Peaks and Pints Pilot Program: Barrel Aged On The Fly. 11 a.m. to 6 p.m., Peaks & Pints, 3816 N. 26th St., Basecamp Proctor, Tacoma

MARKET DAY: Once seen only as a calling card of fancy chefs, nutrient-dense microgreens are now making it onto plates in the home. Some studies have shown that microgreens have 175 percent nutrition than the adult plant. It is a source of nutrition that is also more environmentally favorable. They use less water and practically no fertilizer. The Tacoma urban farm Baby Chavs supplies fresh microgreens and herbs to the Lakewood Farmers Market, which sets up shop at Fort Steilacoom Park today. 2:30-6:30 p.m., 8714 87th Ave. SW, Lakewood

CLASSICAL: Before some performances in Tacoma involving string players, the audience has a good four or five drinks already downed before the show begins. And, during the performance, wobbly audience members will stuff cash into a tip jar. These two events most likely will not happen during Maria Sampen’s concert tonight. First, she’s a professor of violin at the University of Puget Sound whom has commissioned and premiered an impressive body of chamber works, collaborating with composers such as William Bolcom, William Albright, Bright Sheng, Marcos Balter, Andrew Mead, Robert Morris, Nico Muhly and Forrest Pierce. Second, the concert will be held virtually in the Schneebeck Concert Hall so after several Wander Brewing Fresh Cassette Hazy IPAs from the Peaks & Pints cooler, you can disrupt the “Jacobsen Series Broadcast: Faculty Recital with Maria Sampen, Violin” — although her performance will no doubt warrant a couple bucks in a violin case. 7:30-9 p.m., Schneebeck Live, no cover

THEATER: There is nothing wrong with your screen. Do not attempt to adjust the picture. Tacoma Little Theatre is controlling transmission. If they wish to make it louder, they will bring up the volume. If they wish to make it softer, they will tune it to a whisper. They will control the horizontal. They will control the vertical. They can roll the image, make it flutter. They can change the focus to a soft blur, or sharpen it to crystal clarity. For the next hour, sit quietly and they will control all that you see and hear. You are about to participate in a great adventure. You are about to experience Spacies, a serial space opera in the style of yesteryear, part three. The story follows Commander Rash Blasterbelt and Ensign Jock Junior, members of the Intergalactic Space Guardians, as they travel through the cosmos to defend the innocent. Pair this space theater experience with Old Schoolhouse Brewery’s K-POWW Fresh Hop from the Peaks & Pints cooler. 8 p.m., Tacoma Little Theatre Zoom

MOVIE: The Grand Cinema will stream Oliver Sacks: His Own Life in their Virtual Screening Room. The films explores the life and work of the legendary neurologist and storyteller, as he shares intimate details of his battles with drug addiction, homophobia, and a medical establishment that accepted his work only decades after the fact. Sacks, known for his literary works Awakenings and The Man Who Mistook His Wife for a Hat, was a fearless explorer of unknown cognitive worlds who helped redefine our understanding of the brain and mind, the diversity of human experience, and our shared humanity. $12 movie