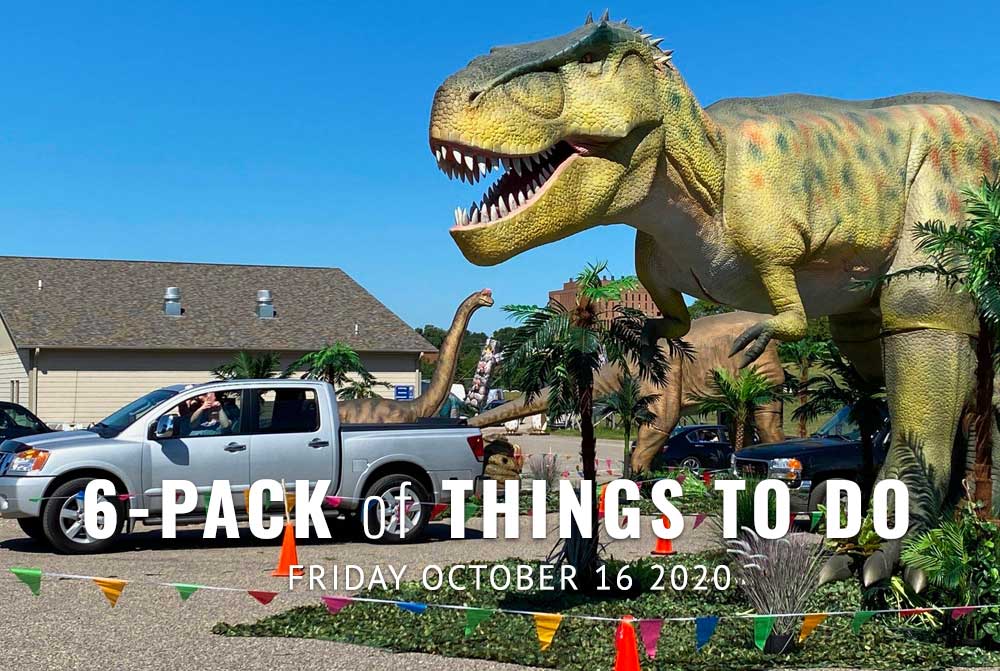 We should have made it a 7-Pack today with local letterpress star Jessica Spring doing her thing in King’s Book’s front window. But, alas, it’s another 6-Pack of Things To Do and it’s not too shabby. Cheers!

DINO-MIGHT: Theirs is a carbon footprint that resonates centuries later, and now, it’s truly possible to observe and understand the awesome power of the giant creatures that once walked the Earth! They now do the Puyallup! Embark on a Jurassic journey with Dinosaur Adventure’s audio tour that will guide you through their thrilling dinosaur drive-thru exhibit at the Washington State Fairgrounds. Mom and Dad can steer through the house that scones built while the carload encounter a massive Brachiosaurus, confront a pack of wild Velociraptors, and spin upside down in a mud puddle while a T-Rex crushes the vehicle (we’re checking on that last part). 9 a.m. to 8 p.m., Washington State Fairgrounds, 110 Ninth Ave. SW, Puyallup, $49-$109 online only, photo courtesy of Facebook

FARM: Nothing says “fall” quite like a trip out to a farm — and with Puyallup offering some terrific options; you have plenty of possibilities for exploration. Today, we focus on Sterino Farms, the bearer of fruit for many a local sour beer. Sterino sports a pumpkin patch and corn maze (with a nighttime option so bring the headlamps). Warm up with Fisher Scones 4-10 p.m. 10 a.m. to 10 p.m., Sterino Farms, 6006 52nd St. E., Puyallup, $8 corn maze

BEER FLIGHTS: If you drink enough mocha, you will come to realize that some are indisputably better than others. But, once you account for differences in quality, you have to admit, there’s a sort of sameness about them: espresso, bittersweet mocha sauce and steamed milk for a sweetly satisfying coffee. It almost makes you feel sorry for baristas. Why shouldn’t they get to experiment with flavors the way brewers do? Brewers incorporate coffee in their brew in several ways: mixing beans into the malt build, infusing during barrel aging or straight up cut the beer with cold press. With so many kinds of coffee and beer and so many ways to commingle them, no two hybrids are created equal. With that in mind, we have selected five mocha beers for our to-go flight, Peaks and Pints Pilot Program: Mocha On the Fly. 11 a.m. to 10 p.m., Peaks & Pints, 3816 N. 26th St., Basecamp Proctor, Tacoma

ORGAN AT NOON SERIES: In this modern world, oceans of electronic sound pour from headphones, vans, and your neighbor’s window. So who needs a pneumatic device big as a house? Well, listen to an organ like the Fritts at the University of Puget Sound Kilworth Memorial Chapel, and you won’t ask any more silly questions. Yes, the Fritts delivers. It’s clear throughout its range. It’s nimble, working with the building’s acoustics so melodic lines that otherwise might be submerged are easily audible, as you’ll discover when concert organist Wyatt Smith presents “Sacred Suites and Dances” on the Fritts. He’ll be puttin’ on the Fritts music by Emma Lou Diemer, Margaret Sandresky, and Brenda Portman. Noon to 1 p.m., Kilworth Memorial Chapel Broadcast via Schneebeck LIVE

THEATER: “The musical numbers are great, and are enlivened by Lexi Barnett’s choreography and by Michele Graves’ costumes,” wrote theater critic Alec Clayton reviewing Tacoma Little Theatre’s Gypsy production in the Weekly Volcano, March 2017. “Stephanie Leeper’s singing in particular is terrific, and the way in which Cassie Jo Fastabend transforms from the shy, no-talent Louise to the classy Gypsy Rose Lee is great acting. Jed Slaughter’s portrayal of Herbie is natural and seemingly effortless. His is a textbook example of good acting.” Tacoma Little Theatre gathers that 2017 Gypsy cast tonight for a fun banter and behind the scenes tell-alls. 7-8 p.m., TLT Zoom Room

MOVIE: Being a teenager is hard enough already without having to also conceal who you truly are — amidst the chaotic environment of school. Introducing Dating Amber, a heartwarming and hilariously acerbic comedy-drama set in rural Kildare, Ireland, in the mid-90s, following Amber (Lola Petticrew) and Eddie (Normal People‘s Fionn O’Shea), two closeted teenagers who are trying to come to terms with their queerness, deciding in the meantime to date each other — to hilarious and heartbreaking effect. Stream this delight in The Grand Cinema’s Virtual Screening Room while enjoying a Guinness from the Peaks & Pints cooler. $12 movie, photo courtesy of Samuel Goldwyn