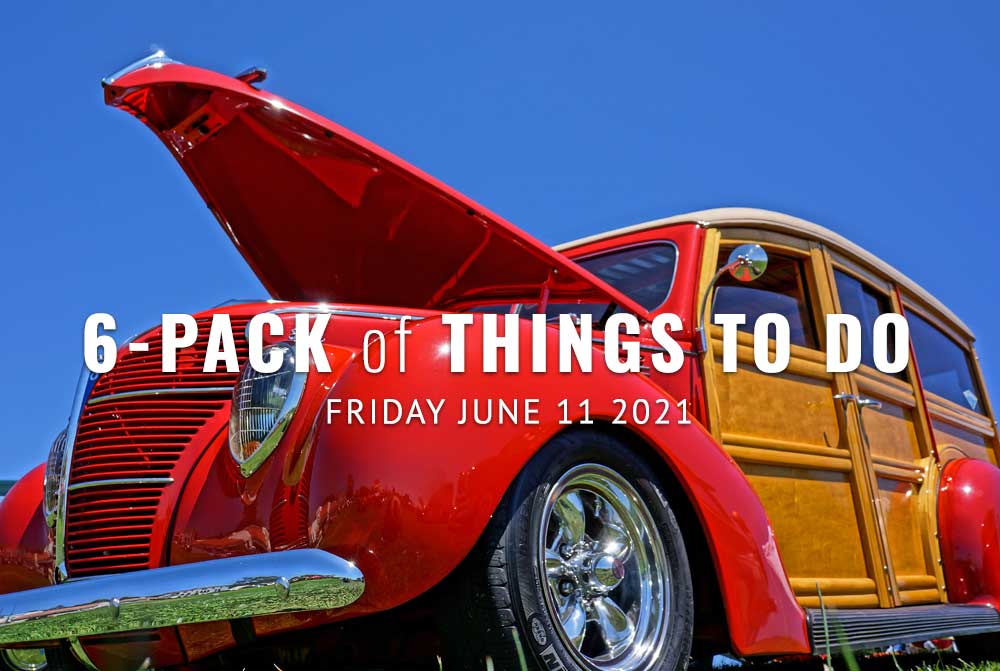 You’re gonna “crush” it, you’re gonna pwn it, you’re gonna kill it and conquer it and lord over it like some sort of scowling fur-lined dragon-humping wizard from the Lost Kingdom of HR Puffinstuff Now Streaming on HBO. You’re going to rule Friday, and 6-Pack of Things To Do: Friday June 11 2021 has your back. Cheers!

DADS: LeMay — America’s Car Museum hosts their ninth annual Hoods Up for Father’s Day through July 1. It’s hoods up at the car museum in Tacoma with more than 100 engines on display in celebration of Father’s Day. This unique perspective will include a wide variety of vehicles, showcasing the evolution of these marvelous machines. 10 a.m. to 5 p.m., 2702 E. D St., Tacoma, $10-$18, photo courtesy of Damian Gadal

BEER FLIGHT: It’s National German Chocolate Cake Day! And, Betty Crocker, get your booze on — Peaks & Pints’ German chocolate cake to-go flight could be the sweetest thing to ever hit your lips and liver. It tastes like German chocolate cake but will probably give you fewer cavities and more gusto in your game. But be warned: The beers are delicious and potentially addictive. Stop by and grab Peaks and Pints Pilot Program: German Chocolate On The Fly. 11 a.m. to 11 p.m., 3816 N. 26th St., Basecamp Proctor, Tacoma

ART: Joe Feddersen, a member of the Confederated Tribes of the Colville Reservation, will be in the Museum of Glass Hot Shop today. The Omak, Washington, resident been featured in numerous national exhibitions and was the subject of a major retrospective exhibition and monograph, Vital Signs, organized in conjunction with Froelick Gallery and the Hallie Ford Museum of Art at Willamette University in Salem, Oregon. During his MOG residency, Feddersen plans to incorporate the methods used in his printmaking into glass, emphasizing transparent layers and textures. 10 a.m. to 5 p.m., Museum of Glass, 1801 Dock St., Tacoma, $5-$17, photo courtesy of jordanschnitzer.org

FILM: It’s not Breakin’ 2: Electric Boogaloo, but The Grand Cinema screens In the Heights — a bright, vibrant crowd-pleaser that celebrates all the joys of summer in the city. Director Jon M. Chu puts the movie musical’s songs front and center and creates an interesting hybrid approach to the unreality of the genre. The film is a buffet of sight and sound that succeeds as a summertime musical. 1:30, 4:35, and 7:45 p.m., 606 S. Fawcett, Tacoma, $6.50-$11, photo courtesy of YouTube

THEATER: Does this sound familiar? You know where you wanted to be. Home. Home. Why couldn’t you just stay at home? Oh yeah. That’s where the kids were. Well, that was no good. Sanity’s short and thin enough as it was. You sent them away to be in a Tacoma Little Theatre play. Many other parents did the same. It was something for those who love their kids … but were sick of them. Well, as know, it paid off. Your kids are stars! And, it’s time for them to have their say. Tonight, Tacoma Little Theatre hosts a special episode of “Castmates” as TLT Managing Artistic Director Chris Serface talks to the young performers and their adult counterparts who have been featured in TLT’s mainstage shows. What will the kids say? Tune in! 7-8 p.m., TLT Castmates Zoom Room, free

COMEDY: Tonight, the Tacoma Comedy Club hosts Jared Freid, a comedian based out of New York City by way of the Boston suburbs. His comedy is current and reflects the ordinary daily thoughts of everyone you know, especially if everyone you know is a millennial, obsessed with dating apps, trying to be a real adult and worried about their body. (For the record, Jared’s mom thinks his body is “just fine”). 7:30 and 10 p.m., 933 Market St., Tacoma