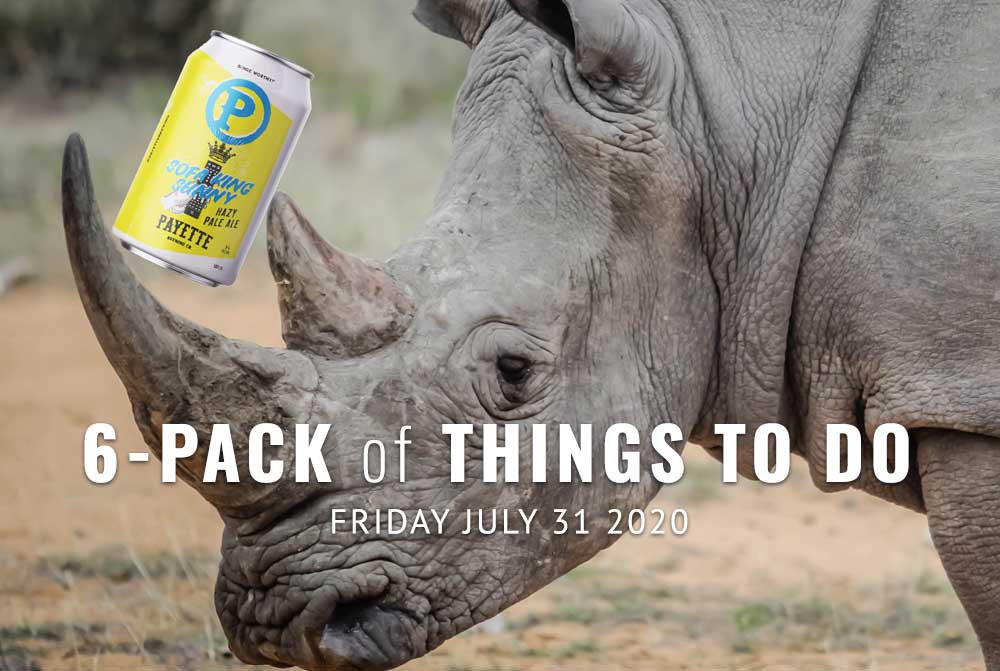 Happy Friday! Some traditions can’t be stopped by a pandemic … but they can certainly be transformed. Today, organizations young and old will be on the scene both physically and virtually. You can party along with them at home … or out on the streets, even while wearing a Santa hat. Enjoy today’s 6-Pack of Things To Do!

ANIMALS: The capture, killing, dismemberment, smuggling and sale of wild animals have major negative impacts on life on Earth — impacts that extend far beyond cruelty to individual animals or the extinction of species. Global wildlife crime, taken as a whole, destroys biodiversity, encourages corruption and disrespect for the rule of law, finances international crime syndicates and some armed insurgencies, and destabilizes entire nations and regions. The world’s five species of rhinos are at risk, largely from poaching for their horns. At the beginning of the 20th century, it is estimated that there were 500,000 rhinos across Africa and Asia. There may be as few as 27,300 today. The fine folks from Point Defiance Zoo & Aquarium’s fundraising group Drinking For Conservation will host Rowdy For Rhinos (Virtual Edition), a Zoom conservation about rhinos while toasting them with beer, cider and/or wine. Peaks and Pints suggests Payette Brewing’s Sofa King Sunny Hazy Pale Ale from our cooler. 6:30-8 p.m., Drinking For Conservation Zoom Cage, passcode: 619704, donations to save rhinos here

BEER FLIGHT: Shaun Kalis and Devin Benware began brewing their Ruse beers on a big system before Ruse Brewing was a thing. When not brewing for Tomas Sluiter at Culmination Brewing, whom they originally worked under at the Old Market Pub & Brewery in Multnomah Village, they used Tom’s tanks to make their Ruse beer. Kalis and Benware moved into their big southeast Portland facility two years ago almost to the week. These guys are experts of adjunct ingredients and yeasty expressionism, and Peaks & Pints is thrilled to offer the to-go Ruse beer flight, Peaks and Pints Pilot Program: Ruse On The Fly. 11 a.m. to 8 p.m., Peaks & Pints, 3816 N. 26th St., Proctor District, Tacoma

GEM FAIRE: A treasure is in the eye of the beholder. Need yours be a bright and shiny stone? Or is a humble, dust-covered antique the more coveted find? Both can be uncovered this weekend. See gems, jewelry, beads, crystals, rocks and minerals from vendors 6 feet apart at the Gem Faire inside the Western Washington Fairgrounds. Expect fine jewelry, crystals, gems, beads, minerals, gold and silver, fossils and more, as well as jewelry repair, cleaning and ring sizing while you shop. Wear a bedazzled mask! Noon to 6 p.m., Ninth and Meridian, Puyallup

CHRISTMAS IN JULY: Right about now is when the heat becomes too much and we begin dreaming of a white Christmas to come and cool us all down. So what better way to mark that there are 21 shopping weeks left until Dec. 25 than with Rainier Growlers’ Christmas In July. It’s true. They’ve invited Fremont Brewing and other breweries to slide down their chimney and spread good will and great craft beer to all the good girls and boys, 21 and older of course, while we play holiday music and pouring jolly bourbon barrel stouts and winter ales. Noon to 9 p.m., July 31-Aug. 4, Rainier Growlers, 13105 Meridian E., South Hill Puyallup

MOVIE: Oscar-winning director Ron Howard in his first cinema vérité documentary, Rebuilding Paradise, vividly encapsulates the terror when a wildfire that ravaged Paradise, California in November 2018. The footage is culled from first responders’ body cameras and survivors’ cell phones. Those images plunge the audience into that horror, but then the story becomes a tale of resilience, following Paradise residents over the next year as they push past their shock and begin to reclaim their community. Stream Rebuilding Paradise in The Grand Cinema’s Virtual Screening Room while enjoying firefighter-owned Top Rung Rye Lager from Peaks & Pints cooler. $12 movie