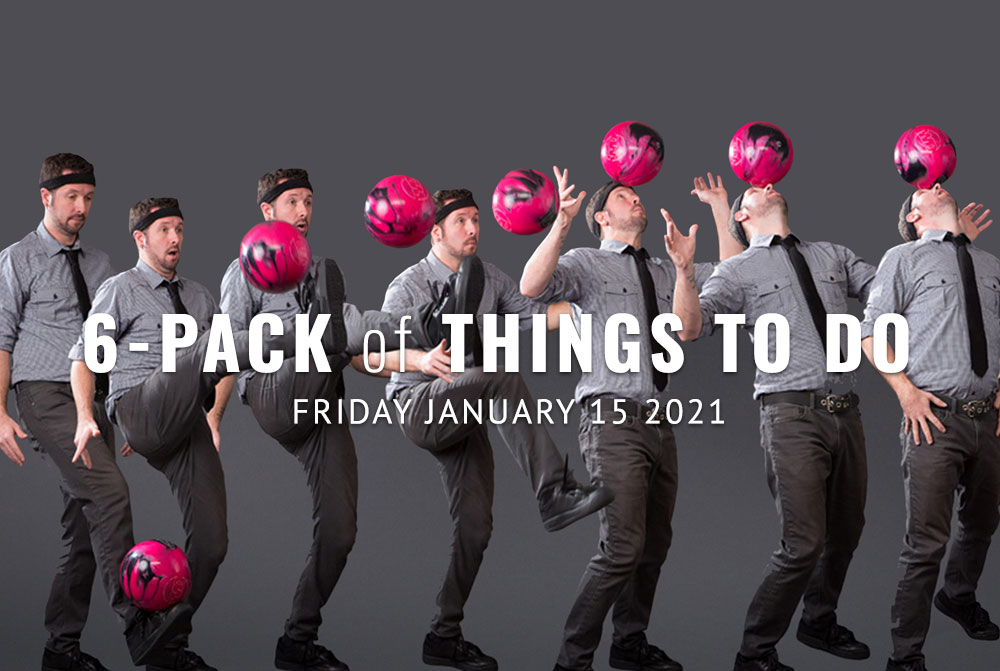 In short, Peaks & Pints 6-Pack of Things To Do reminds you that you are far from alone in your understanding that this is one hugely painful, incredibly difficult, unbearably gorgeous, terrifying, excruciatingly short life and sometimes the best you can hope for is to drink Trappist beers and watch MxPx and wonder at a man doing tricks with a bowling ball and enjoy the wildly animated, kaleidoscopic, convoluted, maddening, ever-morphing ride. Cheers!

STUNT SHOW: Ever been hit in the head with a bowling ball? Matt Baker has. It’s his thing. The comic who’s been voted Seattle’s “Best Alternative Comic,” holds five Guinness World Records and appeared on Tosh.0 and America’s Got Talent — rests the bowling ball in the contour between his foot, ankle and leg. With a flick of his foot, the hefty ball flies into the air and lands with gasp-worthy grace on his forehead, where it rests. Stunts like this, paired with self-deprecating stand-up makes The Matt Baker Comedy + Stunt Show much different than your typical comedy stage gig. The Tacoma Musical Playhouse will stream his show tonight through an afternoon performance on Sunday. 7 p.m., TMP Stunt Room, $25 here

BEER FLIGHT: In a time where American craft beer is more obsessed with hazy IPAs, pastry stouts and sour ales, it’s refreshing to revisit Trappist ales, which Peaks and Pints will be aiming our daily to-go beer flight toward, a flight we call Peaks and Pints Pilot Program: Trappist On The Fly. Of the many thousands of beers produced around the world, only 14 monasteries — six in Belgium, two in the Netherlands, and one each in Austria, Italy, England, France, Spain, and the United States — currently produce Trappist beer as recognized by the International Trappist Association. Peaks & Pints offers a to-go flight to taste half of them. Cheers! 11 a.m. to 8 p.m., 3816 N. 26th St., Basecamp Proctor, Tacoma

ART: “William Hoppe’s The Mute Siren is another excellent abstract painting which interweaves a number of similar forms — forms within forms,” writes Alec Clayton, art critic for the Weekly Volcano. “There is a square made of smaller light gray and white squares inside a field of light brown, and it is overlapped and interspersed with rows of red, yellow and orange squares, and behind all of this are almost invisible circles.” Take a moment to slow down this week with a guided meditation focused on The Mute Siren, a work in the Tacoma Art Museum Collection. Led by Hien Hong, this short video encourages you to slow down and focus on the present moment. Photo: The Mute Sire, by William Hoppe, (born Portage, Wisconsin, 1945), 1981, acrylic on canvas, 94 x 94 in. (238.8 x 238.8 cm, triptych), gift of Virginia and Bagley Wright

THEATER: The cast from Tacoma Little Theatre’s 2017 production of The Man Who Shot Liberty Valance will reunite to share their experience of putting on this classic Western. “Longtime and much celebrated Tacoma theatrical director David Domkoski directs his last show in Tacoma before moving to the East Coast,” writes Weekly Volcano theater critic Rev. Adam McKinney. “The play is The Man Who Shot Liberty Valance. This modern classic set in the Wild West in 1890 is based on a short story by Dorothy M. Johnson. I will not go into how all this plays out but will only say it is a strong, meaningful and emotionally engaging story that is well acted and is totally believable.” Log on, ask questions or just sit back and hear about their experiences. 7-8 p.m., TLT Castmates Zoom Room, free

FILM: For a masterclass in documentary editing, consider Some Kind of Heaven, which streams in The Grand Cinema Virtual Screening Room. An oddly stylistic glimpse into life in the Villages retirement-community in Florida — this debut film from Lance Oppenheim is an unsettling yet strangely enjoyable film. Behind the gates of a palm tree-lined fantasyland, four residents strive to find solace and meaning. $12 for 7-day rental here, photo courtesy of Magnolia Pictures

MUSIC: Bremerton punk legends MxPx have been playing with a dangerously youthful hysteria for nearly 30 years. Guitarist Yuri Ruley and drummer Tom Wisniewski are a tight combination of pulsing notes and solid beats, and Mike Herrera’s undulating bass line and strenuous vocals is the funky, nasty glue keeping it all together. Over the last nine months they created Between This World and the Next!, and will release it tonight on the Internet. 6:30 p.m., MxPx Online, $30 here