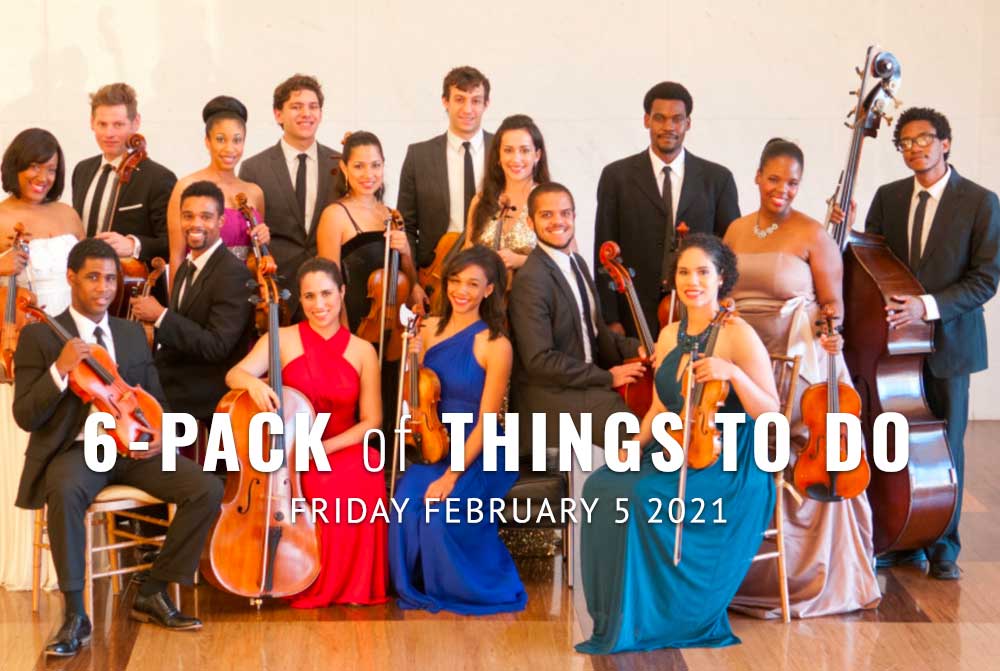 The jam is live in effect, and I don’t waste time on the mic with a dope rhyme. On to 6-Pack of Things To Do!

CLASSICAL: Led by the University of Puget Sound’s School of Music in partnership with African American Studies, Tacoma Public Schools, Tacoma Youth Symphony Association, and the Tacoma Youth Chorus; the Jacobsen Series: Sphinx Virtuosi will be performed virtually via Schneebeck LIVE. Sphinx Virtuosi Chamber Orchestra is one of the nation’s most dynamic professional chamber orchestras, comprised of 18 top Black and Latinx classical soloists. This broadcast is part of a multi-event residency with Sphinx, a Detroit-based national organization dedicated to transforming lives through the power of diversity in the arts. 7:30 p.m., Schneebeck LIVE, free

BEER FLIGHT: Bryan Shull’s grandfather and father worked at and retired from Great Western Malting Company located at the Port of Vancouver USA, which makes Trap Door Brewing a fourth-generation Vancouver beer family-owned business. Shull, who left a 25-year career in renewable energy engineering to start a brewery with his two sons, Zakary and Zane Singleton, opened the 15-barrel facility in the Uptown neighborhood of Vancouver in October 2015 because he loves beer and the community of people that make up the brewing industry. Dave Forster, a silent owner, and Michael Parsons, taproom general manager, joined the venture. In October 2020, Kyle Larsen replaced Zane as head brewer. No doubt Larsen can continue the Trap Door medal-winning ways as he has a long pedigree, beginning in 2007 brewing at Full Sail, followed by head brewer status at Double Mountain, then head brewer at Siren Brewing in Reading, England. Peaks & Pints received new shipment of Trap Door beer, so naturally it’s our to-go flight of the day, Peaks and Pints Pilot Program: Trap Door On the Fly. 11 a.m. to 10 p.m., 3816 N. 26th St., Basecamp Proctor, Tacoma

CREATIVE WRITING: Pacific Lutheran University Associate Professor of English Wendy Call hosts The Daily Writer, a 15-day, 15 author interview series, which began Jan. 20, as an introduction to creative writing class. Today, Call interviews Anastacia-Reneé, a multi-genre writer, educator, and interdisciplinary artist. She is the recipient of the 2018, James W. Ray Distinguished Artist Award for Washington artists (Artist Trust), and has served as the Seattle Civic Poet from 2017-2019, and the 2015-2017 Poet-in-Residence at Hugo House. Learn how Rugero gets creative. 4-5 p.m., PLU Zoom Room, free but must register here.

BALLET: Through February 2021, Tacoma City Ballet hosts “Trailblazers of American Ballet: A Tribute To Black Excellence,” an illumination of the seven Palladian windows in their balcony housed in the Merlino Art Center for all to see outside. This exhibit pays tribute to the pioneers of Black Ballet in America, such as Katherine Dunham (1909-2006) and Janet Collins (1917-2003). Dunham was a dancer, choreographer, creator of the Dunham Technique, author, educator, anthropologist, social activist, and had one of the most successful dance careers in African-American and European theater of the 20th century. Collins was a ballet dancer, choreographer, and teacher with performances on Broadway, in films, and appeared frequently on television. 5:30-9:45 p.m., through Feb. 28, 508 6th Ave, Tacoma, free

THEATER: The cast from Tacoma Little Theatre’s 2017 production of Seussical: The Musical will reunite to share their experience of putting on this amazing tribute to all things Seuss! “No use mincing words: Seussical … is a supremely open-hearted, deliriously goofy spectacle …,” writes Weekly Volcano theater critic Rev. Adam McKinney. “This is a vivid, boisterous, and exhilaratingly staged production, a tornado of a show that somehow manages to find the perfect balance of a breakneck pace, an enormous (and enormously talented) cast, a top-notch design on all fronts, and a legitimately moving story at the center of it all. This is not only the best show I’ve seen at TLT, but could possibly be the best piece of theater I’ve seen since I started writing about the art in this fine rag.” Log on, ask questions or just sit back and hear about their experiences. 7-8 p.m., TLT Castmates Zoom Room, free

FILM: M.C. Escher’s art is on every sort of merch, psychedelic poster and album art, millions of tattoos, has inspired films from Labyrinth to Inception, and graced every college dorm room wall — but it was decades after his death in 1972 before the world finally started getting proper museum shows dedicated to his career. In the new documentary film from Robin Lutz, we find out just how he felt about that — and about a great deal more besides. Composed entirely from M.C. Escher’s correspondences (voiced by Stephen Fry) and interviews with his family, M.C. Esher: Journey To Infinity highlights Escher’s evolution as an artist. Grab a Breakside Brewery Great Awakening from the Peaks & Pints cooler and stream the film in The Grand Cinema’s Virtual Screening Room. $12 rental