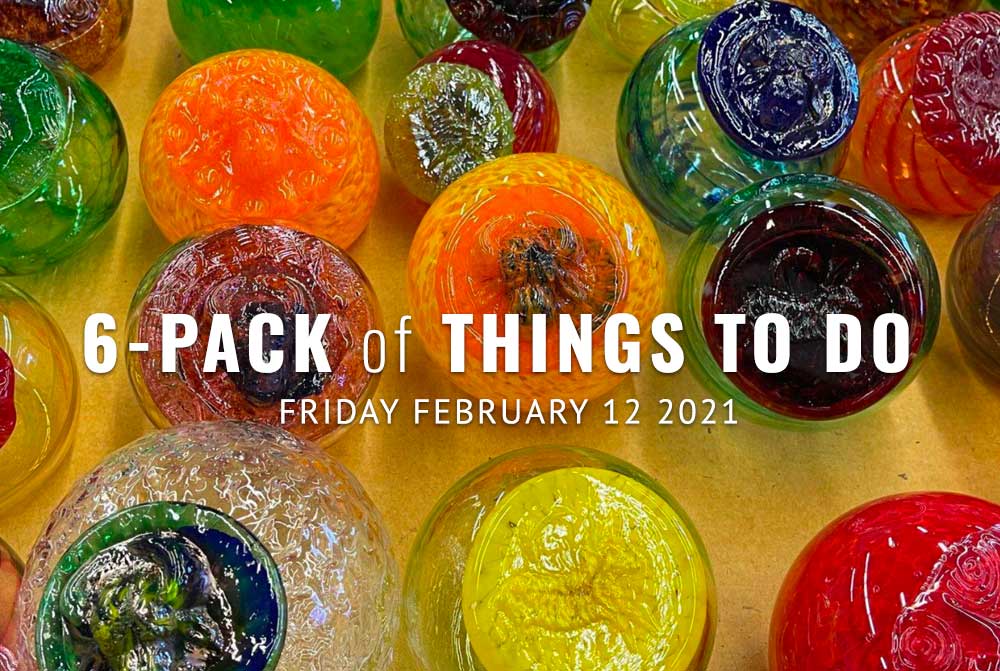 Due to the weather, Peaks & Pints should have listed only events that could be streamed from the comfort of your home, but there are Monkeyshines to find and coconut stouts to gather. 6-Pack of Things To Do: Friday February 12 2021 is on!

MONKEYSHINES: Monkeyshines has unleashed marauding gangs of craftspeople, artisans, and their multitudinous admirers on the genteel people of Tacoma. The Tacoma art project known as Monkeyshines hid hand-blown glass balls and other forms of art throughout the streets and neighborhoods of Tacoma. Monkeyshines first became a news item in 2003, when they gave away more than 200 glass balls in honor of the Chinese Year of the Monkey. The following year, in honor of the Chinese Year of the Rooster, 300 glass medallions emblazoned with the profile of a rooster were hidden throughout Tacoma. This year marks the 18th year of the Monkeyshines, and there’s no sign of it coming to an end. More than 100 people crafted 2500 one-of-a-kind Monkeyshines. Run for your art! Photo courtesy of Hilltop Artists

BEER FLIGHTS: The National Weather Service has issued a Winter Storm Warning for the greater Tacoma area. Today’s forecast calls for 1-3 inches during the day, and another 3-6 inches during the night. Some beers can only be understood in apocalyptic conditions, when roads disappear, and weather analysts show real fear. A great snow beer will fuel you through hours of shoveling. A great snow beer is fuel — deep dark rich warming. A great snow beer will remind you of warmer times and incite tropical travel plans. A great snow beer is a coconut stout. Coconut is an increasingly popular flavor in beer, and it fits best alongside the chocolate and roasted flavors of a stout. Throw on your parka, grab the sleigh, and head to Peaks & Pints for our to-go flight of coconut stouts — a flight we call Peaks and Pints Pilot Program: Coconut Stouts On The Fly. 11 a.m. to 10 p.m., 3826 N. 26th St., Basecamp Proctor, Tacoma

GRAF RELEASE: If beer and cider had a baby it would be a graf — both distinctly different from and greater than the sum of its parents. What’s in a graf? Sometimes spelled “graff,” never “giraffe,” this lesser-known drink brings together cider and beer. Incline Cider and Wingman Brewers brewed a graf — Wingman lager’s blended with Incline’s Marionberry cider — and it will be released this afternoon. Titled NOURISH, with all proceeds of the graf will be donated to local food bank Nourish Pierce County. 2 p.m., Incline Cider House, 2115 S. C St., Tacoma, no cover

THEATER: Have you been enjoying Tacoma Little Theatre’s “Castmates” reunions? Good news! There’s another one tonight! The cast from TLT’s 2018 production of Macbeth will reunite to share their experience of putting on this amazing Shakespeare adaptation. “Tacoma Little Theatre’s production of Macbeth is a success, and it’s largely due to the performances of Dylan Twiner (Macbeth) and Kathryn Philbrook (Lady Macbeth), who play their mutual zeal for the throne as a pastime of two ferocious lovers,” wrote Weekly Volcano theater critic Rev. Adam McKinney. Log on, ask questions or just sit back and hear about their experiences. 7-8 p.m., TLT Castmates Zoom Room, free

FILM: In a parallel present, delivery man Ray Tincelli is struggling to support himself and his ailing younger brother. After a series of two-bit hustles and unsuccessful swindles, Tincelli takes a job in a strange new realm of the gig economy: trekking deep into the forest, pulling cable over miles of terrain to connect large, metal cubes that link together the new quantum trading market. As he gets pulled deeper into the zone, he encounters growing hostility and the threat of robot cablers and must choose to either help his fellow workers or to get rich and get out. Stream Lapsis from The Grand Cinema’s Virtual Screening Room while enjoying a Fat Orange Cat Brew Co. Walkabout Passion Fruit Pineapple sour. $6.99 rental

MUSIC: Maybe Peaks & Pints use to hang out in the AOL Pearl Jam chat room. Maybe we body-surfed right in front of Vedder before being escorted away from the Mercer Arena, circa 1993. Certainly we’ll be streaming the second night of their 2018 concert at Safeco Field tonight. Indeed, Seattle-bred grunge staple Pearl Jam will stream the 37-song set, mixed in stereo and 5.1 digital surround sound by Pearl Jam Producer, Josh Evans. This never-seen-before full-color footage was captured using multiple HD cameras by touring video director Blue Leach and edited by PJ archivist Kevin Shuss. 8 p.m., nugs.net, $14.99